A group of local and regional officials this week signaled their support for Metro to move ahead with efforts to place a transportation measure on the November 2020 ballot, but expressed some concerns about the timeline.

Metro took the reins of the measure from TriMet in November after regional leaders realized there was not enough time before the 2018 election to reach a compromise about what other congestion-relief and safety projects would be included in the measure in addition to funding for the $2.4 billion Southwest Corridor light-rail line.

Metro staff have been developing a work plan, and on Monday, sought feedback from the finance subcommittee of the Joint Policy Advisory Committee on Transportation, a group that includes elected officials and representatives of transportation agencies in the region.

"With more than 110 people moving to the Portland-metro region every day … our region is really feeling the growth: the congestion, the unpredictability and the lack of those different transportation options," Metro Councilor Craig Dirksen said. "We have a lot to do if we're going to address the need in a way that's going to meet the needs of our future. I know that we're all committed to try to get it done."

Andy Shaw, Metro's director of government affairs, says it's important that the measure strikes a balance between the needs of three groups — cities, counties and agencies; advocacy and interest groups; and voters.

"The amount of community engagement, the amount of work with you to refine the messaging and projects, we can't emphasize enough how little time there really is between now and 2020," he said.

She said the council has expressed a desire that, in addition to funding the local share of the Southwest Corridor project, the measure is regional, provides for multiple modes of transportation, invests in projects that have been identified in local and regional plans, and supports other efforts such as economic development, affordable housing, equity and reducing gas emissions.

Early on, the process will include talking with officials and the public about what's important to them, identifying priority areas, analyzing which type of projects are feasible and which are not, and researching potential revenue sources and how much each could raise.

Frisbee said initial conversations with residents would focus on values rather than specific projects.

Frisbee said that as the process moves along and potential projects and revenue sources are identified, Metro will also conduct public opinion research to better understand what voters would support.

Metro staff say they plan to work with their partners and the public to identify potential investment areas and develop a list of projects for the measure by mid-2019, after which the council would then review the recommendations.

In early 2020, intergovernmental agreements would be negotiated to ensure that the projects are completed in a timely manner. The Metro Council would then decide whether to refer the measure to voters later that year.

"If you're going to the voters, you have to be able to deliver on the commitments you made," Frisbee said.

Some committee members had concerns about the timeline for selecting projects, saying it should be pushed up.

"I think we need to embrace that more quickly and talk about leaving more time for the engagement piece after we have agreed on what it is we're going to try to fund and build," Wilsonville Mayor Tim Knapp said.

TriMet general manager Neil McFarlane, who is retiring this year, said crafting the intergovernmental agreements isn't difficult, but more time needs to be given to cities and agencies to do the preliminary work necessary like engineering and cost estimates.

Leaders also spoke about the need to share with the public a bigger vision of what the region's transportation network could look like and how these and other investments would help bring it to fruition.

A community task force that TriMet had formed to help draft its planned 2018 measure will meet for a final time on Monday. The group is expected to come up with recommendations for Metro to consider during its process. 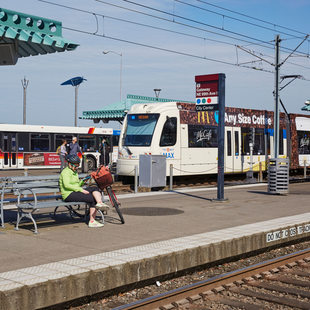