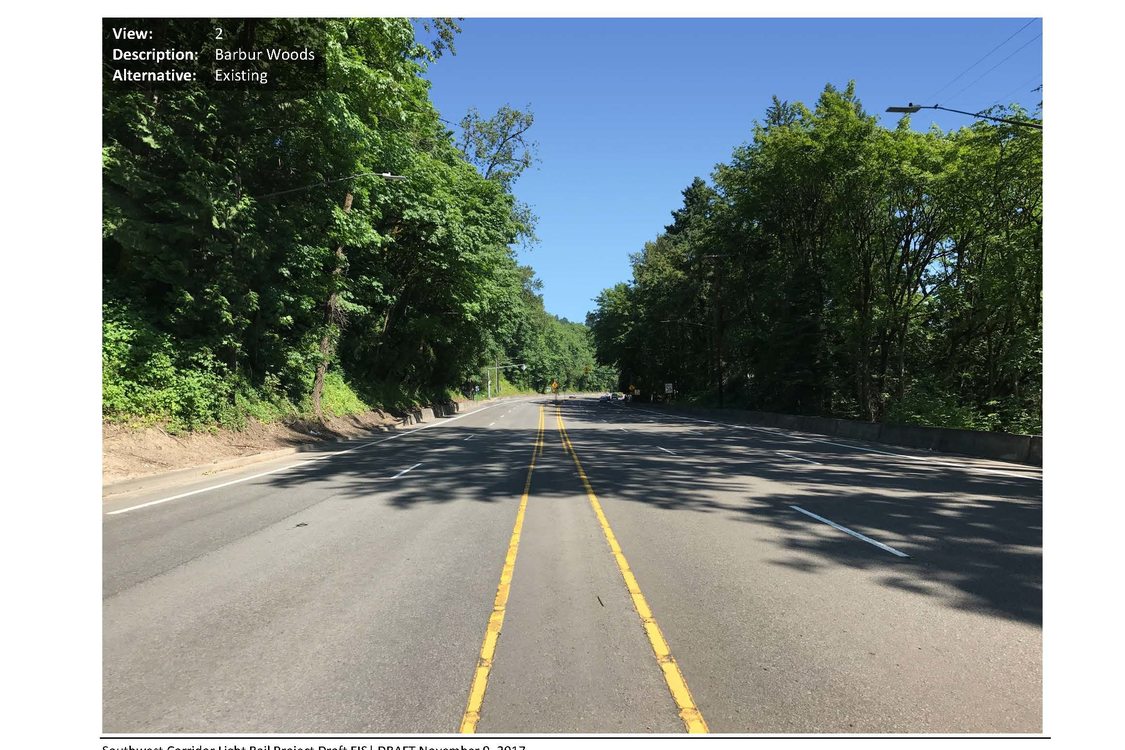 A photo of Barbur Boulevard near Barbur Woods. 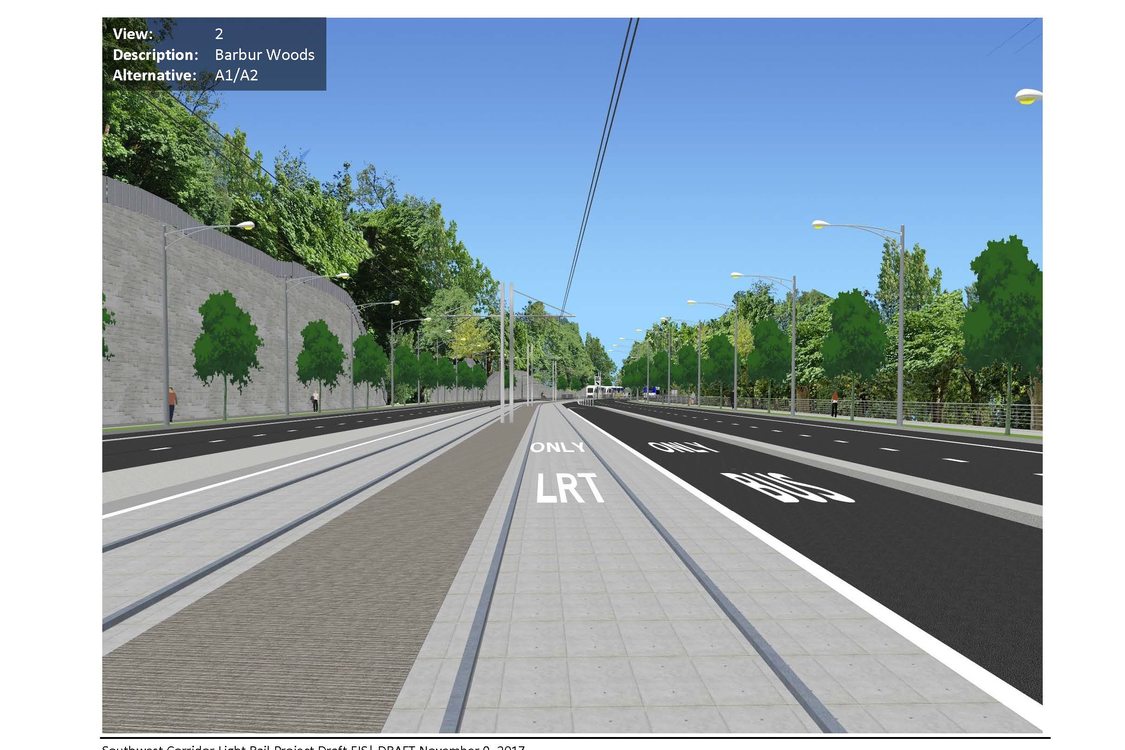 A computer-simulated image of what Barbur Boulevard near Barbur Woods would look like with a light rail lane down the middle. 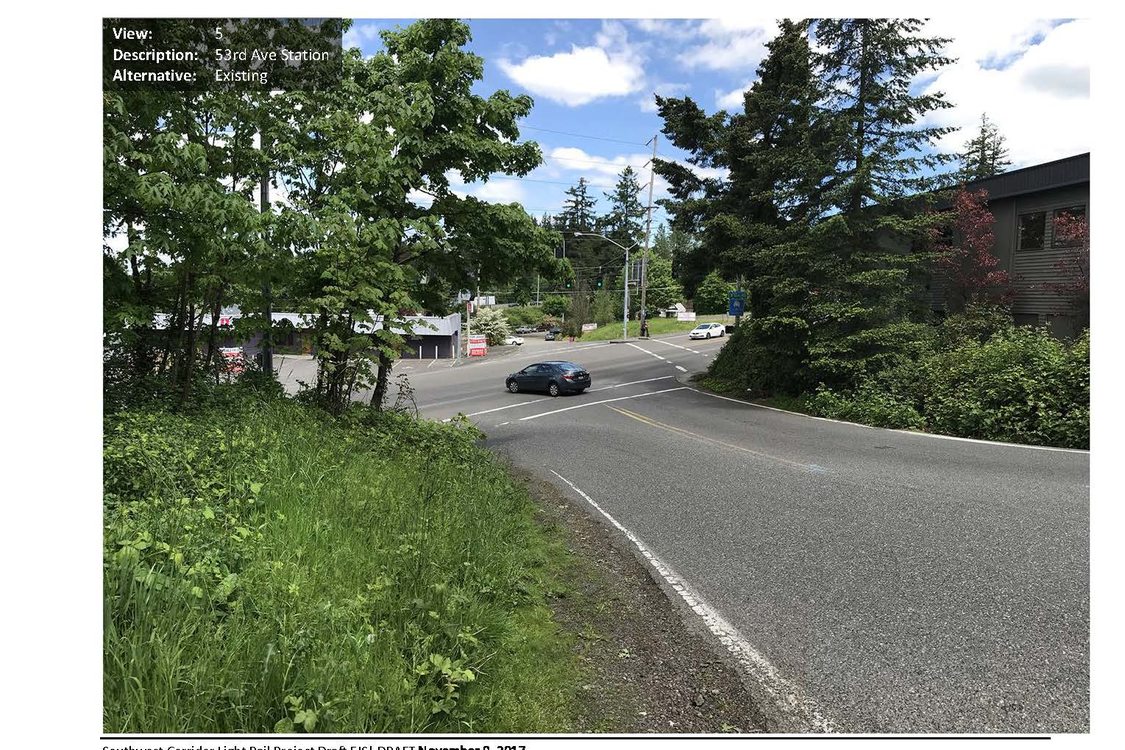 A photo of an intersection near Southwest 53rd Avenue 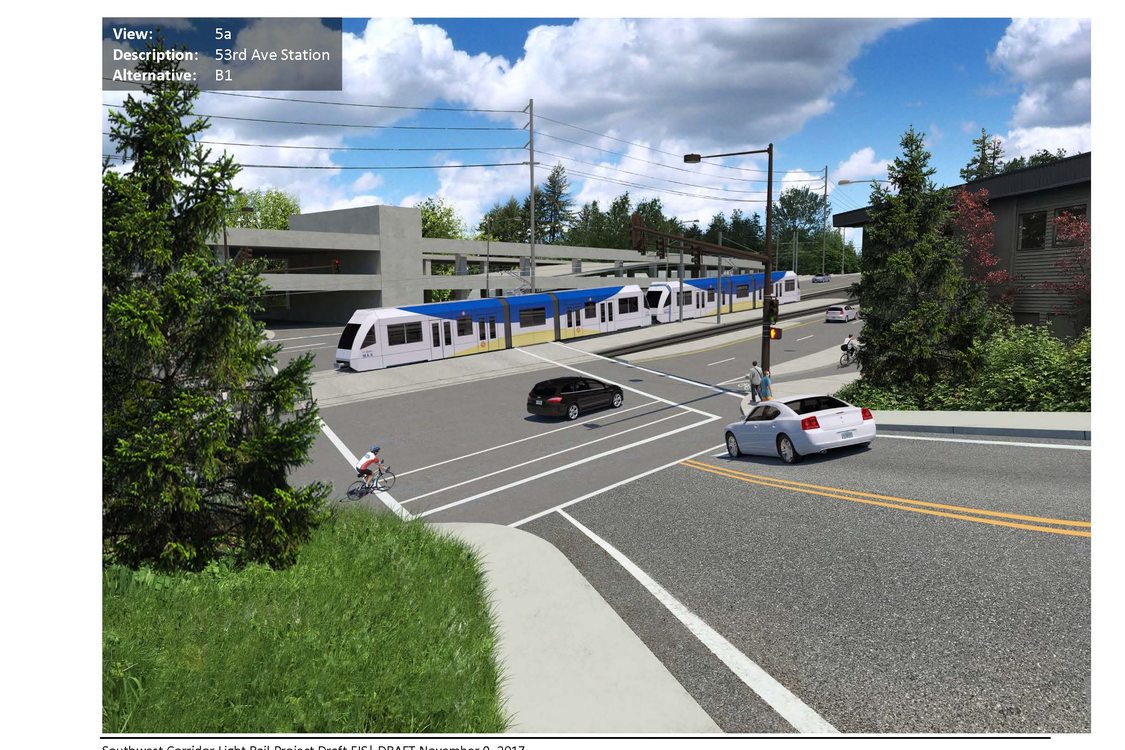 A computer-simulated image of Southwest 53rd Avenue with a light rail station and a train in the background.

Light rail has the potential to transform communities.

On Southwest Barbur Boulevard, the MAX line could run in the middle of the four-lane historic highway. This option would reconstruct Barbur to retain four traffic lanes plus continuous sidewalks and bike lanes.

Students from PCC Sylvania could walk from the campus to a station at Southwest 53rd Avenue. Drivers on Highway 217 in Tigard could see the light rail trains cross over on a new elevated bridge, connecting new transit-oriented development in the Tigard Triangle to Downtown Tigard.

These choices are available for review in a 300-page draft environmental impact study that details the impacts and benefits of a proposed light rail line in the Southwest Corridor. The 12-mile light rail line would run from downtown Portland to Tigard and Tualatin in Bridgeport Village.

A team of more than 50 people from Metro, TriMet and the Federal Transit Administration prepared the project’s draft environmental review. The team, which includes physicists, engineers, biologists and an anthropologist, compiled its findings over the course of a year and a half.

“We’re really excited to share the DEIS and hear from the communities that the new MAX line could serve,” said David Unsworth, director of project development and permitting at TriMet. “The comments we get during this stage will help define what’s important for the next several years of design and public engagement.”’

The study analyzes the transit project’s costs and benefits, environmental as well as social, compares several proposed routes under consideration, and explores ways to minimize negative impacts of the project. It also identifies the project staff's initial route proposal, which was publicly presented in March. This information along with public input will be considered by decisionmakers in selecting the final light rail route.

A regionwide transportation ballot measure in 2020 would help fund the project along with matching funds from the federal government. The project is competing with other transit projects across the country for matching federal dollars.

Environmental reviews and public input are required of projects seeking federal funding. Under the National Environmental Policy Act, federal agencies have to evaluate the environmental impacts of their decisions and consider alternatives to minimize impacts.

“In the past, the federal government funded new freeways, garbage dumps and electrical facilities without letting anyone know,” said Eryn Kehe, a Metro communications specialist. “That resulted in pollution and other negative impacts for the people who lived around those projects.

“Now we do things differently,” Kehe said. “We are asking for the public’s review and comment to make the project better.”

The DEIS helps bring transparency and accountability to projects, she said.

How to get a hold of the DEIS

The report is available on online. Physical copies are available at the following locations:

Metro Councilor Bob Stacey encourages people throughout the corridor to take a look at the report and offer feedback.

“This report is a starting point – it’s very much a draft.” Stacey said. “Now is the time for people who would be affected by the proposed transit project to review the report, see if there is anything in it that might need a closer look, and to let us and the federal government know."

The steering committee will review the DEIS on Monday, June 11 at Metro Regional Center. Visit a calendar of upcoming events to learn about upcoming public meetings and share your comments.

Read the executive summary and the draft environmental impact statement. Submit your comments online, by email or mail:

Order a copy on a CD for free, or a paper copy for a fee by sending an email with your request.