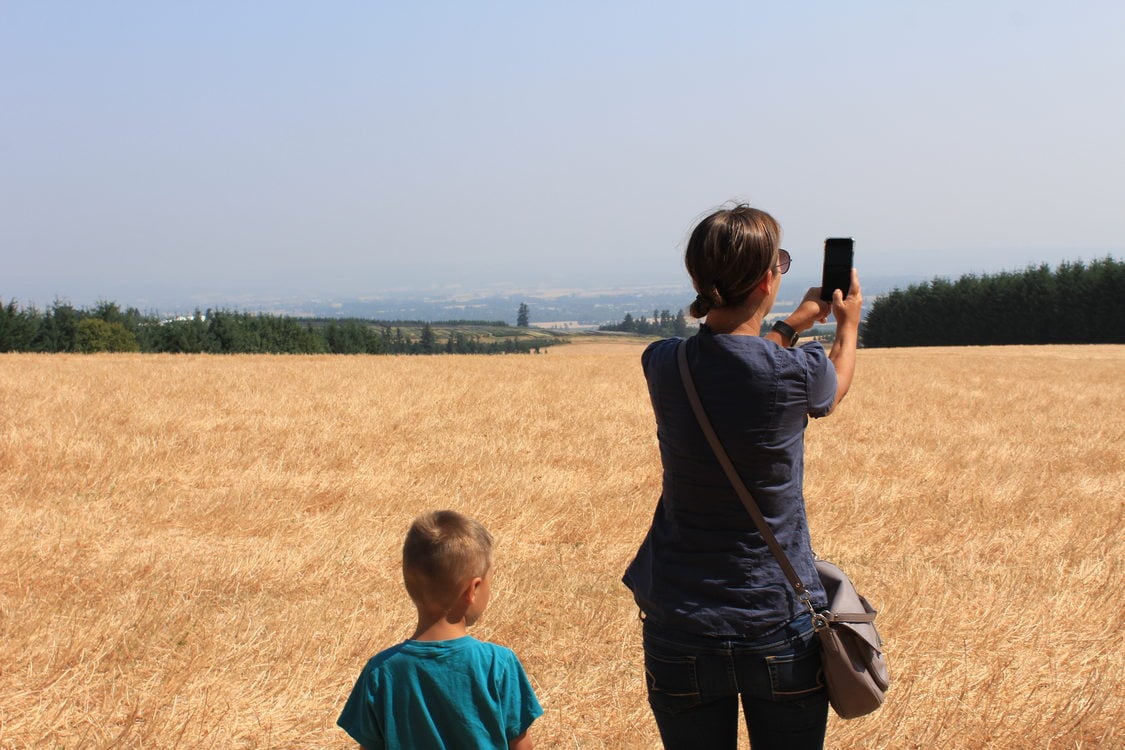 This view from Chehalem Ridge will one day be open to the public, after Metro's Natural Areas program purchased the 1,240-acre natural area in Washington County. On Thursday, the Metro Council and dozens of guests enjoyed a tour of the natural area.

This view from Chehalem Ridge will one day be open to the public, after Metro's Natural Areas program purchased the 1,240-acre natural area in Washington County. On Thursday, the Metro Council and dozens of guests enjoyed a sneak preview of the natural area. 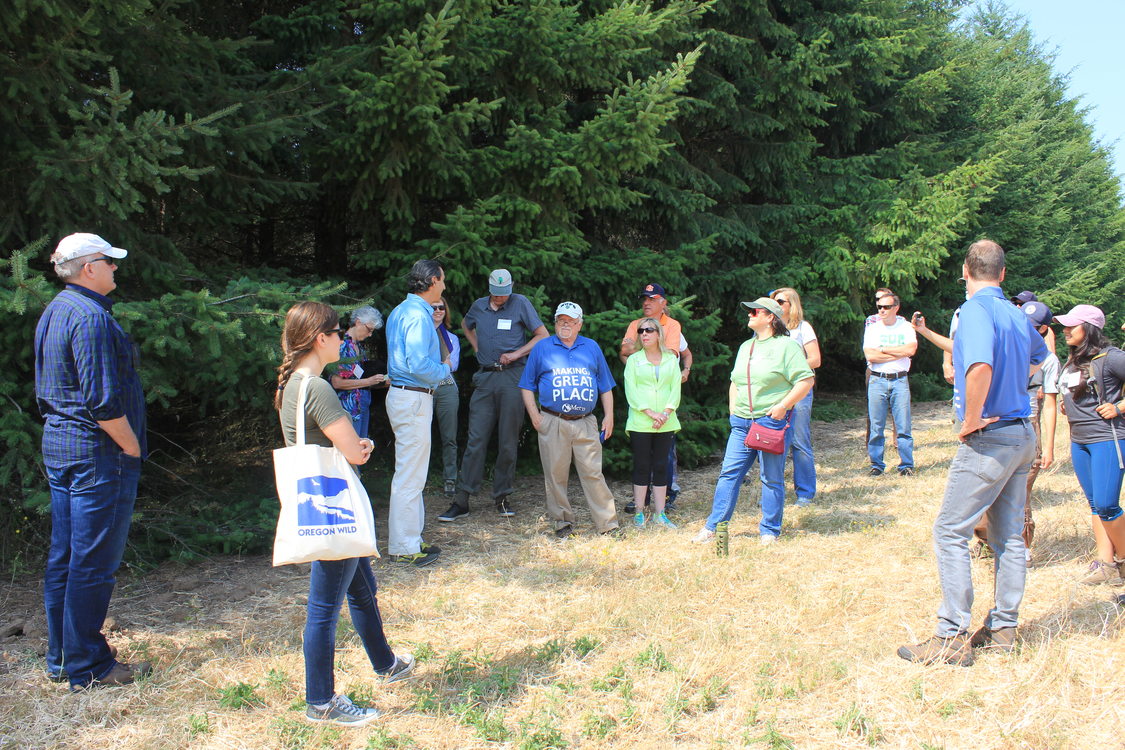 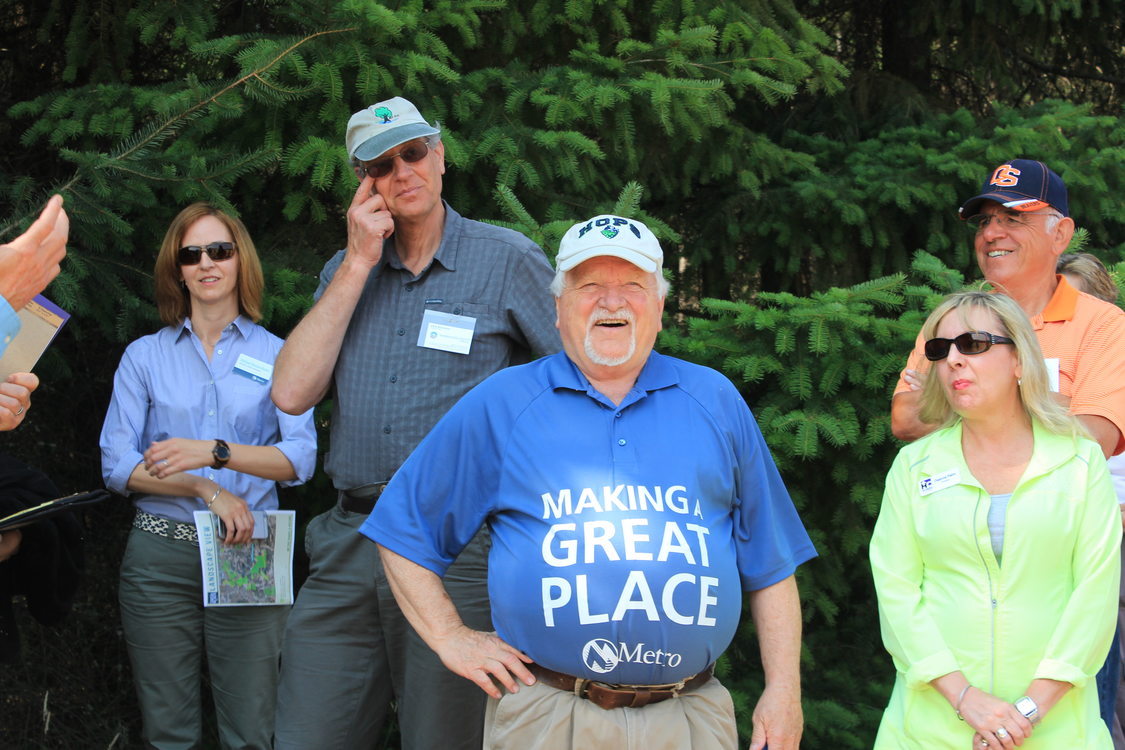 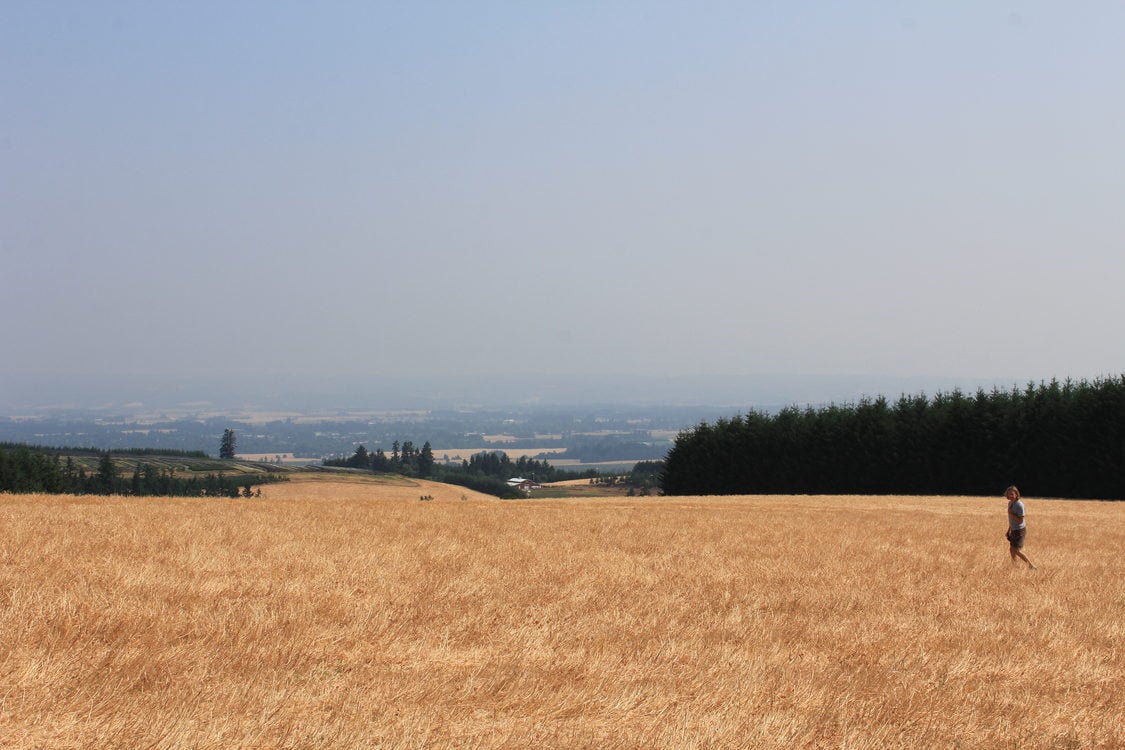 Although Cascade peaks normally visible from the viewpoint were obscured by summer haze, the view was extraordinary nonetheless. 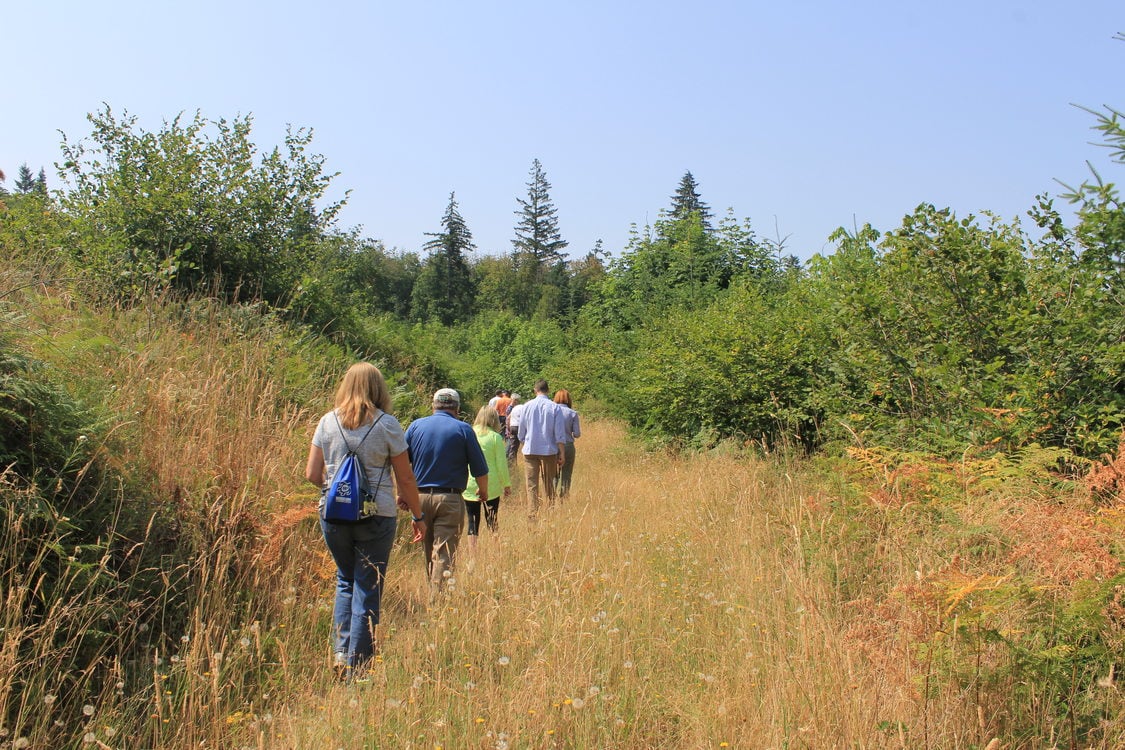 A short while later, the tour groups hiked down a short trail to a second viewpoint.

From the second viewpoint, people snapped photos looking west toward the small Tualatin Valley town of Gaston and the Coast Range. 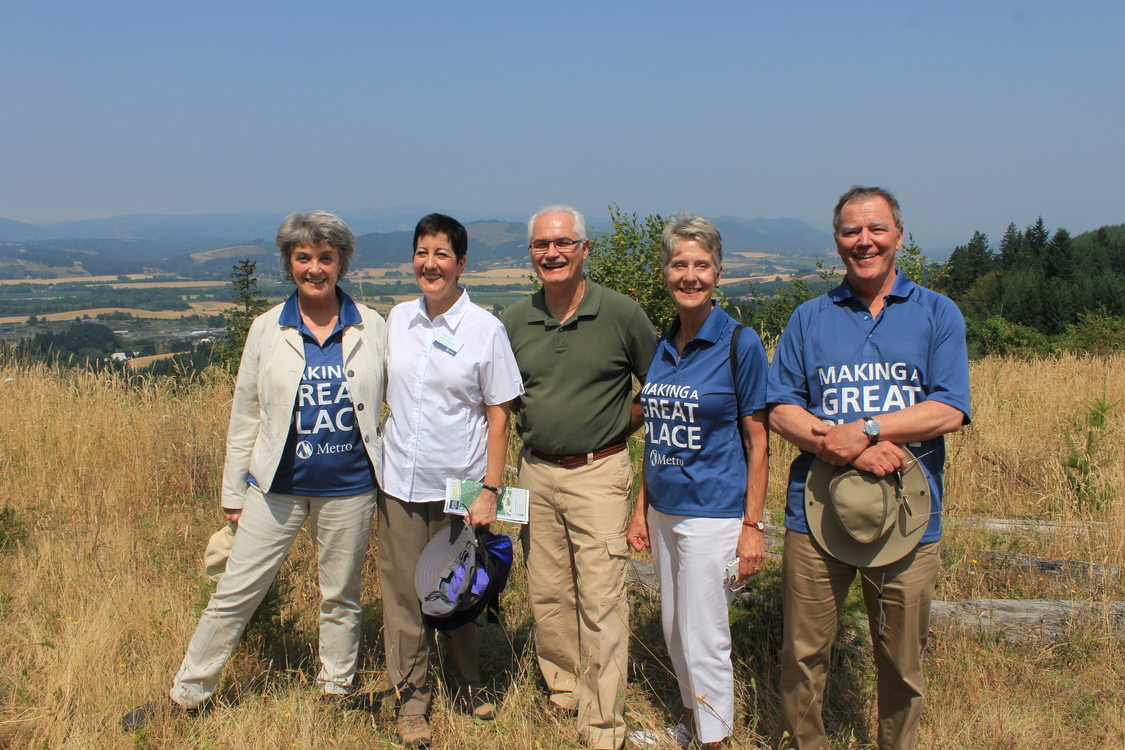 The three buses groaned uphill past century farms with high-bush blueberries and ripe, golden wheat in western Washington County, climbing a series of narrow but paved roads with names like Iowa Hill and Dixon Mill.

Finally they hit gravel and entered a ghostly Douglas fir forest, trees planted so thickly they blocked the bright July sun from supporting almost any life on the forest floor.

This is the "before" picture of Chehalem Ridge Natural Area, Metro senior natural resources scientist Kate Holleran told Metro councilors and representatives from several dozen nonprofits and local jurisdictions on one bus.

The picture was one of several glimpsed Thursday before and during a special meeting at the Centro Cultural de Washington County in Cornelius, as Metro's parks and nature staff shared updates on work to acquire, restore and open natural areas and parks in Washington County with money approved by the region's voters in 1995, 2006 and 2013.

Until recently, Chehalem Ridge was more crop than conservation project. Those trees were narrowly spaced to maximize the forest's harvest, not its habitat. And as the timber market and surrounding area changed, the owner was preparing the forest for another kind of crop: a rural subdivision closed to all but its residents.

Just another mile or so down the road on Thursday, the buses stopped and the passengers disembarked for a glimpse of an "after" picture of Chehalem Ridge. They walked through a section of forest selectively thinned and replanted with native groundcover. Nearby, Oregon white oaks found room to spread their canopies. At the woods' edge, expansive views stretched across the wheat fields and nurseries of the Tualatin Valley, though the Cascade peaks normally visible were obscured by clouds.

After hiking down to another viewpoint a few miles away, Metro councilors and guests snapped photos looking west toward the small community of Gaston and surrounding farmlands, the verdant folds of the Coast Range rising above.

It was easy to see why these views would sell at a high price to a few fortunate homebuyers.

But instead, Chehalem Ridge will be what the public wants it to be, because that's who it belongs to now.

Using voter-approved money, Metro purchased Chehalem Ridge for $6.1 million in 2010 – the largest single purchase in the history of the agency's Natural Areas Program. Restoration began shortly after the acquisition, but Metro is gearing up now for a process to plan future public access to the 1,240-acre natural area, said principal regional parks planner Dave Elkin.

A lot of potential uses could be on the table, depending on what the public thinks is most important. But no matter what happens at Chehalem Ridge, Elkin and others repeated Thursday, it will likely be a jewel in a growing regional parks and natural areas crown.

"I think as the years go by, the public is going to be more and more proud of this being in public ownership," said Don Goldberg, until recently a senior project manager with The Trust for Public Land who helped Metro with the purchase.

Down the hill in Cornelius that afternoon, people were still buzzing about what they'd seen on the ridge.

"We learned what a special place (Chehalem Ridge) is already – and what a dynamic destination it can grow into, literally," Metro Councilor Kathryn Harrington, who represents western Washington County, said in a packed auditorium at Centro Cultural as the Metro Council began a special meeting.

At the meeting, Metro councilors received an extensive update on how Metro parks and nature staff is using voter-approved money to acquire, restore and provide public access to nature throughout the region and in Washington County.

Opening the presentation, interim parks and nature director Kathleen Brennan-Hunter displayed a regional map of Metro's growing parks and natural areas system, with about a dozen new parks, trails and canoe and kayak launches slated to open in the next few years. All were made possible through voters' support.

Roughly half of the near-term coming destinations are in Washington County, where a growing population will mean more and more demand for high-quality recreation.

To get a glimpse of what that means for residents and visitors to Washington County, Brennan-Hunter invited Metro parks planners to share progress on several projects on the region's west side.

Through partnerships with nonprofits like the Audubon Society of Portland and Ducks Unlimited and extensive public involvement, Metro has crafted a design that will enhance access to key birding viewpoints but limit the extent of major improvements so that farming is not affected.

"The intent is to create a light touch on the landscape," Perove said.

Two trails would help disperse visitors while blinds would help visitors watch birds without disturbing them. The plan would also restore an old barn on the site. The new facilities could open as early as 2017.

A new canoe and kayak launch on the Tualatin River is coming to Farmington Natural Area, where Farmington and River roads intersect south of Hillsboro.

The launch, which could be open as early as fall 2016, will be important to fulfilling a long-held vision of frequent access points to the 83-mile Tualatin River, which drains a watershed that’s home to a half-million people, said Rod Wojtanik, interim parks and natural areas planning manager.

Access to the river means more than a fun kayak, canoe or fishing trip, Wojtanik said. It means instilling a sense of pride in the river and commitment to its health.

The site was selected for a boat launch several years ago, but money from the 2013 levy is now making the project a reality. The project has also been supported by a grant from Oregon Parks and Recreation Department and is a partnership with Tualatin Riverkeepers.

Wojtanik also gave Metro councilors an update on a unique natural area in the middle of a rapidly urbanizing part of Hillsboro.

The 40-acre Orenco Woods Nature Park, near the growing Orenco Station neighborhood, was once home to the founder of the Oregon Nursery Company and later became a golf course. It was nearly developed for 250 homes before it was purchased by Metro in partnership with Hillsboro and The Trust for Public Land in 2011.

Metro contributed $2 million to the purchase with money from the 2006 natural areas bond measure.

Hillsboro's parks and recreation staff led the planning effort for the park, Wojtanik said, bringing community members to the table to share their visions for how the space could be used. A master plan was approved by the Metro Council in November 2013.

Earlier this year, planners completed designs that dedicate much of the rolling site to passive trails crossing an oak savanna, wetlands and riparian forest along Rock Creek. The park will also feature a nature play area and re-use of the historic McDonald House. Construction is slated to begin in 2016.

"Soon residents of the region will be able to explore this area, but more importantly thousands of residents of Orenco, Beaverton and Orenco Station will call this their nearby nature," Wojtanik said.

Finally, Metro senior natural resources scientist Elaine Stewart told the Metro Council about successes restoring wetlands at Maroon Ponds, a Metro-owned property just outside Forest Grove. The project is one of scores underway around the region to improve water quality and wildlife habitat with voter-approved money.

Last summer and fall, Metro and Clean Water Services partnered to successfully remove dirt and garbage from an artificial dam and to reconnect a historic wetland with natural springs. Through the winter and spring, crews planted a variety of native vegetation and thinned Douglas fir forests to create a healthier forest environment, and laid new groundcover in the former pond's muddy bed.

Metro is also furthering the region's equity goals through its parks and natural areas program, Brennan-Hunter said. Several programs and grants have been launched in recent years to connect underserved communities to nature. Indeed, many of the Nature in Neighborhoods grants approved by the Metro Council on Thursday directly serve communities like youth of color and low-income residents that have long found nature harder to access.

Metro also has a goal to contract with as many minority- and women-owned small businesses as possible. Recently, such businesses won 17 of 30 new contracts for restoration work, comprising about half of the money Metro's parks and nature spent on contractors.

Brennan-Hunter also highlighted a variety of programs to improve access to nature for more people, including partnering with community-based organizations to make sure Metro sites are welcoming to diverse communities and developing strategies to broaden outreach in parks and natural areas planning.

Throughout the day, Metro staff emphasized the impact of voter-approved funding on Metro's ability to provide high-quality parks and natural areas to a growing region.

Since 1995, 71 parks have either opened or are in the process of opening thanks in large part to voter investments, Brennan-Hunter said. There are now more than 17,000 acres protected in Metro's parks and nature system, ranging from rare oak prairies to old-growth forests, historic wetlands and places for active recreation like Blue Lake Regional Park and Chinook Landing boat launch.

Later this year, the Metro Council will consider a draft plan for that whole system, aiming to improve visitors' experience, prioritize investments and develop a system-wide identity and plan for the future.

"All of this work is really connected and builds on a common goal: to build a world-class regional parks and nature system," Brennan-Hunter told the Metro Council.

Find a Metro park or natural area near you