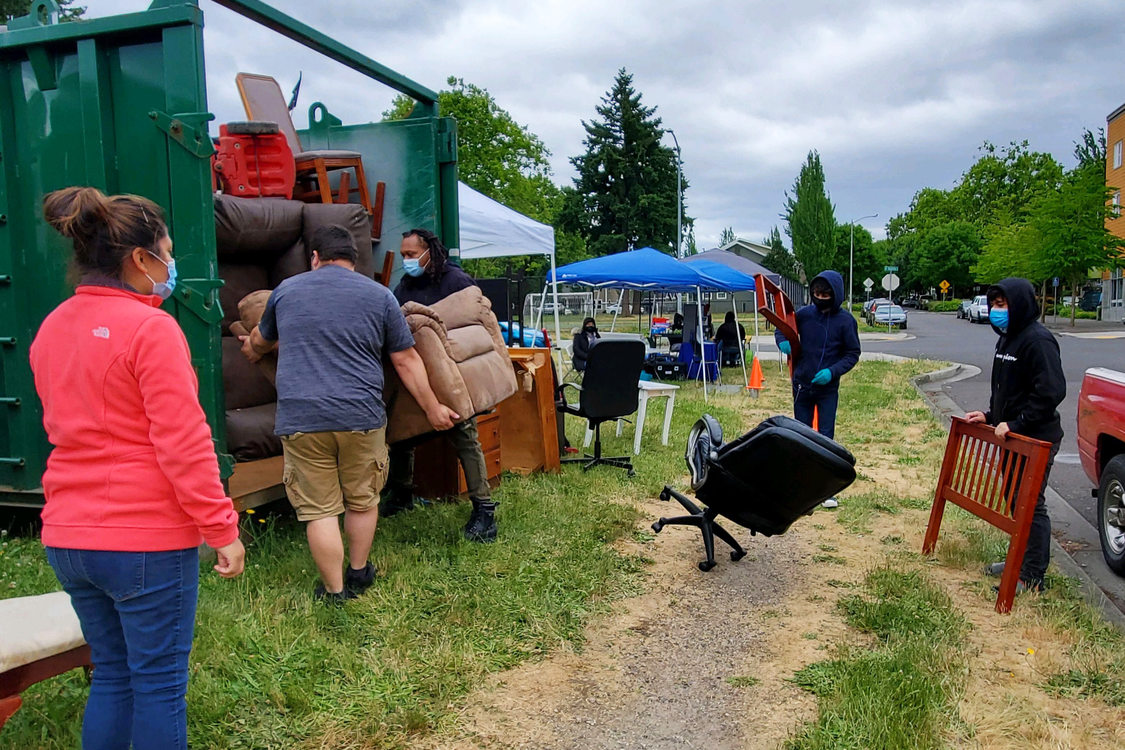 Bulky waste collection events, like this one in North Portland, help people get rid of large items that are burdensome to dispose of. 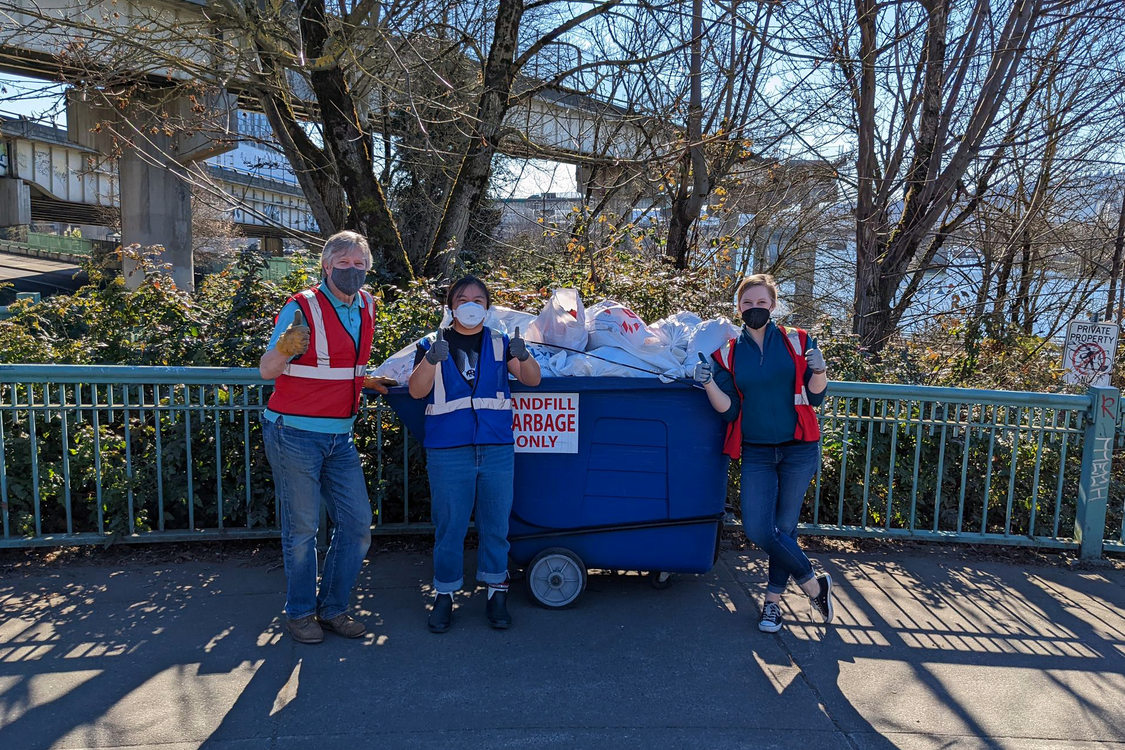 Lloyd Eco District led two cleanup efforts out of Peace Memorial Park in Northeast Portland. Volunteers give the thumbs up after a successful trash pickup event. 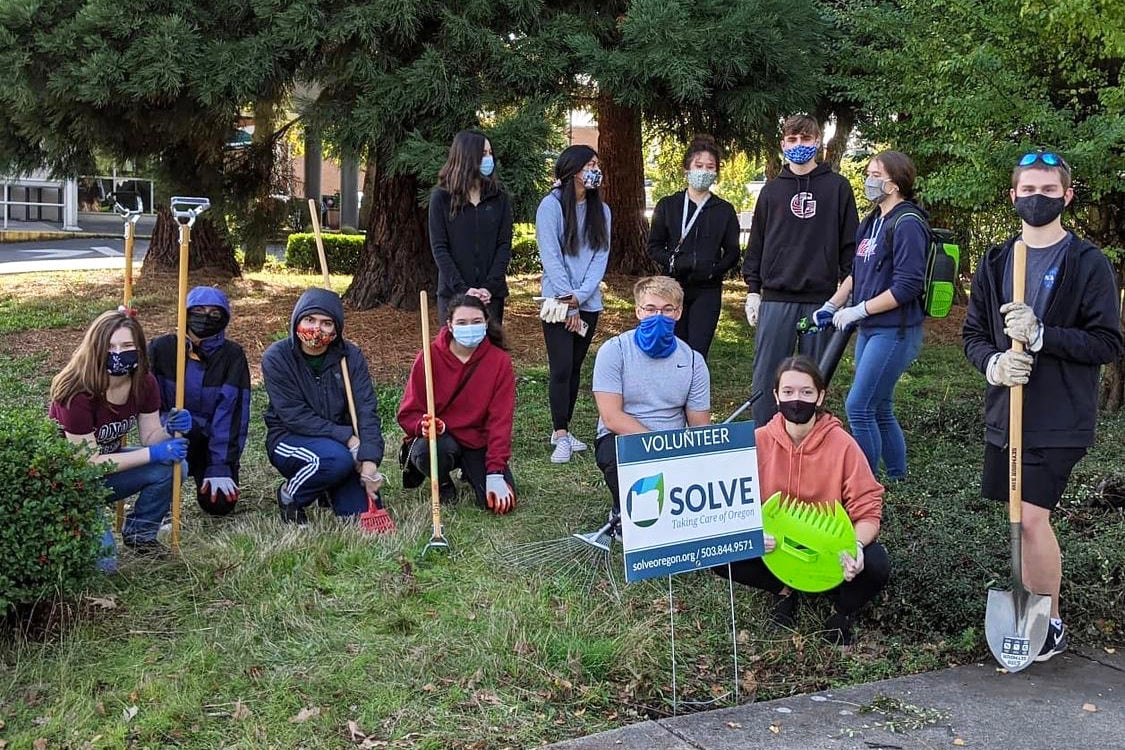 Hillsboro Downtown Partnership led a cleanup of the Latine business district in the winter of 2021. 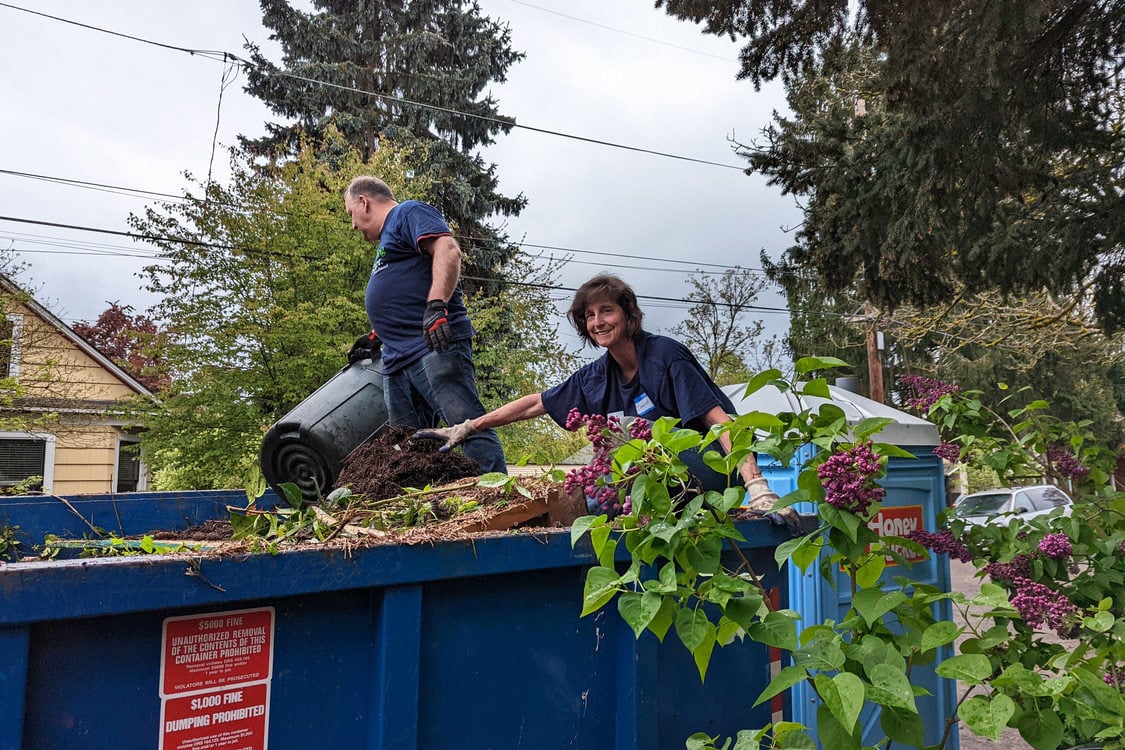 On Rebuilding Day, the nonprofit Rebuilding Together gathered hundreds of volunteers to help rehab and revitalize 40 homes, helping out people with low incomes, people with disabilities and older people. Support from the Regional Refresh Fund helped fund disposal costs for the event.

People living without housing work in shifts to pick up tons of trash from city streets, and near freeway entrances. Volunteers in the Lloyd District pick up litter from parks and sidewalks. Soon, volunteers will pull garbage from a seven-mile stretch of Johnson Creek.

All these clean-up efforts were sponsored by Metro’s Regional Refresh Fund. During the pandemic greater Portland experienced a lot of illegal dumping, a lot of litter and a lot of graffiti, says Cayla Pruett, sponsorships program coordinator at Metro.

“We are looking to fund immediate cleanup needs across the region,” Pruett says. The aim is to get sponsorships of up to $5,000 out to organizations doing cleanup projects in underserved or environmentally sensitive areas such as parks or wetlands.

Equity is a priority for this fund, Pruett says. The funds go to projects in places with higher numbers of people of color, people with limited English language proficiency, or people whose incomes are equal to or less than 200% of the Federal Poverty Level.

If an applicant’s project is not serving an environmentally sensitive or equity-focused area (check the map here), they’ll need to show that it benefits an underserved group.

“We try not to put a lot of restrictions on how organizations can use the funds,” says Pruett, “as long as they are used to directly support the cleanup effort.” Nonprofits, public agencies, schools and business district associations can apply. Metro doesn’t sponsor individuals, but says Pruett, if you have a plan and volunteers, you can apply through a fiscal sponsor: a nonprofit willing to work with you.

Organizations can apply for more than one sponsorship if projects are in separate locations. For example, the City of Gresham was approved for funding to organize bulky waste collection events at three low-income apartment complexes that serve distinct populations.

The online application form shouldn’t take more than 15 minutes to fill out, says Pruett. “And the review committee usually turns around applications within two weeks.” She is happy to brainstorm with applicants to strengthen applications. In general, most expenses that support a cleanup activity will be approved.

Recently the program has expanded to fund some rehabilitation efforts as part of cleanups. So, if volunteers clean up litter in an area and want to use some of the funds to purchase and plant shrubbery to deter future dumping, they could do so.

The fund has partnered with MetroPaint, so applicants can tick a box at the end of the application if they would like free paint to, say, cover graffiti.

Metro will not pay for the purchase of large assets such as a trailer for hauling stuff on a regular basis or sanitation equipment such as portapotties.

“We want to give funds away, we want people applying, we want people spreading the word,” says Pruett, “We want people getting creative to make sure we are cleaning up the region and serving our underserved populations.”

People throughout the region are able to clean up their communities with help from Metro’s new Regional Refresh Fund.