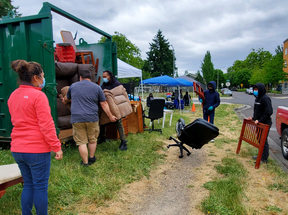 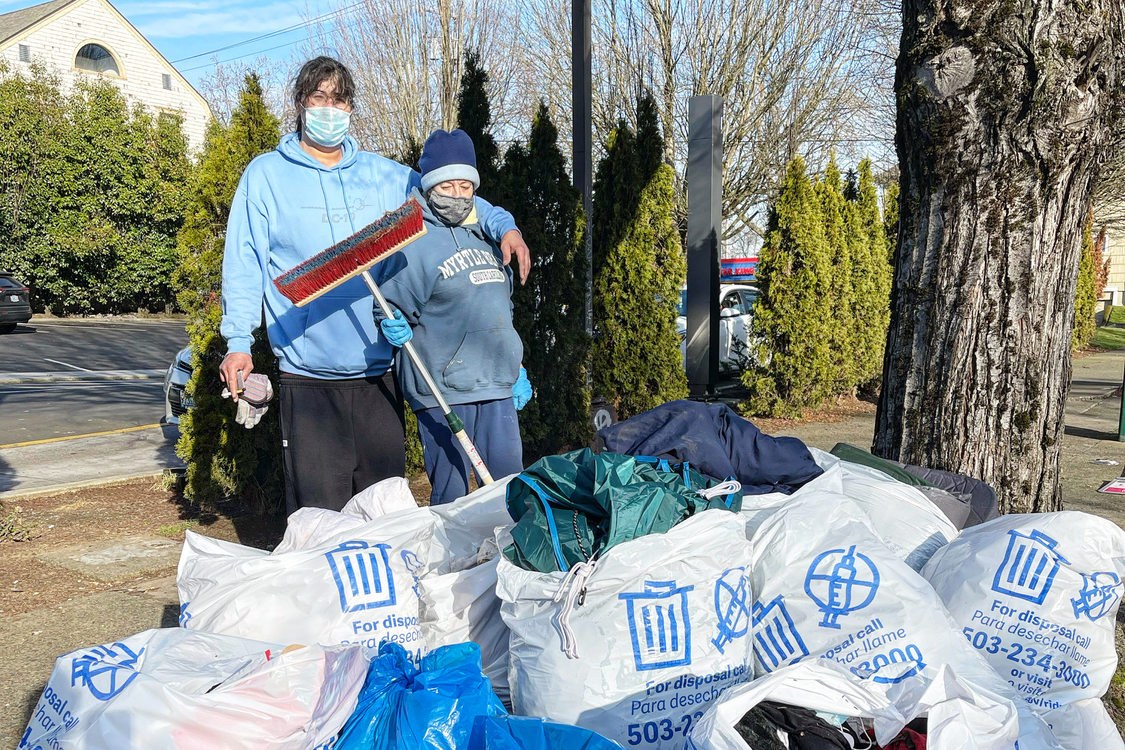 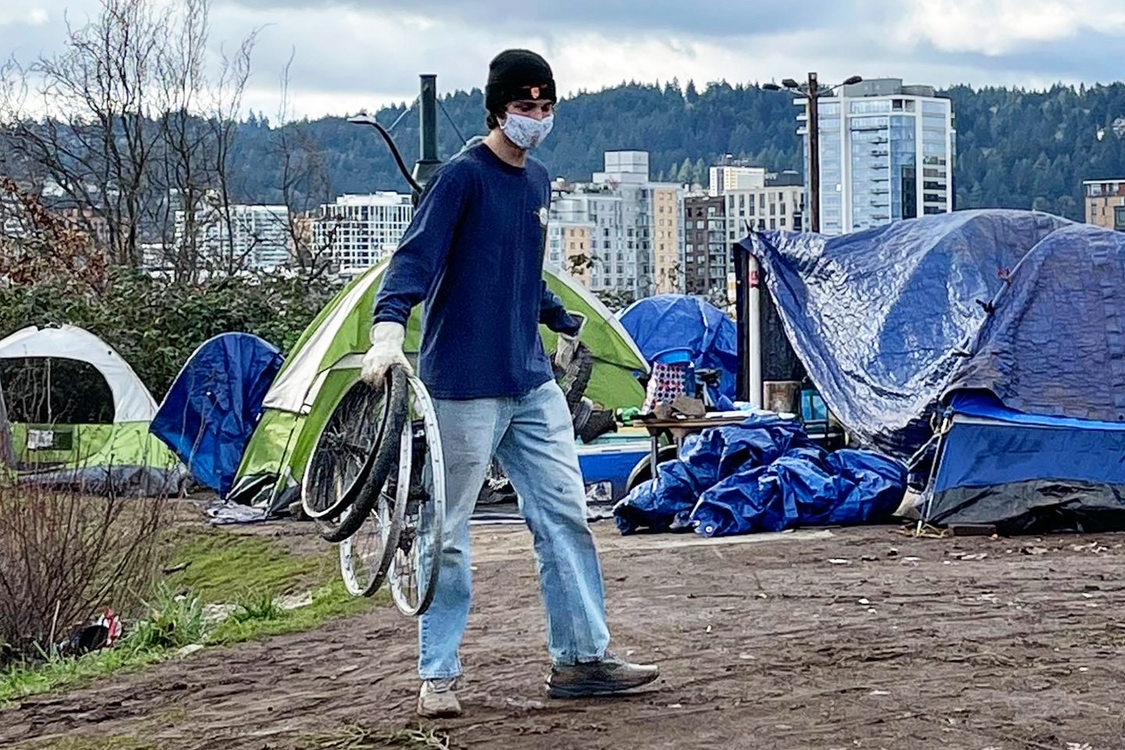 A neighbor experiencing homelessness carries bicycle rims and tires at the Larabee cleanup between Broadway and Interstate. Three tons of trash were collected at the Larrabee cleanup project. 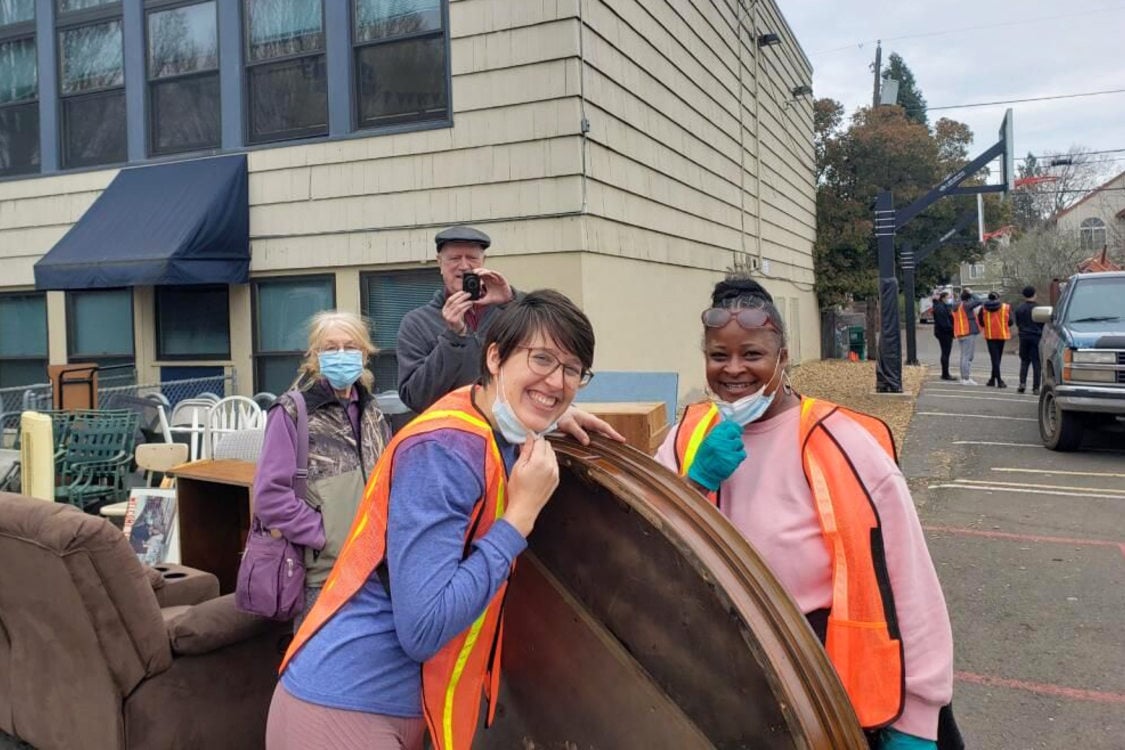 The North by Northeast Community Health Center held a collection event in early March. Hundreds of people showed up to get rid of tons of furniture, scrap metal, electronics, tires and mattresses.

Volunteers at the Woodlawn Neighborhood Association cleanup event pose behind a Santa statue bound for the landfill. The event helped people get rid of bulky waste that is difficult to throw away.

Flexible, low-barrier funding is available right now for community-led projects to pick up litter, get rid of graffiti, safely dispose of items that can’t go in curbside bins, and clear trash from fragile green spaces.

Metro’s new Regional Refresh Fund offers sponsorships for these and other cleanup efforts in underserved communities or environmentally sensitive areas.

Here are three recent examples of how people have used the money.

Portland chef and cookbook author Jenn Louis has been cooking and distributing food to neighbors experiencing homelessness in Northeast Portland since November 2020.

On Tuesdays she leads a convoy of three or four cars driven by volunteers, packed with clothes, toiletries, tents, tarps, and home-cooked meals to deliver to people who live on the streets in North and Northeast Portland.

A project to clean up heavily trashed areas near camps and freeways grew out of the strong relationships she has built with houseless neighbors on these visits. She worked with a nonprofit fiscal sponsor to apply for and receive funding for what she calls a “homeless relief and employment project.”

She has used the Regional Refresh funds to pay people who live outside $20 an hour to clean up garbage, to hire an assistant to run the cleanups, and to transport workers to cleanup sites.

Some pieces of trash are too dangerous to remove without the proper equipment and training. Metro's RID patrol can remove hard to reach trash like this dumpsite at the bottom of a hill.

“My goal was to make it so people didn’t have to worry about their basic needs being taken care of. I believe that helps relieve a tiny bit of their day-to-day trauma,” Louis says.

Folks work four-hour shifts with breaks every hour and a home-cooked lunch. “In the first week, we collected 10 tons of garbage off the streets,” she says. Since then, she has received additional funding to clean up other sites.

Rhonda who lives in a tent near an electricity substation, was part of a team that cleared trash from a steep embankment. She makes it clear that the area was no longer occupied. “We don’t mess with anyone’s stuff.” They hauled out everything except an illegally dumped queen-sized box spring. “I’m thinking we just need a grappling hook and we can pull that sucker out of there,” she says.

“Trash and illegal dumping are such an issue right now, and the people cleaning up are not the ones with the advantages,” says Louis. “They really see it as something they are doing for Portland.”

Harnessing the power of community partnerships

“We saw it as a community-building opportunity,” says Rick Reynolds, an active member of the Woodlawn Neighborhood Association. The neighborhood association worked with Woodlawn Elementary School and many other partners to organize the event. It was, says Reynolds “a way to support local businesses, an easy and low-cost or free way for neighbors to get rid of trash, and to work together to beautify the neighborhood.”

Some of the food and drinks donated for the celebration, including sweet potato and pumpkin breads and coffee, came from local, BIPOC-owned businesses. Trash for Peace worked with kids to turn trash into art.

“The application process was so easy,” says Reynolds. And the event was a resounding success. “Forty volunteers and other partners worked together to help about 200 households dispose of trash, recycle just about everything that can be recycled in our area, and reuse a lot of great stuff.”

Access to safe and low-cost ways to get rid of bulky waste and things that should not go into the trash bin – old appliances, couches, mattresses, TVs – is difficult for many people.

“We heard a lot about bulky waste but hadn’t thought about doing an event, because it didn’t seem to align with our mission,” says Sharetta Butcher, community care director at Portland’s North by Northeast Community Health Center. “But then we learned we could include things like sharps and old medications as well as used furniture and mattresses.”

The clinic offers culturally specific primary care and health education to the Black community. It was founded in 2006 to serve survivors from Hurricane Katrina as well as longtime residents of the neighborhood with no access to health care.

Before the event, “we had a meeting on how to involve other recycling organizations, so we weren’t just taking everything to the landfill,” says Butcher. The clinic also partnered with a neighbor, St. Andrew’s Church, who had experience running bulky waste events. “If we hadn’t talked and planned with them and Metro and the City, we would have been up a creek.”

The clinic hired two moving companies from the community to do home pickups.

“Many of our patients, especially the elderly, don’t have a truck to haul things to the dump or the financial means to pay for disposal,” says Butcher.

“People told us afterwards that they’d had things like an old refrigerator on the porch for years, and they would try to have it closed the best way they could, but they were nervous that kids might play with it. They were so grateful to have stuff like that hauled away.”

On the day of the event in early March, hundreds of people showed up to get rid of tons of furniture, scrap metal, e-waste, tires, Styrofoam and mattresses, much of it recyclable. The clinic also took in and safely disposed of:

“We’re still getting calls about when we might do it again,” says Butcher.