As work continues at North Portland’s Willamette Cove, Metro councilors were briefed on a plan to collaborate with community members on decisions around future recreational opportunities and trails at the site.

At a work session on July 27, Metro Council heard from staff members about the community engagement plan for Willamette Cove, which aims to give decision-making power to people who have been historically excluded, such as communities of color, immigrants, people with disabilities and other systematically oppressed communities. The plan is informed by Metro’s Racial Equity Framework, which is focused on removing barriers for people of color and improving equity outcomes for these communities by improving how Metro works internally and with partners around the Portland region.

At Tuesday’s work session, Metro staff reported on the history of Willamette Cove, the work that’s happening currently with stakeholder groups and the criteria for meaningful community engagement. After a question and answer period, Metro Council voiced support for the plan, and a desire to hear more after a decision is made on the additional cleanup options at the site later this year.

“I don’t think there’s any way we get where we’re trying to go without letting community lead in the process,” said Councilor Christine Lewis, who presided over the work session.

All five councilors present at the meeting shared their thoughts on the community engagement plan, emphasizing the importance of Metro’s commitment to racial equity and a desire to involve community members in the decision-making process, as well as continue Metro’s ongoing work with stakeholder groups.

“We’ve had time to reflect and engage with folks on this project,” said Councilor Juan Carlos González. “This should really allow us to go that extra mile.”

Because of the complicated nature of the Willamette Cove site, Metro Council needs more information before directing staff to begin the community engagement process to make decisions about future recreational opportunities there. The community engagement possibilities will be shaped in part by future decisions about the upland cleanup and the in-water work in the lower portion of the site.

In the meantime, Metro continues to engage with community members, keep them informed of the process and listen to any questions or concerns they may have regarding Willamette Cove.

In addition to a plan for community engagement at Willamette Cove, Metro will work with tribal governments and stakeholder groups to identify community priorities for passive recreational opportunities and trails in line with the protection and restoration of natural resources at Willamette Cove. Currently, Metro staff members are evaluating a contingency cleanup remedy at Willamette Cove, as directed by Metro Council in April of this year, part of the DEQ-mandated cleanup plan from March 2021.

Next steps in preparation for cleanup action include a final, large-scale soil sample collection effort to confirm the depth of excavation necessary to achieve cleanup goals, anticipated to be completed by late 2022. DEQ will coordinate with Metro and the Port of Portland to conduct the cleanup. DEQ will also use this data to develop final plans for soil containment and off-site disposal.

Timing for planning and completing the cleanup of the upland portion of Willamette Cove is also tied to the Portland Harbor in-water cleanup work, led by the U.S. Environmental Protection Agency.

Investigation and cleanup of Willamette Cove are overseen by two agencies: the Oregon Department of Environmental Quality and the federal Environmental Protection Agency. DEQ has oversight of the upland portion, from the top of the riverbank northward to the Union Pacific Railroad tracks. The Environmental Protection Agency has oversight of the in-water portion, from the top of the riverbank and into the river. Metro and the Port of Portland have worked with DEQ under a voluntary cleanup agreement for the past 20 years.

Metro purchased the Willamette Cove property in the St. Johns and Cathedral Park neighborhoods in 1996 using money from the 1995 natural areas bond measure. Plans to extend the North Portland Greenway Trail were stalled when high levels of contamination were found throughout the site in the late 1990s. The focus, instead, shifted to cleanup efforts.

Metro has worked with partners over the years on several cleanup efforts, including in summer 2004 when a cap was constructed in a portion of Willamette Cove in response to contamination from a neighboring site. In 2008, soils with high metal concentrations were removed from the central portion of the site.

Oregon Health Authority recommended the site be closed for public health and safety since 2013 because of contamination and physical hazards.

In 2015 and 2016, soils with the highest levels of contamination were removed from much of the upland areas and replanted with native vegetation. But contamination still remains throughout the site and in the river that pose risks to human health and the environment. 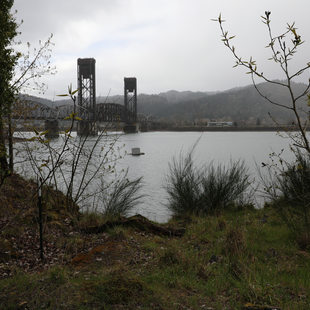