Metro strives to create accessible outdoor spaces for diverse visitors and bodies. Will Cortez, accessibility project manager for the 2019 parks and nature bond, says the agency’s philosophy on accessibility has evolved over the years, going beyond basic compliance with the Americans with Disabilities Act (ADA) and Architectural Barriers Act (ABA) standards. He points to picnic tables as an example.

“We have to take a step back and throw that out the window,” Cortez added. “We have to realize that there’s a lot of stigma to isolating folks and saying, ’That’s where you have to sit,’ or, ‘You get the end of the table’ and taking away choice for them. So then you start creating site fixtures that allow freedom of choice. Instead of isolating them off in a corner, make sure that all the picnic tables have clearance underneath them so they can choose any one of them, and then also make cutouts that are in the middle of the bench so finally someone in a wheelchair can sit in between everyone. That’s the shift in thinking we’re making.”

Rod Wojtanik, Metro’s parks and nature planning manager, shares a focus on curating natural spaces which include voices from folks of all abilities in the planning process. “We need to be surrounding ourselves with diverse voices, rather than making decisions about natural spaces from behind our desks.”

That’s part of why Metro partnered with The Unpavement, an organization dedicated to reviewing rides for adaptive bikers, to test its trails at Newell Creek Canyon and Chehalem Ridge nature parks.

The Unpavement helps adaptive cyclists visit trails with confidence. “A lot of folks stay off the trails because they don’t know what to expect,” explained Cortez. “This gives them the freedom to make an informed decision.” Cortez said that both parks’ trails received high marks from the organization – and that the testing revealed a problem with the gate entrance at Newell Creek Canyon Nature Park, alerting staff to start working on a solution.

Wojtanik says park planning requires balancing accessibility needs with environmental impact. For instance, making a bike trail too narrow prevents adaptive mountain bikes from being able to ride on it – but making it too wide will increase erosion and other environmental concerns. “Ultimately we want to invite folks into natural spaces where there may be some natural barriers, but an accessible experience is available to all,” he says. 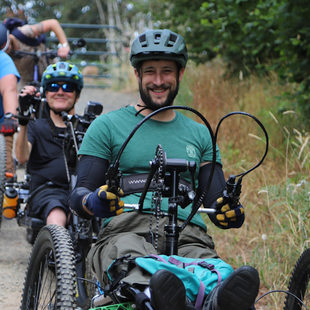