The Metro Code is a set of laws that govern activity in the Metro District. The code is divided into eleven titles, and each title is further divided into chapters and sections. Administrative rules further implement certain code chapters. 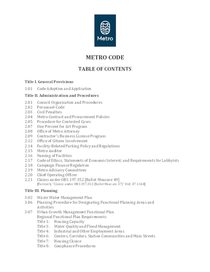 The Metro Council adopts or amends code sections by ordinance. Some sections have been repealed or otherwise deleted, as noted in the links below. The code is periodically revised as new ordinances are adopted. As amendments become effective, code chapters or parts of chapters are re-published.

In addition to the code and administrative rules, Metro’s actions are governed by a home-rule charter that is similar to a constitution.