A strategy for providing better transit service in the greater Portland region. 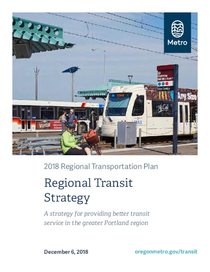 The greater Portland region is growing as more people are attracted to the quality of life around our region. Our robust transit system plays a critical role in the effectiveness of our transportation system and also serves as a key component to the high quality of living residents of our region experience.

Significant future growth is anticipated for our region and our transit service must expand to keep pace with this expected growth. The Regional Transit Strategy highlights the region’s plans for meeting our future transit goals and will help implement the 2018 Regional Transportation Plan.

The Regional Transit Strategy was produced with input from various workgroups, community feedback and regional partnerships. This input helped develop a regional shared vision to make transit more frequent, convenient, accessible and affordable for everyone and that includes a focus on:

It had been 26 years since the 1982 Light Rail System Plan. In the interim, 64 miles of light rail, commuter rail and streetcar had been built; 26 more miles were in the planning stages.

This Regional High Capacity Transit System Plan is part of the 2035 Regional Transportation Plan adopted by the Metro Council in 2010.

What is high capacity transit?

High capacity transit is public transit that has an exclusive right of way, a non-exclusive right of way or a combination of both. Vehicles make fewer stops, travel at higher speeds, have more frequent service and carry more people than local service transit such as typical bus lines. It includes:

The plan was developed by Metro and:

Another aspect of the plan is its system expansion policy framework – a process agreed to by Metro and local jurisdictions to advance high capacity transit projects to regional priority. The framework: