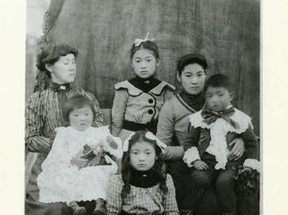 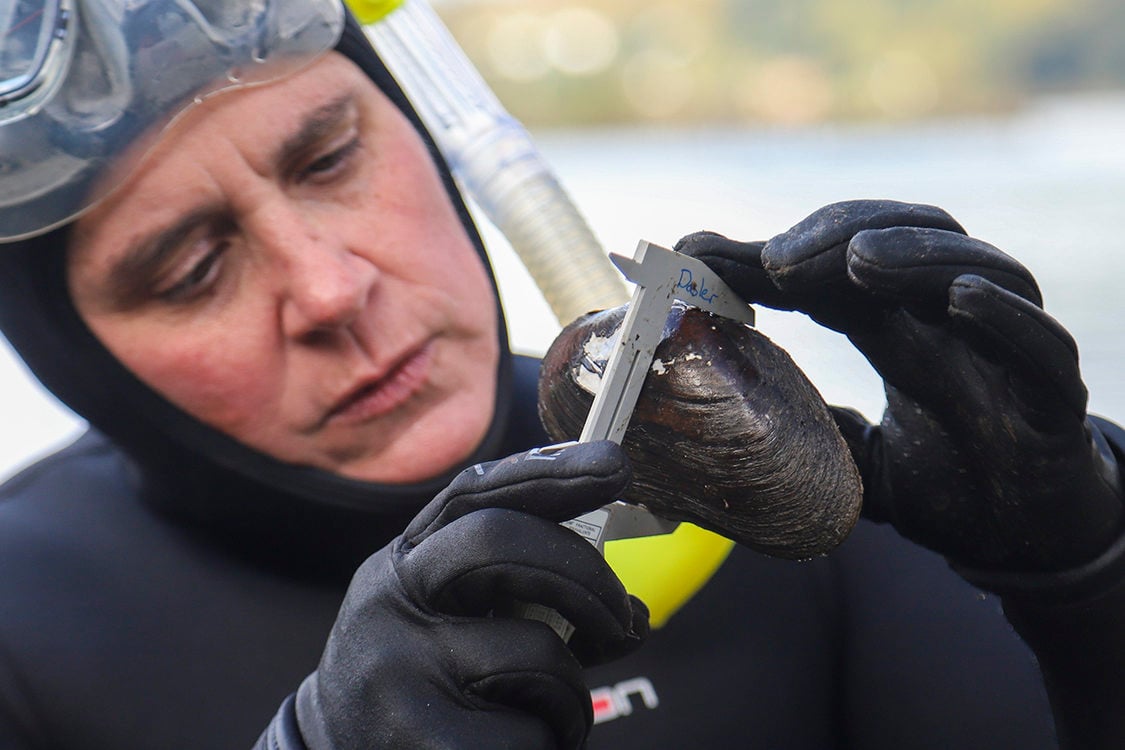 Celeste Mazzacano, an invertebrate scientist, measures a freshwater mussel she transplanted from Chinook Landing Marine Park to a stretch of the Columbia Slough in Portland.

Celeste Mazzacano, an invertebrate scientist, measures a freshwater mussel she transplanted from Chinook Landing Marine Park to a slough on the Columbia River in Fairview. 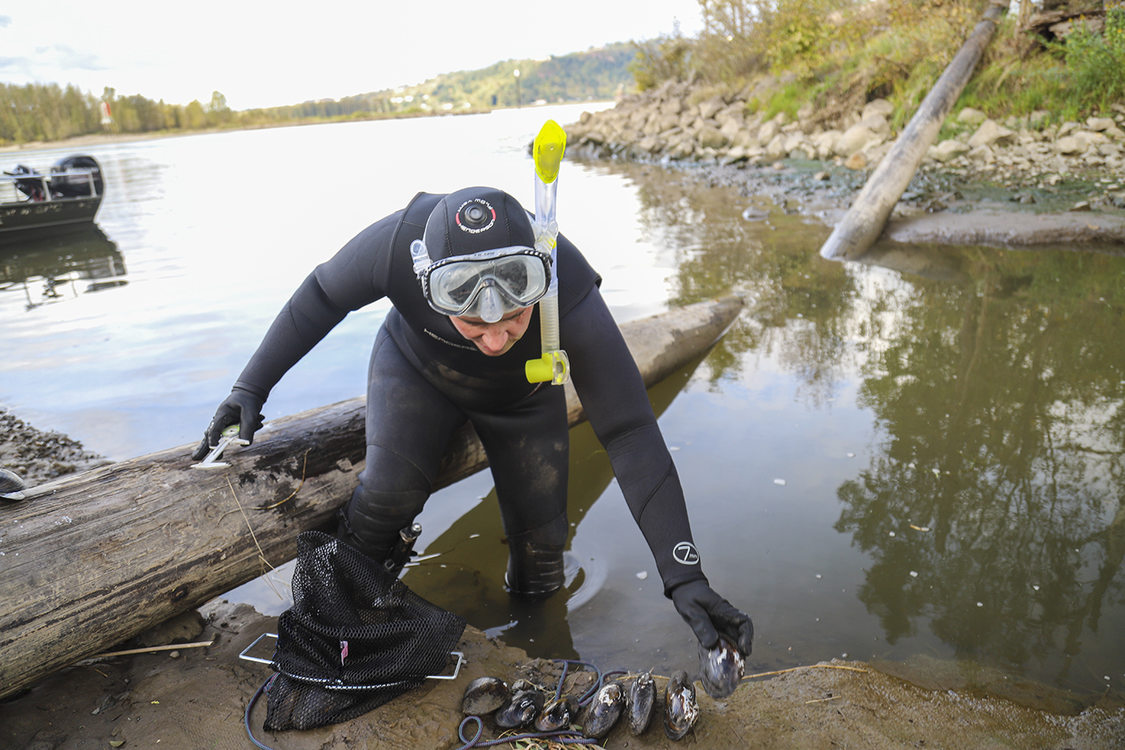 Celeste Mazzacano, an invertebrate scientist, transplants mussels from Chinook Landing Marine Park to a stretch of the Columbia Slough in Portland.

Celeste Mazzacano, an invertebrate scientist, transplants mussels from Chinook Landing Marine Park to a slough on the Columbia River in Fairview. 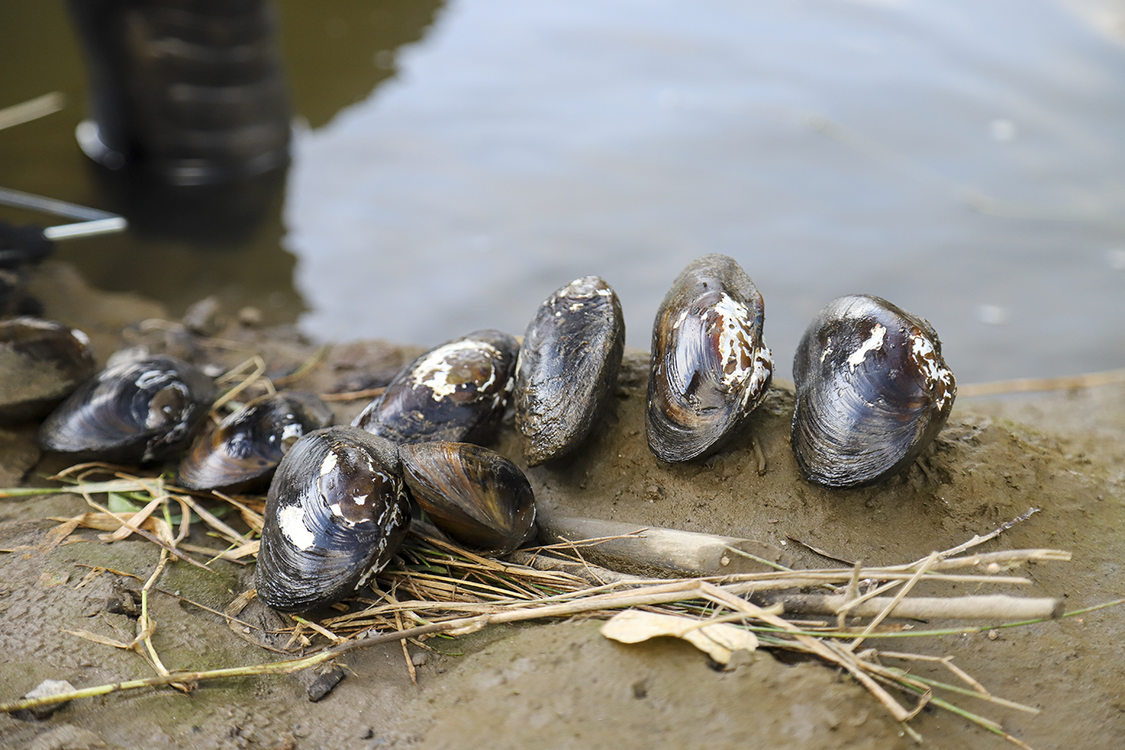 Metro’s scientists work on more than habitat restoration. Sometimes we help conserve important wildlife and habitats in surprising locations. One such place is Chinook Landing Marine Park, a boat launch on the Columbia River that is one of Oregon’s busiest.

The park’s four docks sit in a bay carved out of the shore in the 1990s. The bay has been filling slowly with silt, and the muddy bottom could provide good habitat for freshwater mussels. Metro wanted to dredge the channel and boat basin for boater safety, but dredging suctions up the mud. That is deadly for mussels. So I worked with our construction team to see if mussels were present and, if they were, to stage a rescue mission.

Freshwater mussels are some of the most endangered animals in North America. We have found two clades (groups of closely related species) at Smith and Bybee Wetlands and in the Columbia Slough, so we thought they could be present at Chinook Landing, too.

Mussels are filter feeders, taking in water and eating tiny plants and animals before releasing the filtered water back into rivers and lakes. This filtering process is critically important for clear and clean water.

We know freshwater mussels are in trouble, but we know very little about their populations or where they live in our region. Easily overlooked, mussels bury themselves in river and lake bottoms and resemble rocks to the untrained eye. Once settled in, they may move very little for the rest of their lives, which can be more than 100 years for some species. Part of good stewardship is documenting what we have and taking care of it.

Mussels are sensitive to pollution because they ingest pollutants while filtering water for food. They also depend on fish for part of their life cycle. During reproduction, mussels cast their young into the water. These larvae, called glochidia, resemble tiny clams and they hitch rides on fish before dropping to the bottom where they grow and mature. Not just any fish will do: some mussels will use only one species to carry their young. Many mussel species have incredible appendages that look like prey. When a fish bites at the lure, the mussel releases a cloud of glochidia into its mouth and the tiny mussels attach to the fish's gills temporarily. If the right species of fish is no longer available, the mussels cannot complete their reproductive cycles.

Mussels are important beyond being water quality specialists. They have cultural importance as a first food to many different Indigenous peoples across North America, and in the Columbia River Basin tribes are working to restore mussels within their reservations and in lands that were ceded to the United States. Mussels are important food for birds, otters, raccoons and other wildlife, too.

In fall 2019, Metro hired invertebrate specialist Celeste Mazzacano to dive the boat basin and search for mussels. Within an hour, Celeste brought one to the surface to show us. Having documented the presence of mussels, we shifted our work to planning for their safety during the dredging work set for 2020.

We needed a plan to capture and move the mussels out of the area before dredging killed them. Although they do not move quickly, mussels can travel from one area to another. That meant we could not catch and move them in fall 2019 but would need to do the work the following year, right before construction.

The rescue work took two days. Celeste and divers from Otak crisscrossed the boat basin methodically to cover the area. The silt stirred easily, clouding the water and making visibility as little as a few inches. We strung a rope across the boat basin, and the divers held the rope with one hand while gently probing the bottom for mussels. Divers relayed mussels to staff on shore who placed them in a mesh bag in the water to avoid stressing them.

We recovered a total of 23 native mussels. We moved them to a nearby slough with good habitat, where they were gently placed in the muddy bottom. All of the mussels were adults, and this suggests that the very fine silts in the boat basin were not ideal habitat for young mussels. The adults probably moved into the basin shortly after the previous dredging project, and the fine silts accumulating on the bottom made it less hospitable over the years. The dredging may remove the finest silts and leave better habitat for mussels when the work is completed.

Mussels grow slowly, so it will be several years before we can detect whether they move into the basin. It will be important to search again before the next round of dredging. We hope that searching for mussels and protecting them becomes standard practice for construction projects like these across our region.

Creating a map of nearly every oak in greater Portland took hundreds of hours. The map will influence restoration projects for years to come.