At a work session yesterday, Metro Council pulled the plug on any further exploration into whether a sizeable portion of garbage from greater Portland should be burned to make energy.

“It’s the obvious choice to set this aside,” said Councilor Kathryn Harrington, echoing the roundtable of councilor comments that preceded her own.

The session ended a five-year conversation about the possibility of burning more of Portland’s trash for energy.

Metro manages the garbage and recycling system for greater Portland, including most of Clackamas, Multnomah and Washington counties. The Portland region generates more than a million tons of garbage every year – the stuff left after waste reduction efforts like composting and recycling. Metro has been gearing up for potential changes in how that garbage is handled and where it goes after 2019. That’s when longstanding contracts in place with Waste Management, a large national garbage business operating in greater Portland, expire. These agreements have required that 90 percent of the greater Portland area’s wet garbage be sent to one of its landfills. Wet garbage does not include what’s known as dry waste, such as construction waste.

Many post-2019 options have been on the table. In the last two years, that list has been continually narrowed based on a variety of criteria, including public and environmental health, good use of the public’s money, and proven viability. In January 2016, Metro Council directed staff to explore two options for putting more of Portland’s garbage to use. One, known as “advanced material recovery,” involves sorting garbage after it’s collected to pull out more recycling. The other is what’s known as “waste-to-energy,” more specifically burning garbage to create electricity.

Metro staff conducted a range of research to explore whether waste-to-energy might be a viable option given that an existing facility in Marion County just north of Salem is already burning enough trash every day to power 8,000 homes. The possibility of expanding that facility, operated by Covanta, and sending up to 200,000 tons of Portland’s garbage there each year, became the sole focus of research.

Even though the Covanta option was the cheapest one for waste-to-energy, it would still be considerably more expensive than sending garbage to landfills: $60 a ton versus $25 a ton. But Metro Council wanted to know if there was enough other value, such as environmental benefit, reduction of climate or human health impacts, or other economic or social benefits that would balance out the higher financial cost.

To answer this question, Metro worked with a community advisory panel of health, environmental and environmental justice leaders and advocates to conduct a health impact assessment. Using the World Health Organization’s definition of health as the complete physical, mental and social well-being of a person, Metro solid waste engineer Rob Smoot explained that a health impact assessment looks at a broader, more holistic range of factors affecting human health than other types of assessments. Findings from the 211-page assessment were a focus of the discussion at Tuesday’s work session. (Pro-tip: Read the four-page staff report.)

Health and climate impacts are inconclusive

While the assessment found that, based on existing studies and current regulations, sending additional waste to Covanta presented only negligible health risks, the advisory panel and Metro staff added some context that made this finding less conclusive in the end. Smoot said the advisory panel was concerned that current air quality regulations may not accurately reflect how much people’s health is protected. This thinking echoed long-voiced concerns from Oregon Physicians for Social Responsibility about whether we know enough about the type and quantity of pollutants that come from such facilities.

Councilors offered hat tips to members of the public who have been tracking health impact questions related to this technology. Some of them attended Tuesday’s session.

Climate impacts of waste-to-energy also proved ambiguous. Staffers said it was not possible to compare greenhouse gas emissions between the landfill option and the waste-to-energy option because there is not agreement on how to measure them.

Add to this the fact that equity and environmental justice issues could not be fully addressed within the scope of this assessment, and the fact that Oregon has no shortage of landfill space providing pressure for other options, said Smoot, and the benefits of waste-to-energy do not outweigh the added costs.

Councilors express disappointment, clarity and an eye to the future

Smoot emphasized that this was not a one-size-fits-all decision. “This is just the recommendation for this region at this time,” Smoot said.

“This study is very disappointing,” said Councilor Carlotta Collette, who described herself as a proponent of waste-to-energy. But, she added, “I really get that we don’t want to take the risk.”

It was a sentiment shared by many of the councilors. “Nothing beats knowing more,” said Councilor Craig Dirksen. “When you weigh all the considerations, it doesn’t make sense for us.”

Dirksen, Collette and Councilor Shirley Craddick all expressed that while now might not be the time for waste-to-energy in this region, it would be important to continue to keep an open mind. The decision could change in the future, said Dirksen, “if the formula changes.”

Councilor Sam Chase and Councilor Bob Stacey agreed. But Stacey added that there was no longer urgency for this question. For now, he said, “We should abandon the inquiry.”

Other options for garbage still in play

While exploring the option of waste-to-energy, Metro has also been focused on other ways to use garbage as a resource, including getting more food scraps out the garbage. Food makes up nearly a fifth of all garbage from greater Portland going to landfills right now. Businesses generate more than half of it. Last fall, Metro Council directed staff to explore policies that would require some food-generating businesses to separate those food scraps.

Food is also seen as an early domino that can facilitate other better ways to use more of what the region throws away. Less food in the garbage means drier garbage that’s easier to sort for recyclables. Advanced material recovery, as it’s called, and waste-to-energy were the two options Metro directed staff to further explore more than 18 months ago.

Now only one is still on the table. 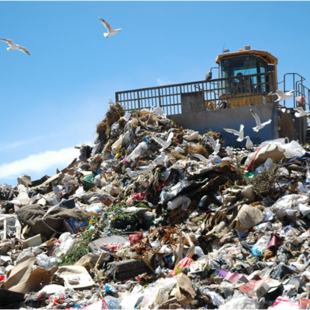 Greater Portland garbage will no longer go to growing landfills