In Portland’s Central Eastside District, among the venerable old warehouses and workshops, a new six-story building is being constructed using the very old elements of wood and brick.

This is not just a quaint Portland anachronism, however. Clay Creative, as developers Killian Pacific are calling the future industrial office and maker space, is being constructed using a modern take on a historical process called “mass timber,” and they’re doing it for reasons that are gaining traction in today’s fast-growing and more sustainability-minded region.

Located just a few blocks away from a new MAX station at the Tilikum Crossing, streetcar and bus lines, the project received Metro support in the form of a $300,000 Transit-Oriented Development grant that Killian Pacific credited with allowing the project to get off the ground and start construction ahead of schedule.

“Our initial approach to this project was that we were not going to even stick the shovel in the ground until we had a significant portion of the project pre-leased," said Lance Killian, president of Killian Pacific during an Oct. 23 celebration held at the site. “Metro and its TOD grant were part of the tipping point that created a willingness on our part to go ahead and build this office building on a spec basis. And I’m pleased to announce that we’ve received tremendous interest from businesses in the region who are looking to expand into this neighborhood.”

“This is a terrific building that echoes the historic character of the workspaces in the Central Eastside, but takes it a step further with this incredible wood construction,” said Metro Councilor Bob Stacey at the celebration. “This is what creative people look for in a workspace, and darn right: it’s close to transit. We have lots of projects in our region that we could be investing in, but this one adds the opportunity for high-paying jobs in an area that’s transit-rich. It’s an investment that the region will earn back in the form of increased ridership and the linking of jobs, housing and transit.”

Principal developer Noel Johnson spoke on the topic of choosing new mass timber materials to create a workspace that can draw tenants from the region’s burgeoning, creative tech and light manufacturing industries.

“What the built environment can do to support [creative] work is what I think this project is about,” Johnson said. “So, if this building is being a good muse for our new knowledge-based economy, and it’s incorporating the old economy as well through timber, then both are coming together to become one new synergistic Oregon economy.”

Mass timber is essentially a process of creating large, strong beams and columns out of a number of component pieces of wood, usually two-by-fours and two-by-sixes. The pieces are precisely measured and cut to specification from a computer rendering, and arrive at the construction site in pre-bundled kits ready to be joined together. In their final form, they create a structure that not only meets current building codes in terms of strength and seismic stability, but is also more sustainable given wood's smaller carbon footprint compared to steel and concrete.

Timm Locke, from the Oregon Forest Research Institute, said the Clay Creative project and other mass timber buildings on the way (Killian Pacific is constructing another similar building in downtown Vancouver) will show architects and developers the environmental benefits of working with this technology.

“Fifty percent of the dry weight of wood is carbon,” said Locke, giving a nearby beam a knock. “It’s pulled out of the air while the tree is growing, and it’s still there when the tree is cut down and turned into these wood products until the day that the building either burns or fall down and rot – so not for many, many years. So, wood is really carbon negative – you do spend energy making the timber product, but not as much as it already contains, and not nearly as much as you expend making other building materials like steel and concrete.”

Clay Creative is expected to finish construction by May 2016, Killian Pacific estimates. Hopefully by then, Locke said, there will be new state legislation introduced that will allow even taller buildings to be constructed from mass timber and its cousin, cross-laminated timber. 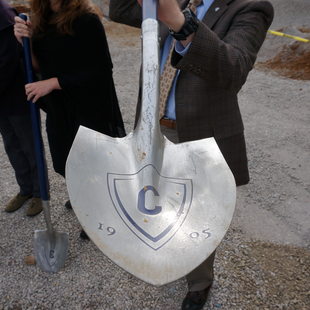 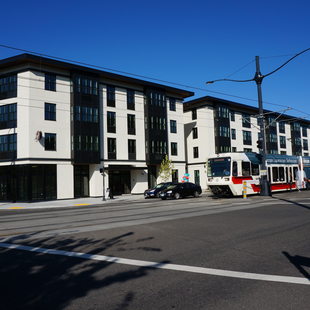