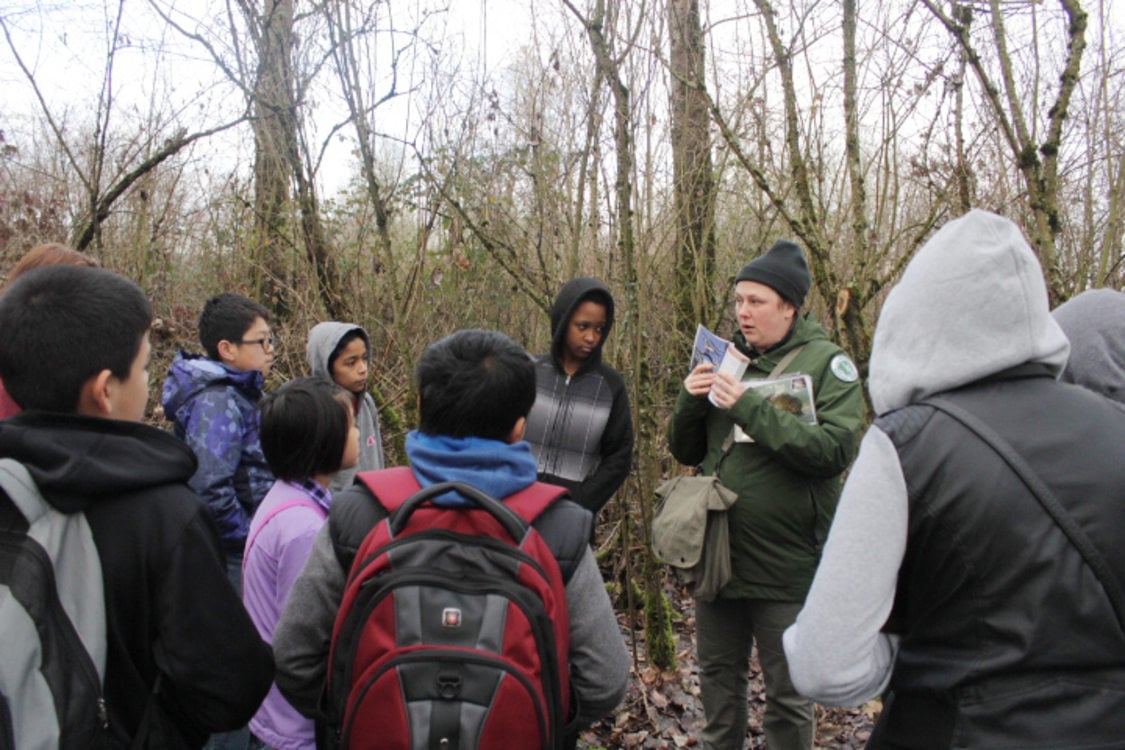 Metro Naturalist Alice Froehlich teaches Marathon Scholars about the birds that live at the Smith and Bybee Natural Area. 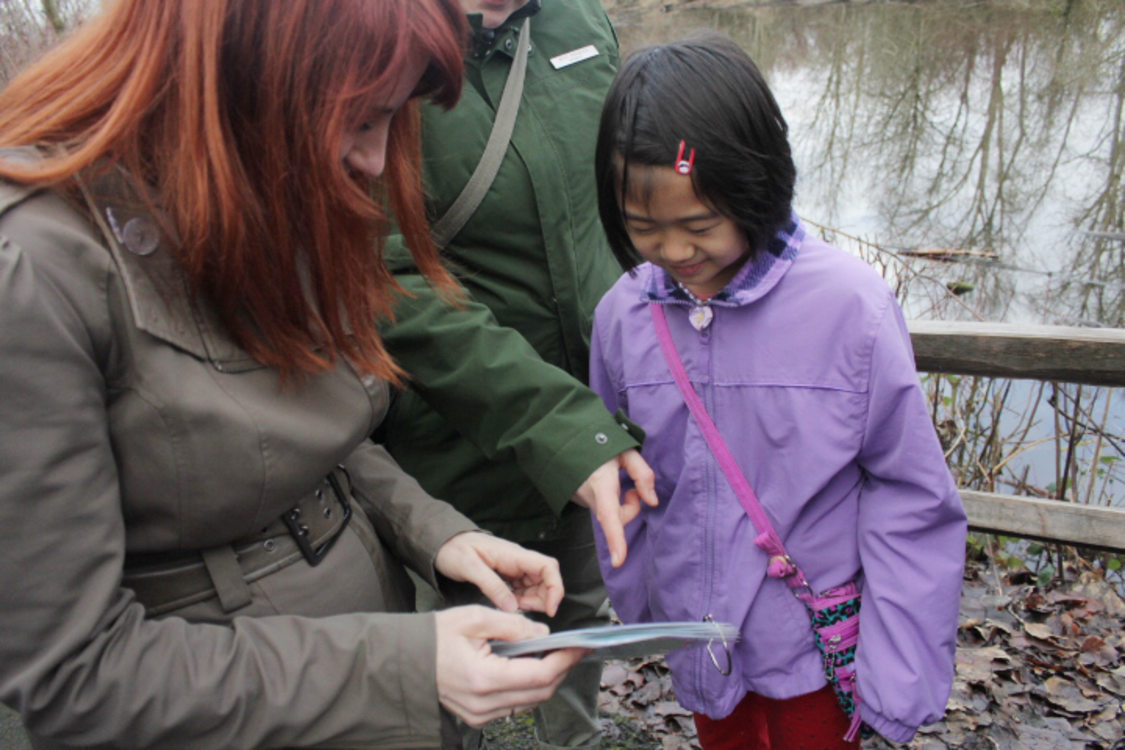 A student looks through a book of Smith and Bybee wildlife with Molli, Marathon Scholar program manager.

A student looks through a book of Smith and Bybee wildlife with Metro Naturalist Alice Froehlich and Molli Mitchell, Marathon Scholar program manager. 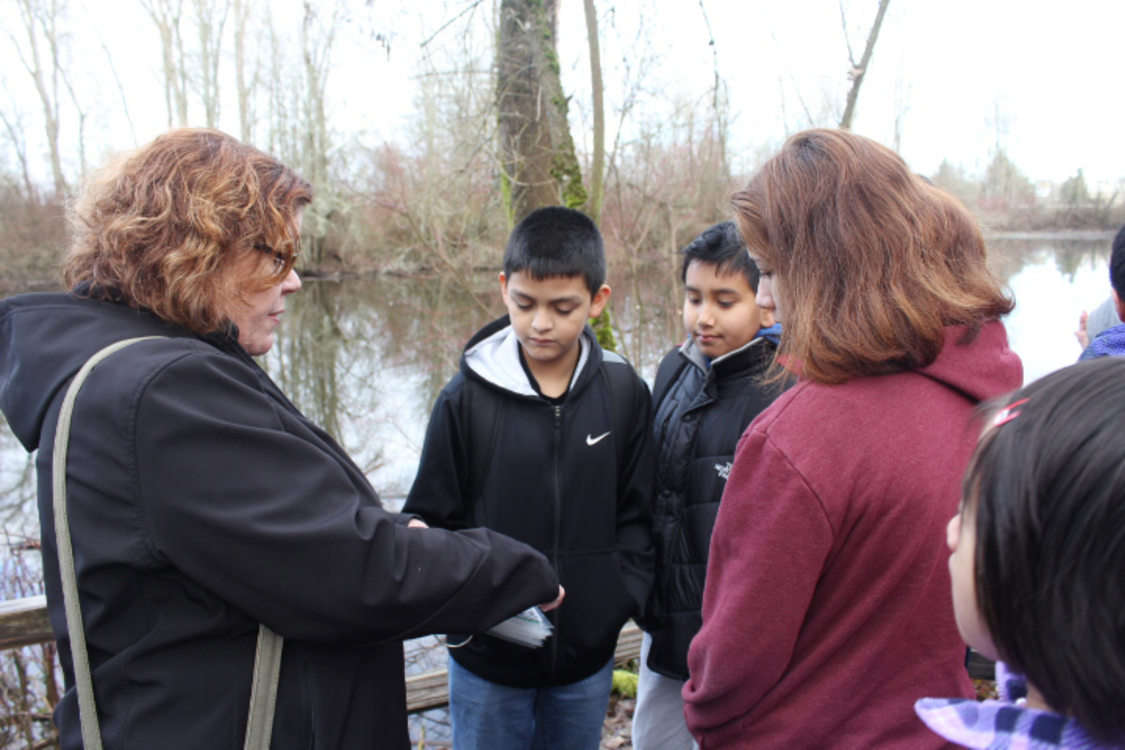 Students learn about wildlife that live in the area from Metro Natural Resource Scientist Elaine Stewart. 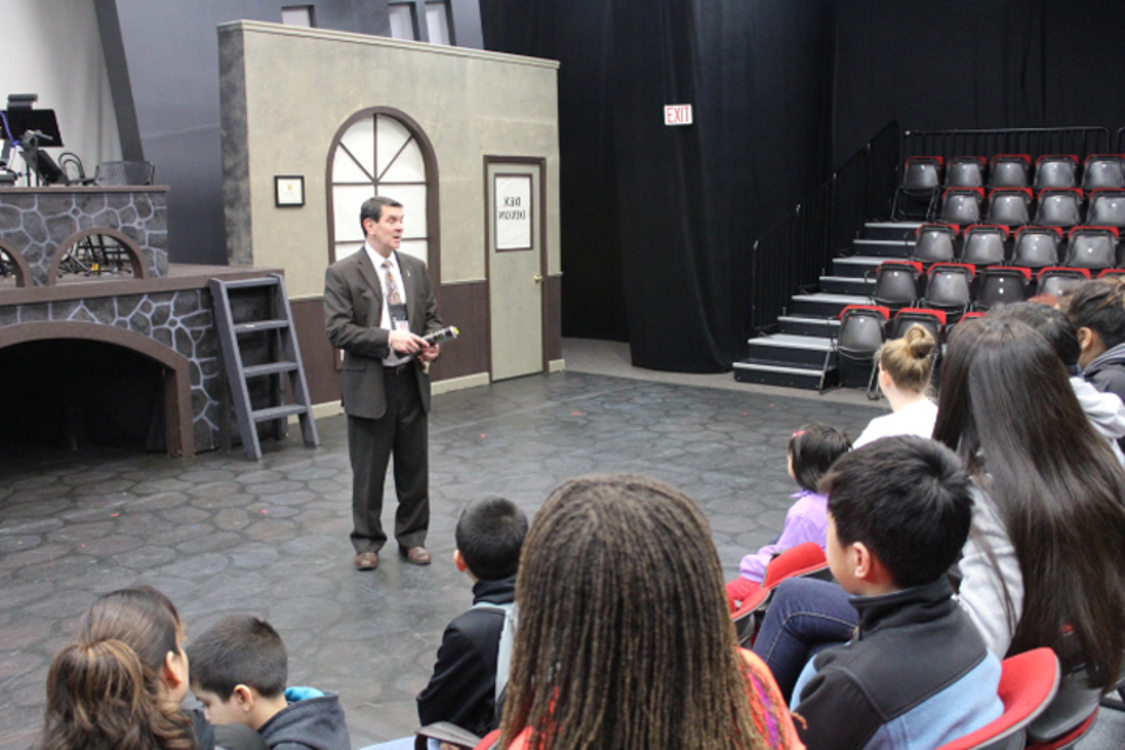 Director of event services Joe Durr tells Marathon Scholars of the many ways a "black box" theater can be arranged in Brunish Theatre in the Portland'5 Centers for the Arts. 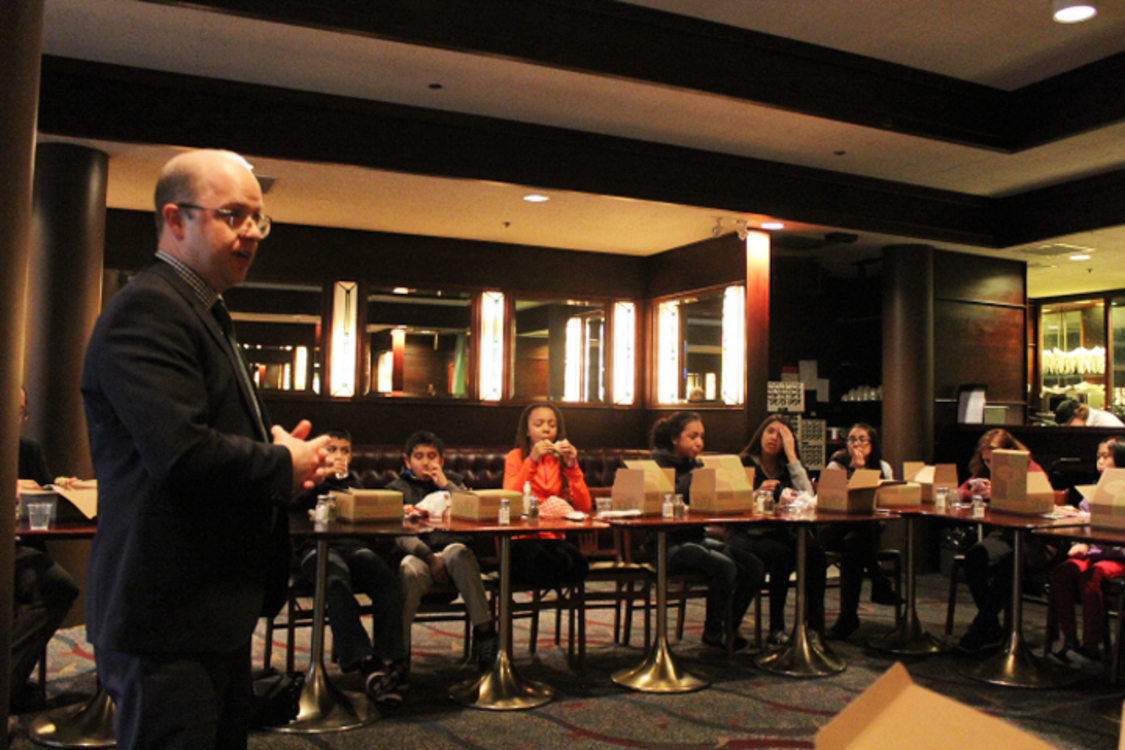 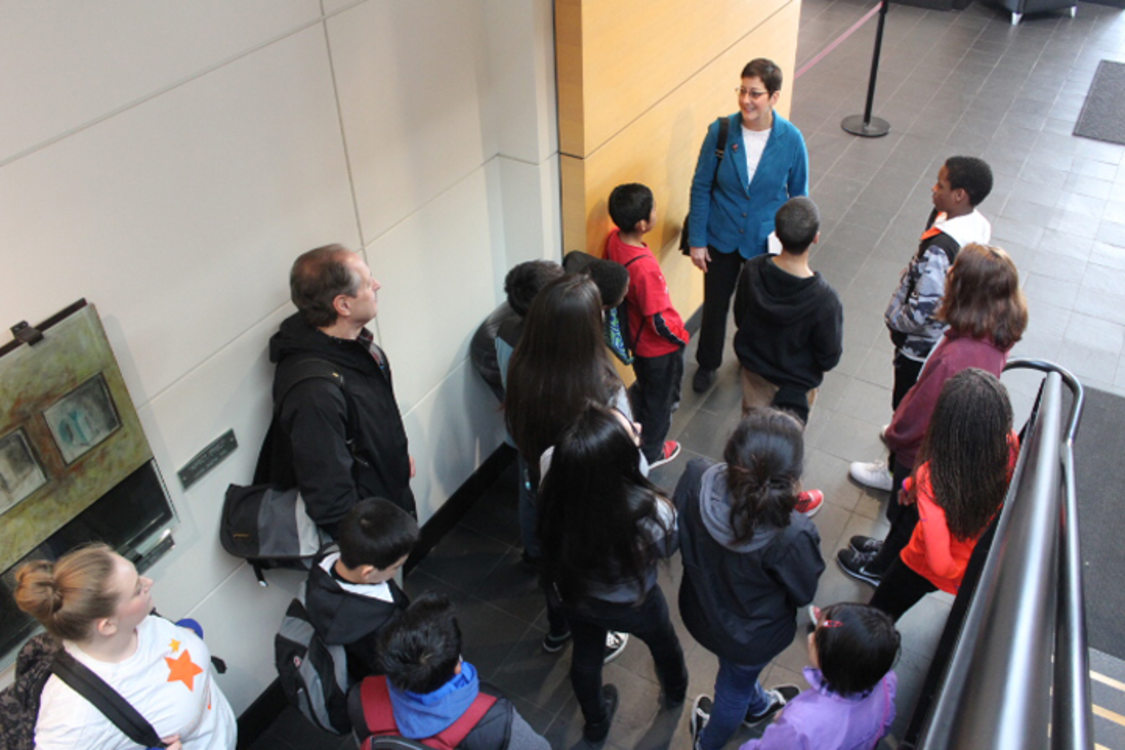 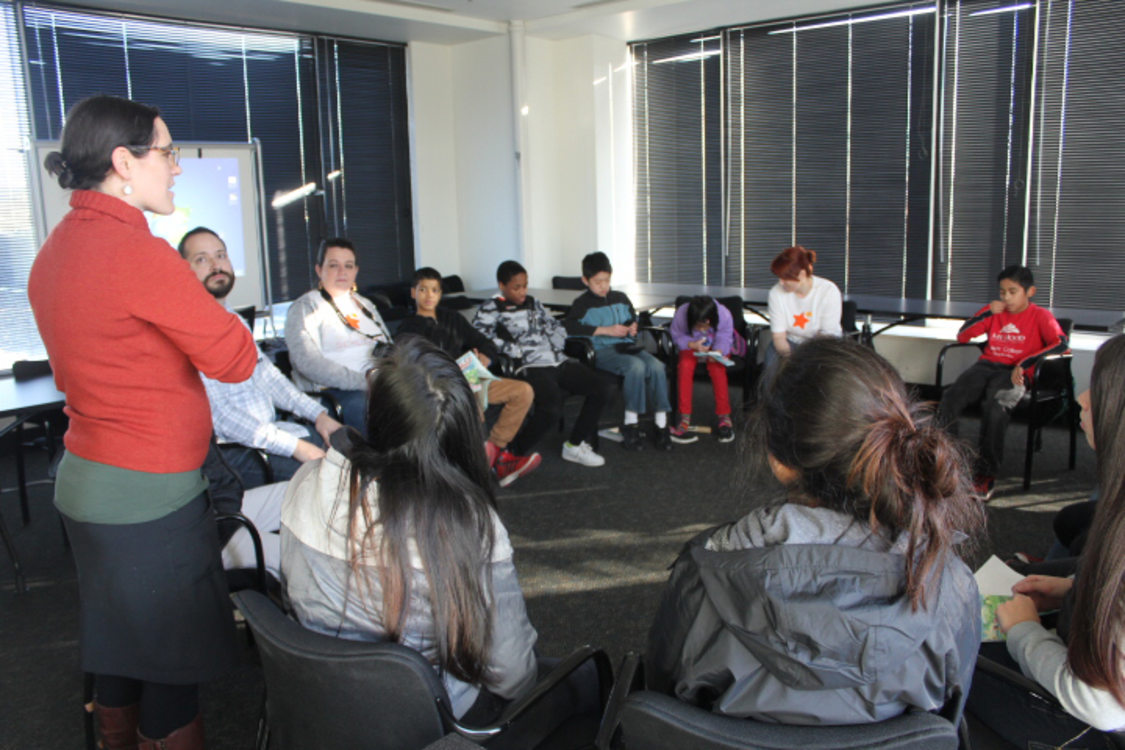 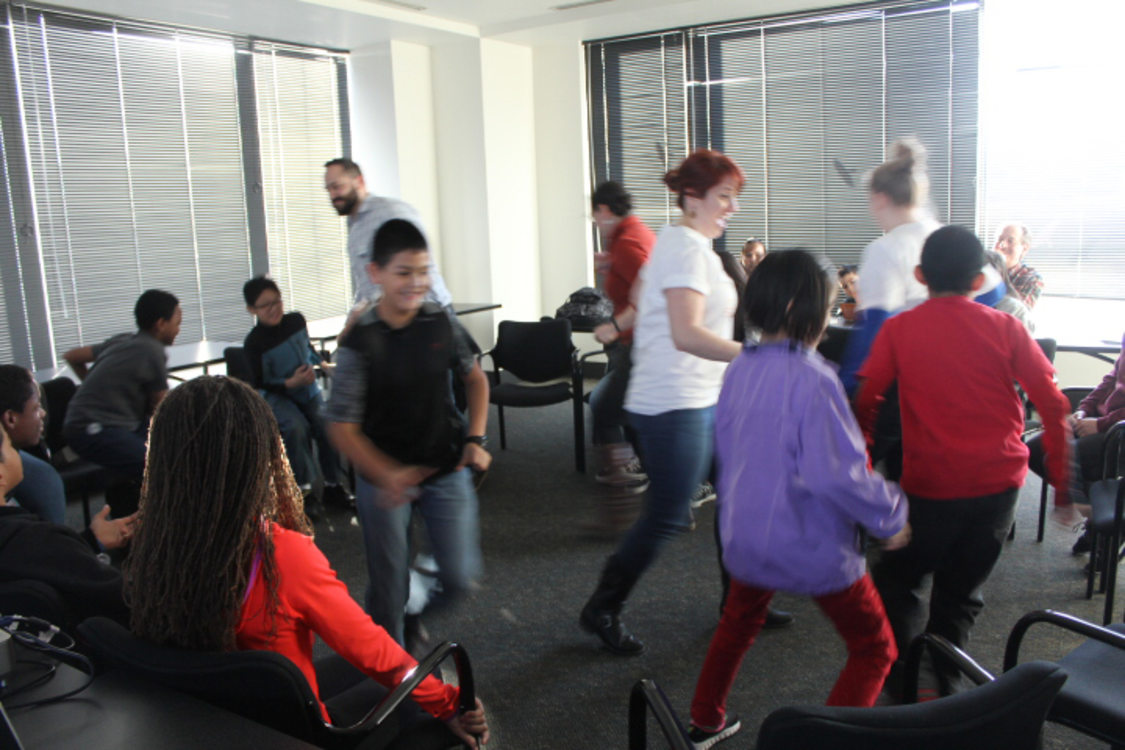 Students and staff run around in a sustainability themed game led by Kimberly Taylor. 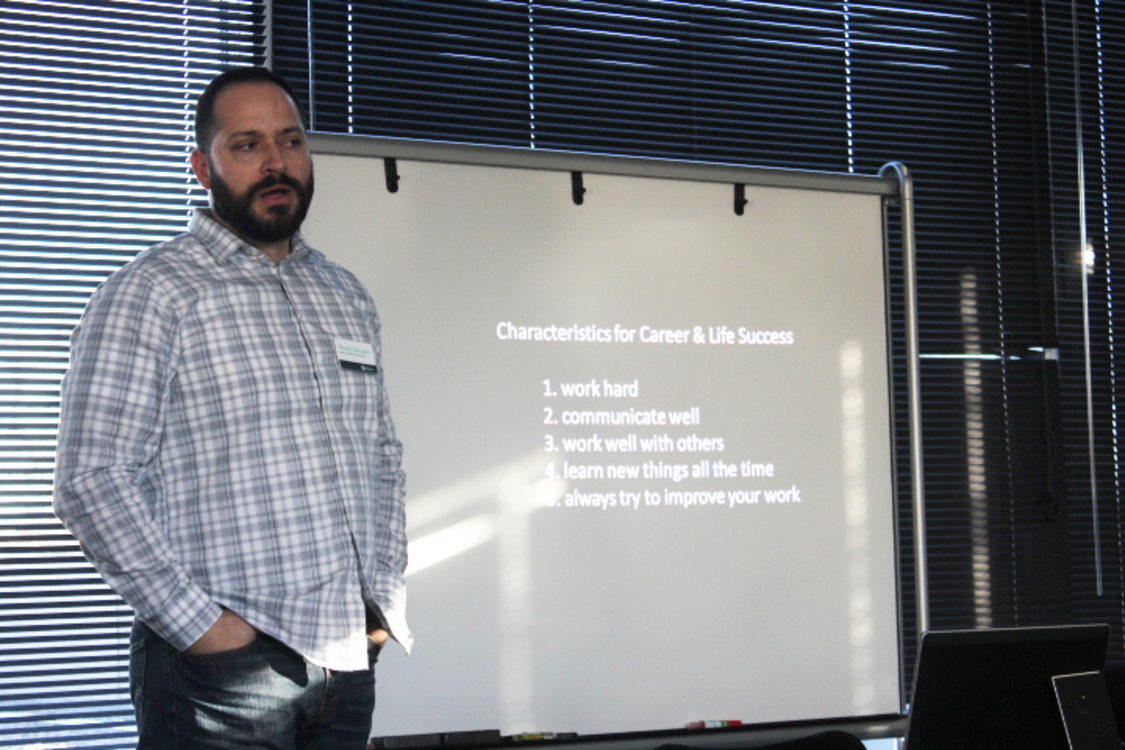 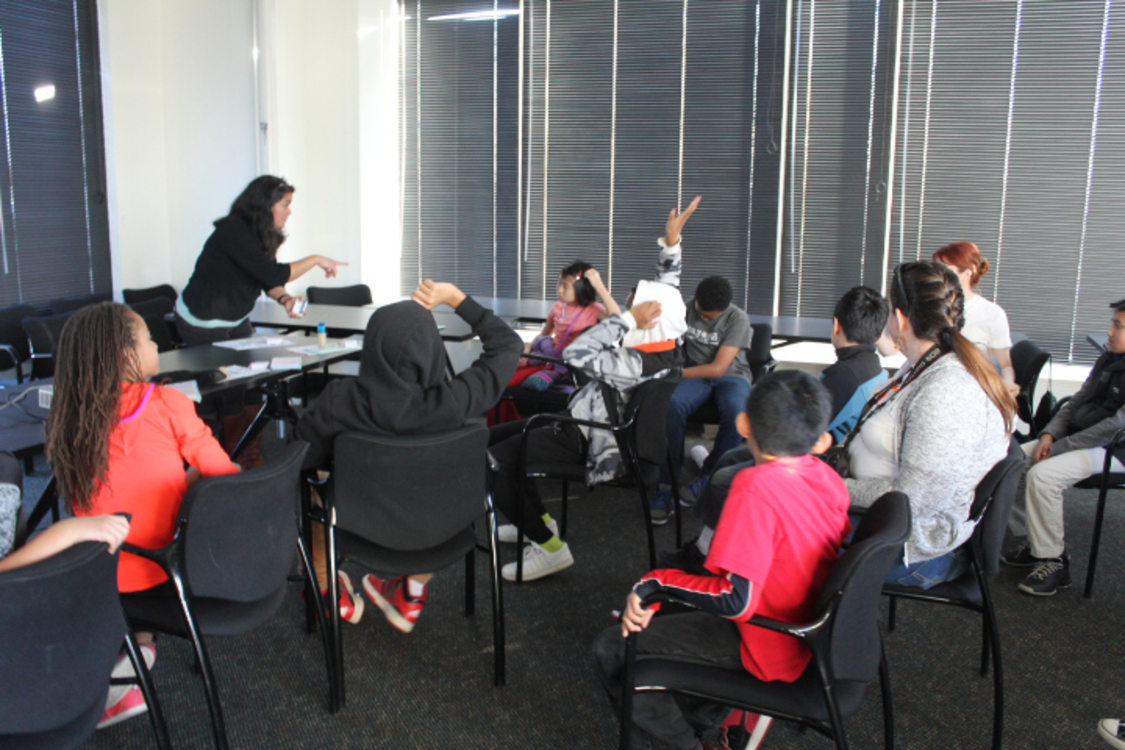 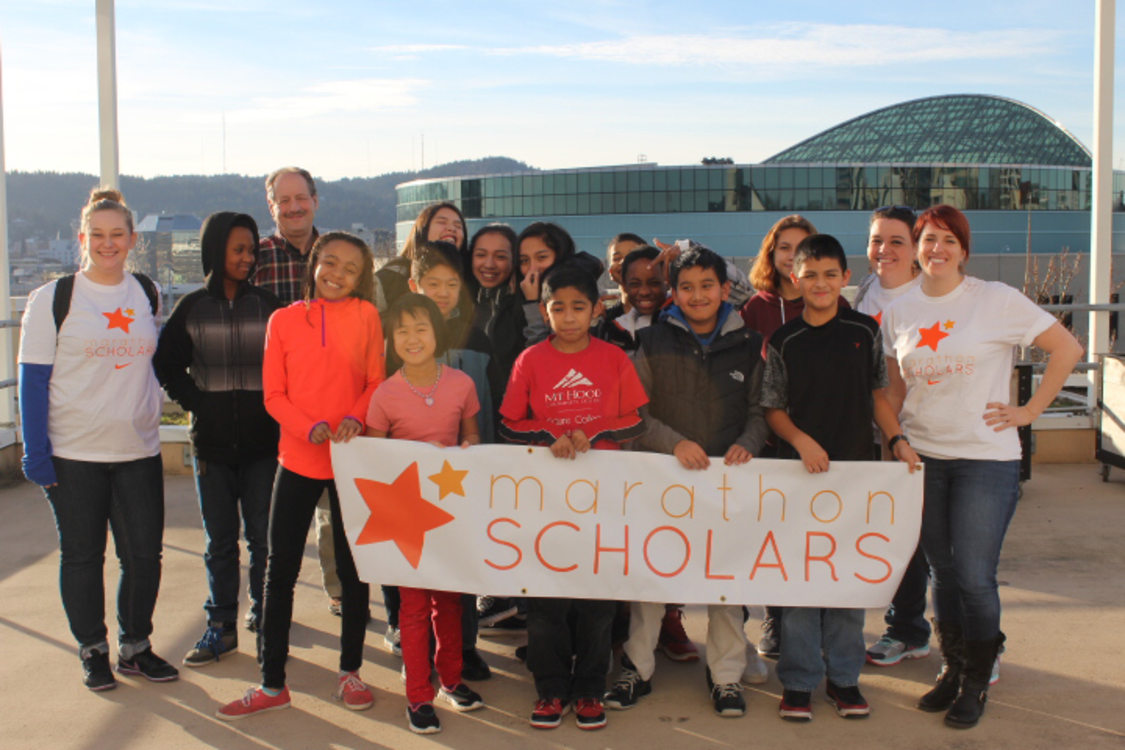 On a walk through a North Portland marsh, a group of young scholars pauses for a moment to take in the scenery. They’re watching and listening for wildlife, hearing songbirds call while, in the distance, a great blue heron scans the wetlands for a fishy lunch.

The students, part of greater Portland’s Marathon Scholars program, were on a day-long adventure through Metro’s natural areas, performing arts venues and other facilities managed by the regional government.

Their journey started at Smith and Bybee Wetlands, where the students were led by Metro natural resource scientist Elaine Stewart and naturalist Alice Froehlich.

A career day such as this is one of many enrichment opportunities available to kids through the Marathon Scholars program.

“We’re a scholarship and mentorship organization,” said Molli Mitchell, the program’s manager. Marathon Scholars matches fourth graders with a mentor and helps them get to and through college.

“We work predominantly with first-generation college students,” Mitchell said. The organization arranges group outings such as this at least once a month.

“Every student who graduates high school is eligible for a $12,000 scholarship from us,” she said.

After seeing what a naturalist and scientist do for a living, the next stop for the scholars was the Portland’5 Centers for the Arts. There, they met direct of event services Joe Durr, director of operations Jason Blackwell, director of ticket services Stephanie Viegas Dias and director of booking and sales Tom Sessa, who told them all about their jobs and how they got there.

Many of the speakers began in different areas of theater and worked their way up, such as Blackwell, who started as an usher.

“I was about your age when I saw dancers on stage and said, ‘I want to do that,’” Durr said.

The kids had many questions about famous people who had performed there and were thrilled to hear about when comedian Dave Chappelle announced a surprise show roughly a day before performing and sold out completely.

Aspiring rap artists Adarian Granville and Dante McFallo, 6th graders at H.B. Lee and Reynolds Middle Schools, respectively, wanted to know if they could rap there. Durr told them in the future it’s a possibility and in the present they should check with the Oregon Children’s Theater, also located at the center.

The scholars toured two theaters, the Newmark and Brunish, and learned about lighting and the different ways of arranging a stage. They were told of the many roles it takes to put a theater together.

“I didn’t know there were so many jobs in a theater,” one student said later.

After their visit at Portland’5, the scholars rode over to the Metro Regional Center and were welcomed by District 4 Councilor Kathryn Harrington. They toured the building and settled in the tower to hear from speakers with a variety of careers.

Cartographer Matthew Hampton led the way, showing many of the maps that he has made, including the Bike There! map, and handing them out for the kids to take home.

Hampton explained that he didn’t know he wanted to study maps right away, and majored in something different when he got his bachelor’s degree in college, but went back to study cartography.

Hampton said he felt he has the best job in the world for him.

Martha Bennett, Metro’s chief operating officer, spoke to the scholars about what it means to work in government. She explained that governments often get a bad rap but that it takes people who care working for the government to make a good government that can make a positive difference.

Kimberly Taylor and Darwin Eustaquio, Metro education specialists, shared their experiences in working with kids, both admitting that they had no idea they wanted their careers with Metro until they landed in them, but that they are very happy that they did.

Last the students heard from Janet Lee of human resources, who told them about the many different things someone in her job can do, such as mediate when there’s trouble or help other people find a job that’s right for them.

The kids were also impressed by her knowledge of Tupac Shakur.

Before leaving, Eustaquio pressed emphasis on the education the scholars will receive.

“If you go to college and you get a degree in something that you like,” he said, adding that for him it was psychology, “doors will open for you.”

“You’ll end up with a job that you like,” he said.

The students said college was their ultimate goal. The best part of the program, McFallow said, is simple.

“Having the opportunity to go to college.”