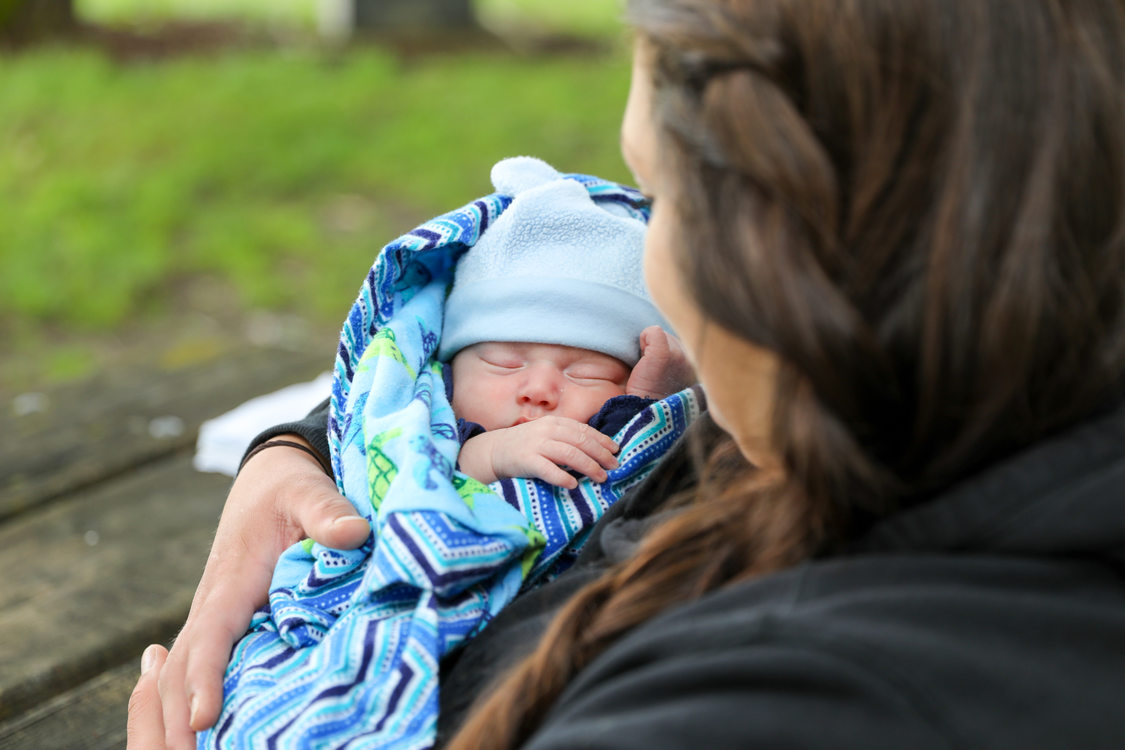 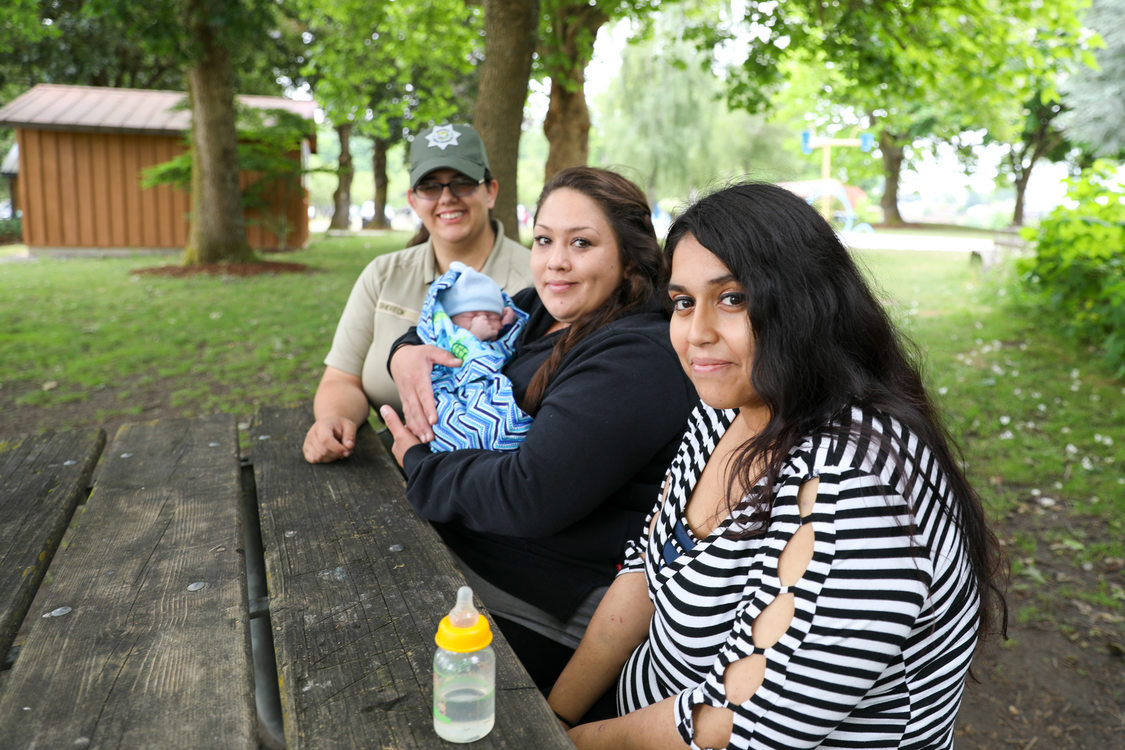 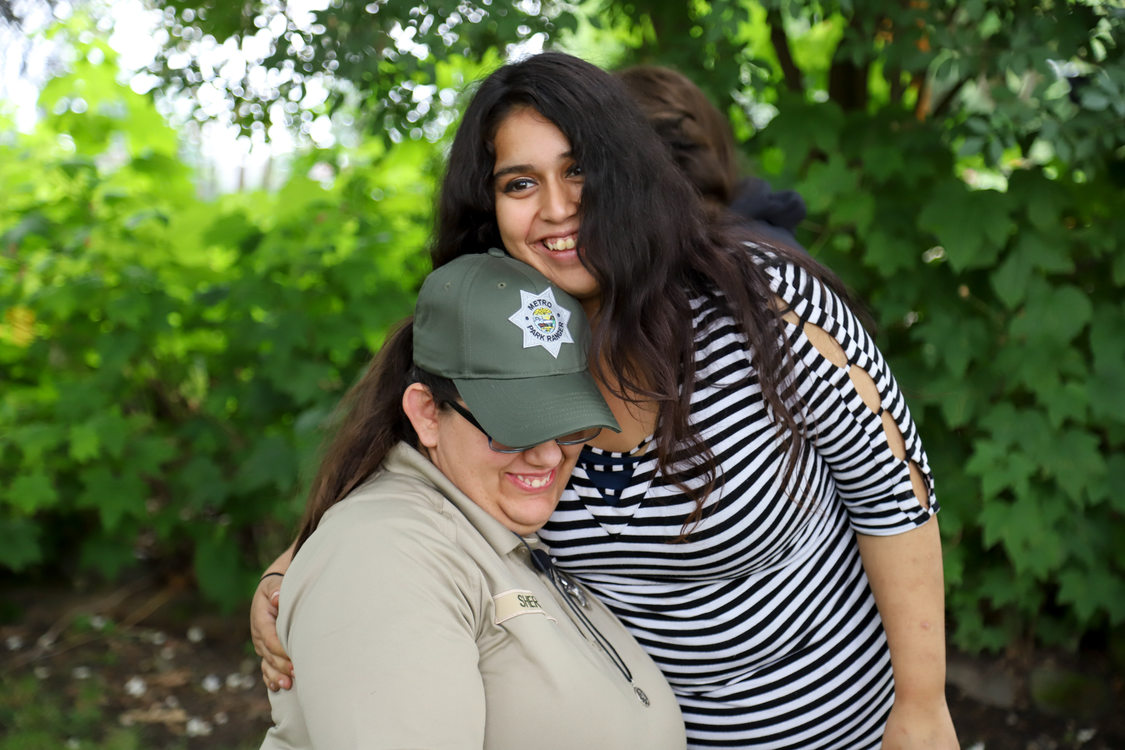 On a hot and sunny day on June 11, Delilah Villegas and her family visited Blue Lake Regional Park for a barbecue gathering and for the kids to cool off at the splash pad. The Southeast Portland family frequents the park every other week, and this particular visit came a week before the mom of two was scheduled to give birth to her third child via cesarean section.

The unborn baby had other plans.

Villegas’ water broke shortly after they arrived while she was using the bathroom at Blue Lake.

“I couldn’t stop peeing,” she said. “I got up and went to the next bathroom and was crying to my sister in law, ‘Can you guys help me?’ and then I saw his legs hanging out from me, and that’s when everybody asked for help.”

One of her sisters-in-law, Jeceri Mayo, noticed a few of her family members grouped around the bathroom stall, so she went to check out what was going on.

After that, Mayo says Villegas screamed in pain. The baby was in the breech position, with the legs coming out first instead of the usual head-first position.

Park Ranger Rena Shereck heard the scream while patrolling a nearby parking lot and rushed to the scene.

“I knew that kind of scream because I’ve heard it before, but this was the first birth that I’ve actually been able to assist (with),” Shereck said.

She called 911 and relayed instructions to Mayo and a couple of women who came over to help. When the baby was born, he initially wasn’t breathing.

Shereck instructed the women with different approaches to get the baby to breathe before they would consider attempting chest compressions.

“I put my finger in (his mouth) to try to get the stuff that was blocking his airway,” Mayo said. “When I felt him breathe a little bit, I tried to get the rest of the stuff out, and (one woman) was patting his back to get him to wake him up.”

After a few nerve-wracking moments, he started to breathe.

Shereck said waiting for the baby to start breathing and crying was probably one of the scariest moments of her life.

“People who work in labor and delivery do this on a daily basis,” Shereck pointed out. “When you come out to a park like (Blue Lake) where it’s family-friendly and you’re out for a barbecue and having a good time, you don’t expect something like that to happen. To be able to assist in something like that is just absolutely amazing, and it’s an experience I will take with me for the rest of my life.”

When paramedics arrived, they confirmed the baby and mom would be fine and took them and the baby’s father to Randall Children’s Hospital. They named the baby Levi after his father and nicknamed him Baby Blue. Villegas is also mom to Maribel, 5, and Alevina, 2. She said Levi is a calm boy who doesn’t cry much and sleeps through the night, especially in comparison to his two older siblings when they were babies.

“He only wakes up when he’s hungry or (needs a diaper change),” she said. “(My older children) are happy with him. They like everything about him.”

Villegas, a stay-at-home mom, returned to Blue Lake three weeks later – the first time since delivering Levi. During the visit, she also introduced Levi to Shereck for the first time.

“(Coming back here) doesn’t feel weird or anything,” Villegas said. “It’s just crazy because I had a baby in the bathroom, and I didn’t even think that was going to happen. I’m really happy because if it wasn’t for Jeceri, I don’t know where I would be or my son would be. She’s the one that saved his life.”

For Mayo, visiting Blue Lake from now on will be different.

“I can’t come here and not think about what had happened,” she said as Levi slept soundly in her arms. “I know it’s going to be something far more special to us than what it is now.”