Over the spring and summer, local community organizations worked with Metro to bring diverse perspectives to decisions about how to manage the garbage and recycling system.

The groups hosted a series of events in all three counties that included community conversations, tours of garbage and recycling facilities, online surveys and roundtable forums with elected officials. The process was designed to ensure that members of communities that have been historically underrepresented in government could play a key role in the development of the next Regional Waste Plan.

Center for Diversity & the Environment

“I think people of color and marginalized communities are often left out of these decision-making spaces so I think it’s cool that Metro is really engaging with the community and seeking the input,” said Amandeep Sohi, who participated with a group from Momentum Alliance, a youth-led organization focused on social justice.

For many participants, this was the first time they’d ever talked to or worked directly with a government. On-site interpreters at each event translated the event for both Russian and Spanish-speakers.

Elizabet Rubio, a participant with Centro Cultural, came to the U.S. eight years ago, from Michoacán, Mexico and has been living in Washington County since then. Rubio says it’s important for people in the community to get involved because these decisions affect them directly.

“I think it’s great we participate and provide input because we are here – we live here,” Rubio said. “Our children were born here and I think it’s necessary for me to contribute as well.”

Valerie Curbelo, a participant from Constructing Hope, moved to Portland about a year ago from Miami, Florida. She says she got involved because she’s interested both in sustainability and tiny-house living, and was particularly struck by the tour of the Metro Central Transfer Station.

“The transfer station visit impacted me bigger than I thought it would,” Curbelo said. “Just being there and seeing with my own eyes what they were talking about – it’s a huge difference speaking about it in a room and then being taken to it physically.”

Bella Gurvich, who participated with the Immigrant and Refugee Community Organization, said she was interested in learning more about recycling and composting because she cares about having a clean environment. As someone who immigrated to the U.S. nine years ago from the former Soviet Union, she says she’d like for people to understand how important these things are in a place like Oregon.

“I like our state very much and I understand how important it is we have clean air and a good green environment for us, and more importantly, our children and grandchildren,” Gurvich said.

At three forums in October, community members shared tables with local elected officials from Metro, county and city councils. Forums started with dinner, and then focused on roundtable discussions in which decision-makers could hear directly from community members. Participants shared stories about how the system affects their lives and those of the people they know. Repeatedly, people also talked about possible job opportunities in their communities and how they themselves could become part of the garbage and recycling system.

Sohi shared his surprise at how little some officials considered the accessibility of waste facilities for people who don’t own a car or have easy access to public transportation. “I had to be the person that was like, you know, not everyone has access to a car, people can’t drive all the way to Oregon City or North Portland to drop off their garbage,” Sohi said.

Emma Brennan, a representative from Oregon Tradeswomen, says that during the conversations at her table, she realized she was thinking about issues others, including elected officials, were not even considering.

“There are a few things that I’ve been thinking really hard about that I realized are totally not on their radar,” Brennan said. “How renters deal with trash is a little bit different than the way homeowners deal with trash.”

Brennan is also a member of Metro’s Equity Work Group, which formed to help make sure that the next Regional Waste Plan tracks to the goals of Metro’s Strategic plan to advance racial equity, diversity and inclusion.

Metro Councilor Kathryn Harrington, who attended the forum at Centro Cultural, says that the opportunity to have a conversation with the community reinforced many ideas she already had. She says the event was a good way for elected officials to "not talk at people, but instead talk to one another."

"People really care about Mother Earth, this planet," Harrington said. "We all know we have this stuff in our lives – the food we eat, the items we buy and use. It was a really fun experience in that way of coming together and figuring out how we're going to deal with all this stuff."

A learning experience for all involved

Attendee David Grandfield, who is a part of Environmental Professionals of Color, says the events provided a space for him not only to learn about the work other community organizations are doing, but also to be inspired by younger people who brought fresh ideas to the table.

“Whether it be elected positions or nonprofits or public agencies, all those people are really inspiring to me,” Grandfield said. “That’s why I always make myself come back out here to keep myself inspired and motivated to do this good work.”

Grandfield said that although he enjoyed the events, he warns organizers and attendees of power structures that could prevent the conversation from being productive.

“There are white politicians and white people who take control of the situation, so always keep that in mind,” he said. “Use other voices no matter what their positions are, empower new, young people – especially women – to get up there and lead some of these events.”

With many different community leaders in attendance, Juan Carlos González, development director at Centro Cultural, says it was a good opportunity for those new to engaging in public decision-making to learn to be effective participants and leaders.

"The process was special because Metro activated and empowered the leadership that lives in communities," González said.

Participant Abigail Lawrence, who is a member of the Patient Wellness Council of the North by Northeast Community Health Center, says she learned quite a bit from attending all the events Metro hosted.

“I’m grateful to have this opportunity to have my voice heard and my questions answered,” Lawrence said. “I think they’re on the right track in reaching out and having more voices in the conversation.”

In addition to the spring and summer events, Metro has also conducted online surveys and collected a range of comments via social media. Themes in feedback will be released in a report soon.

Spring and summer 2017: In person and online, community members share their priorities and their vision of the future of garbage and recycling.

Fall 2017: Based on public input, Metro refines a scenario that best represents a shared vision and goals of a future system.

Spring and summer 2018: Community members provide input on possible strategies and actions in a future system.

Summer 2018: Based on public input, Metro develops a draft of the 2030 Regional Waste Plan.

Fall 2018: Communities provide input on the plan draft. Then Metro presents the refined draft to Metro Council for adoption. 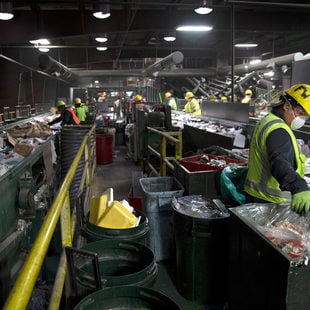