For the Forest Grove community, Pacific Avenue is home to several key city locales, including the historic McMenamins Grand Lodge and the tranquil Pacific University – both important elements in the community. Now, the quaint street will be home to a new presence that officials hope will be a catalyst for a new era in downtown Forest Grove.

On Dec. 1, representatives from the city of Forest Grove, Tokola Properties and Metro attended the groundbreaking of The Jesse Quinn Apartments, the first modern mixed-use development in downtown Forest Grove.

At the event, officials gave remarks about the future of the complex and the significance of the property in Forest Grove.

“The project is a right fit for our city in so many ways,” said Forest Grove Mayor Peter Truax. “While this is not the ultimate cure for our community, it plays a vital role in the investment of our downtown and the investment in our future.”

A common theme at the groundbreaking was urban renewal – a buzzword that guests repeatedly used to describe the economic future of Forest Grove.

The market-rate, mixed-use development is the first of its kind in the city’s historic downtown. The four-story structure will feature 73 apartments with an additional 2,500 square feet reserved for retail space. A playground, fitness center and a garden with also be included on the property, which once housed a printing plant called Times Litho.

“It will help with housing shortfalls in our city, our county and our state,” Truax said. “It will serve as a catalyst moving forward in the rebranding of Pacific Avenue amongst other things.”

Metro Councilor Kathryn Harrington, who represents Forest Grove as part of District 4, stressed the importance of investing in properties that support economic feasibility.

Harrington also praised the city’s effort in pushing forward with a clear vision for the future of Forest Grove.

“It’s because of the vision that this community has and the hard work day in and day out,” Harrington said.

The city of Forest Grove partnered with Tokola Properties, a Gresham-based developer specializing in mixed use properties, and Metro, to bring the $15.5 million project to fruition.

Forest Grove’s urban renewal agency previously owned the Times Litho site. The agency transferred the property to Tokola for the project and also provided fee waivers and abatements to make it possible. Metro’s contribution comes in the form of a $250,000 Transit-Oriented Development grant.

“Your city does a good job of collaborating with the private sector, as well as other public sector partners,” Harrington said. “As the expression goes, many hands make lighter work.”

The Jesse Quinn Apartments will be on Pacific Avenue, between A and B streets, along TriMet’s Frequent Service Bus 57-TV Highway, with access to the MAX Blue Line in downtown Hillsboro.

“The Jesse Quinn was a great project for Metro to participate in,” said Patrick McLaughlin, a senior development project manager at Metro. “It provides excellent access to TriMet’s Frequent Service line right outside the door while creating additional store frontage and amenities along Pacific Avenue.”

Tokola Properties president Dwight Unti said that with time, his company hopes to continue development on the vacant side of the site.

“In Forest Grove, they set out with a determination to have their downtown reemerge,” Unti said. “They set forth a plan and they started to execute that plan.”

The building is set to open to residents in 2018. Officials hope it’s just the beginning of more housing choices and economic activity in downtown Forest Grove.

“The word transformative has been used to describe the project,” Unti said. “I think catalytic is what we hope it to be.” 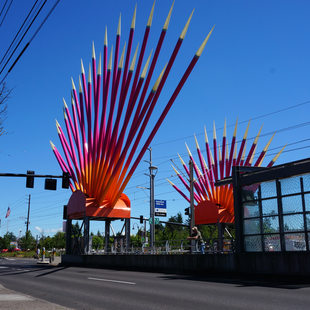