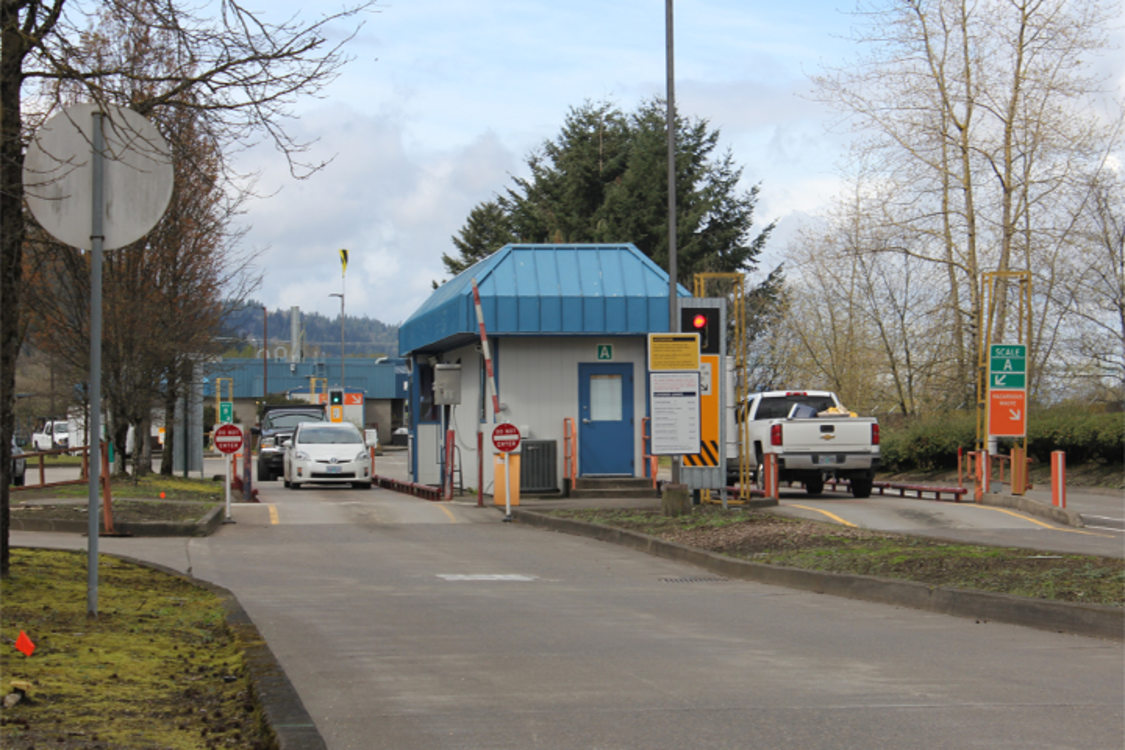 Customers check in at the scale house, where their vehicles are weighed before they start unloading.

The first step of a visit to Metro Central transfer staion is a stop at the scalehouse. Cars and trucks are weighed in before they start unloading and weighed out before they leave. 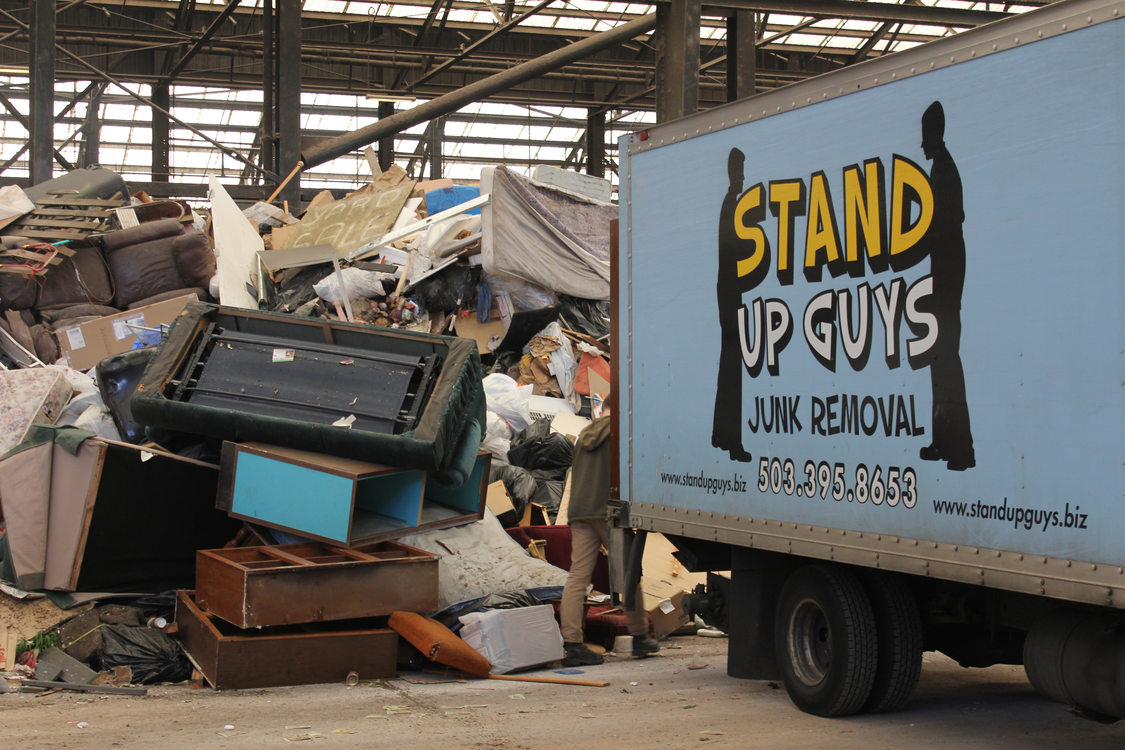 Private contractors add to the heap, with bookcases and Tarot cards scattered at their feet.

Inside the transfer station, both individuals and private contractors unload trash into a giant heap. 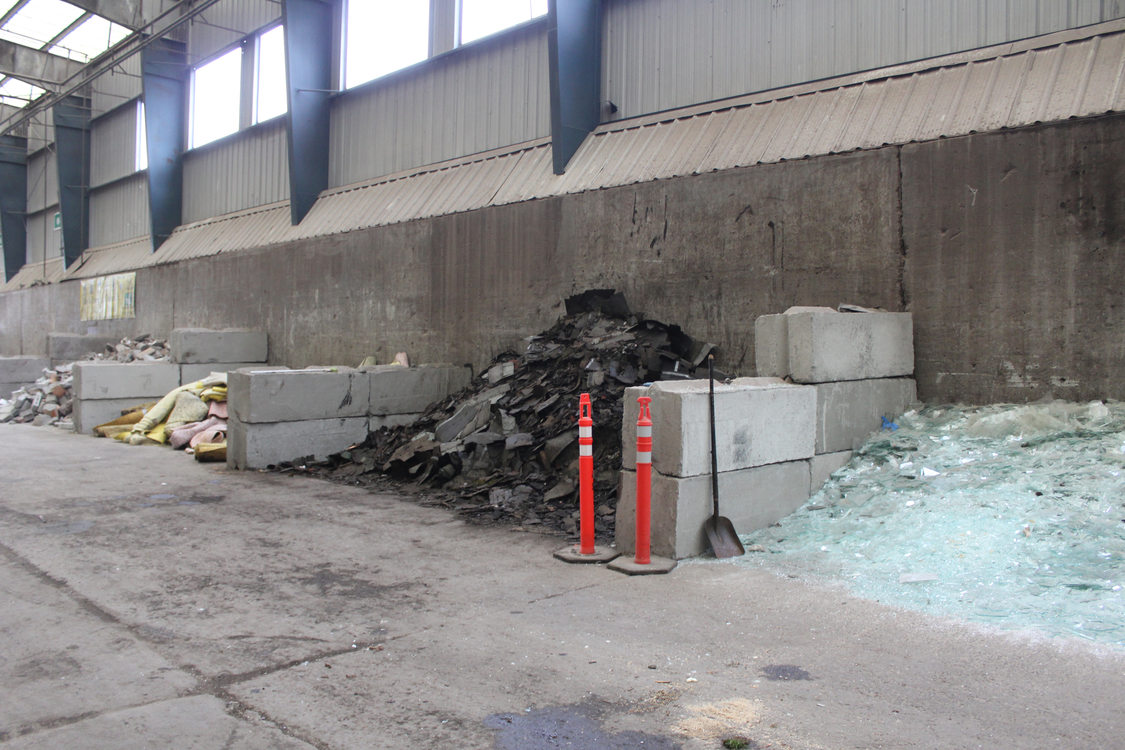 Part of the recycling area at Metro Central Transfer Station.

Materials like glass and carpet are unloaded into separate piles to be recycled. 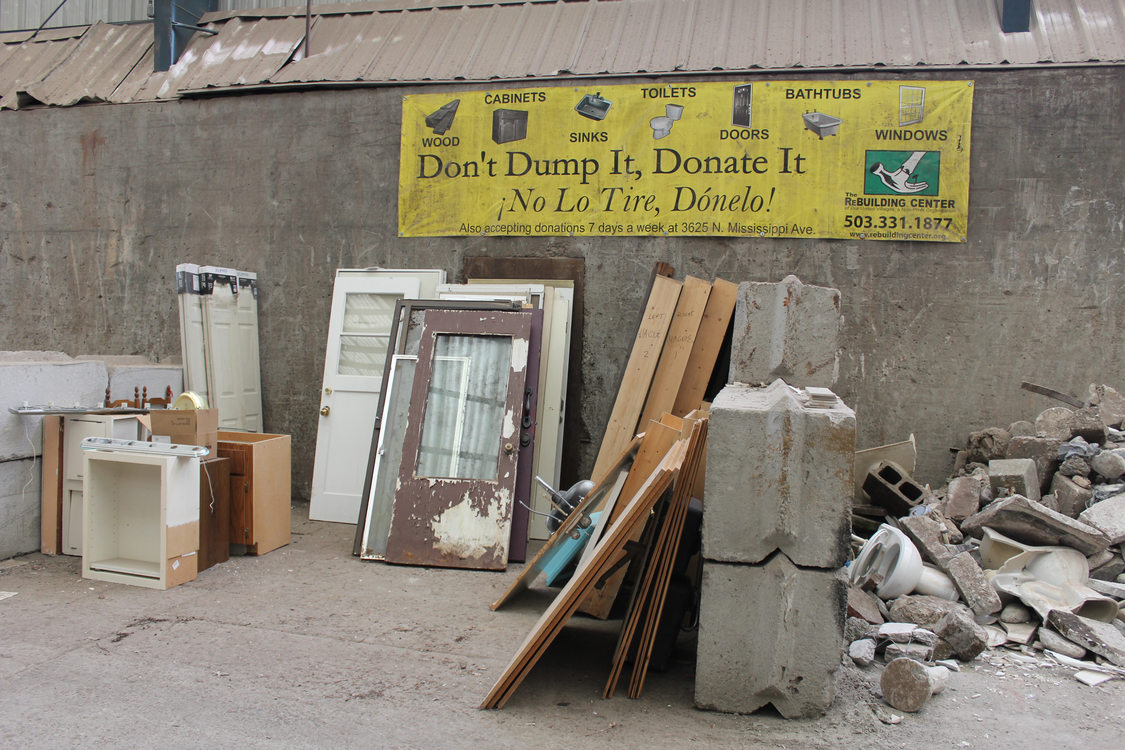 One of the many recycling areas at the transfer station collects still-usable equipment for homes.

Construction waste makes up a signifcant portion of what comes into Metro Central. 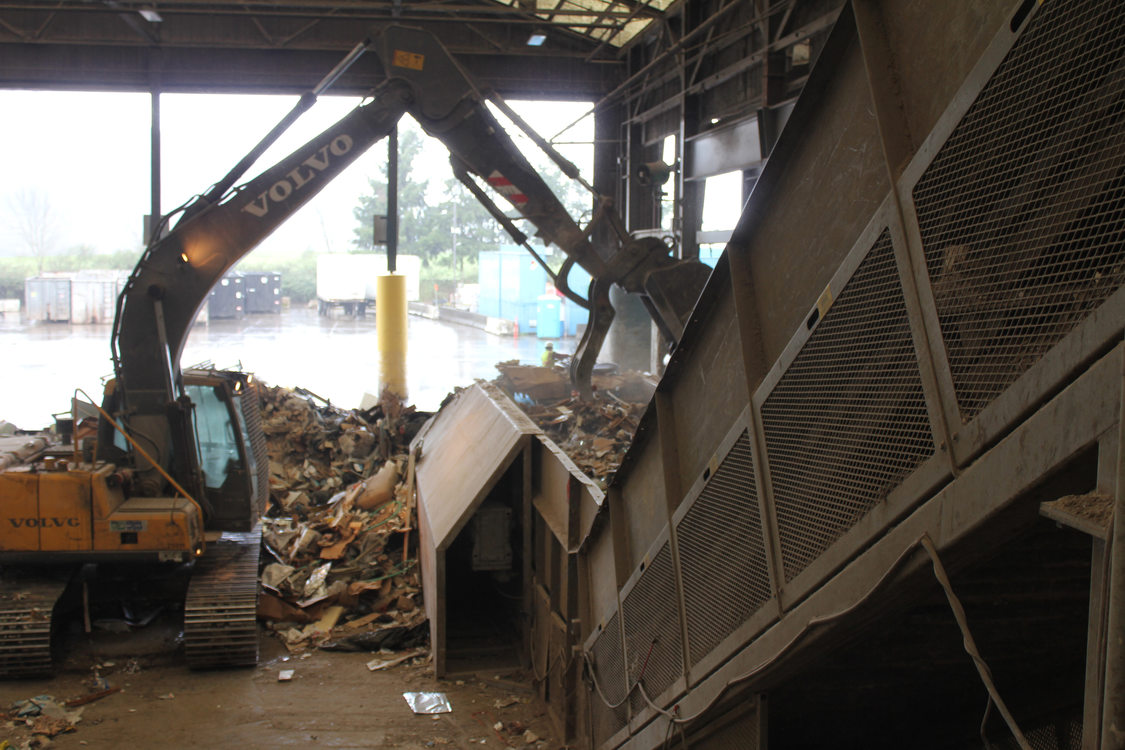 Dry waste from Bay 1 is dropped onto a ramping conveyor belt, to lift to workers who will pull out anything that can be recycled.

Mixed garbage is dropped onto a ramping conveyor belt. Workers then sort the waste to pull out anything recyclable. 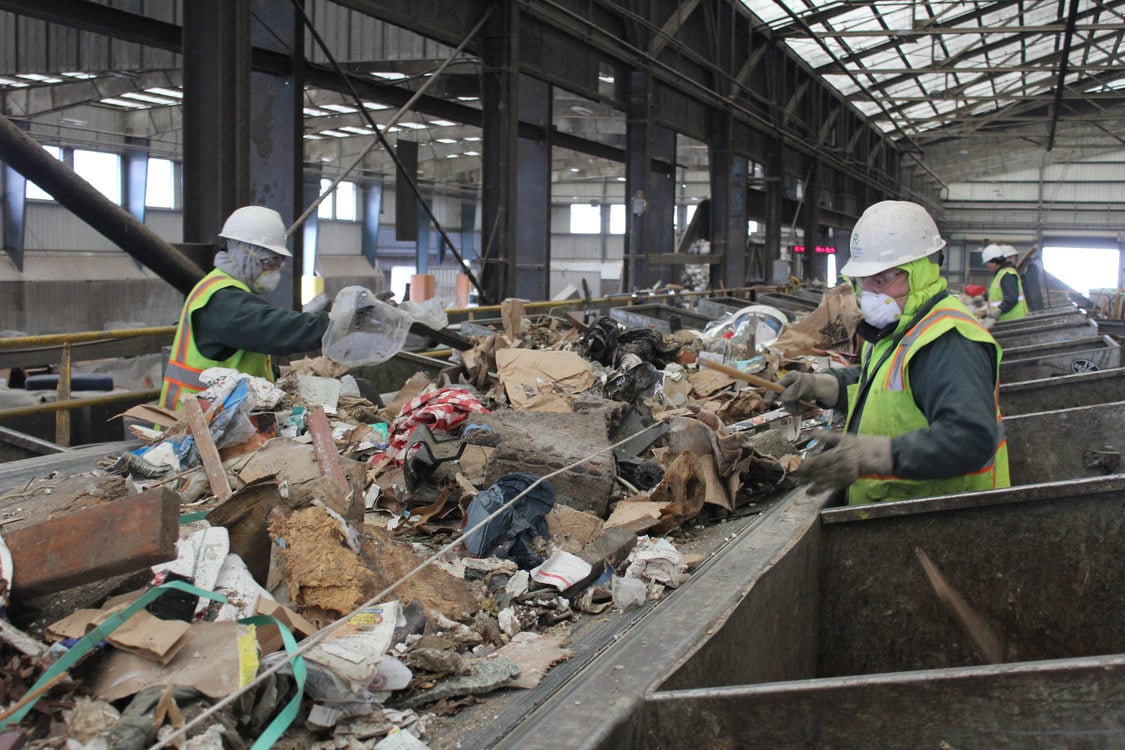 Recology workers sort through dry waste, pulling all recyclables from the waste stream. All dry waste at the facility goes through this process.

Workers at Metro Central transfer station sort through dry waste, pulling out anything that can be recycled. 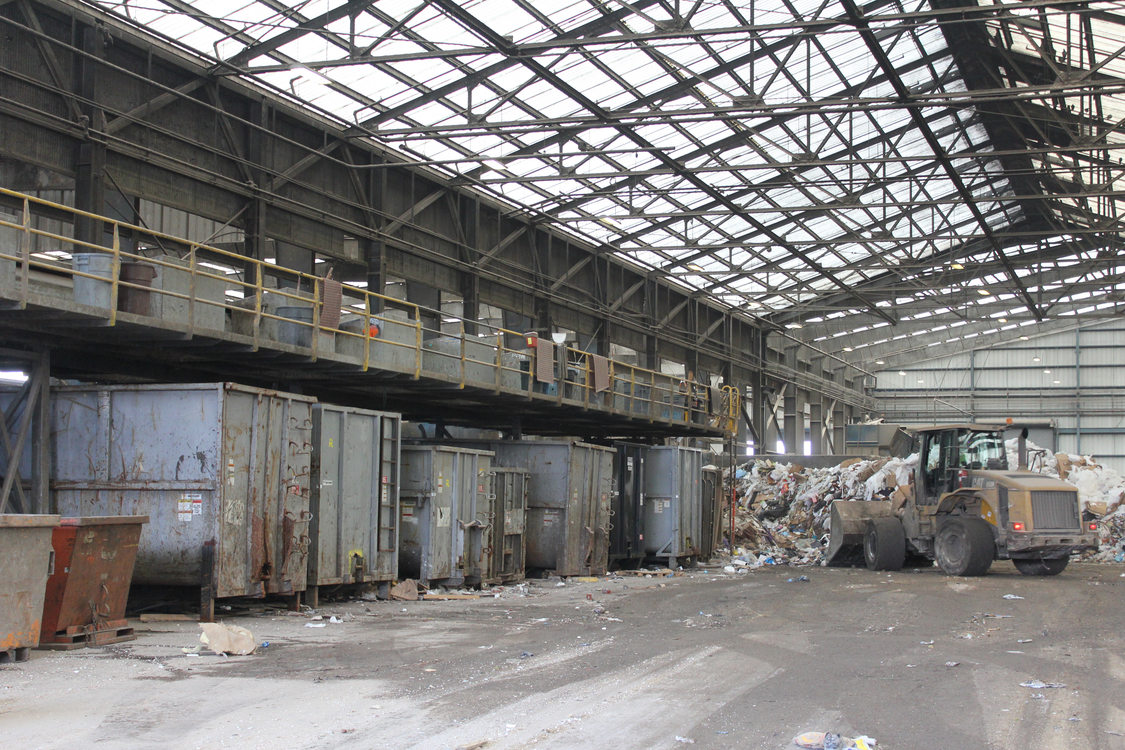 Another view of the sorting line. As workers pull recyclables, they drop them into designated bins below.

Workers drop recyclables into designated bins below the sorting line. 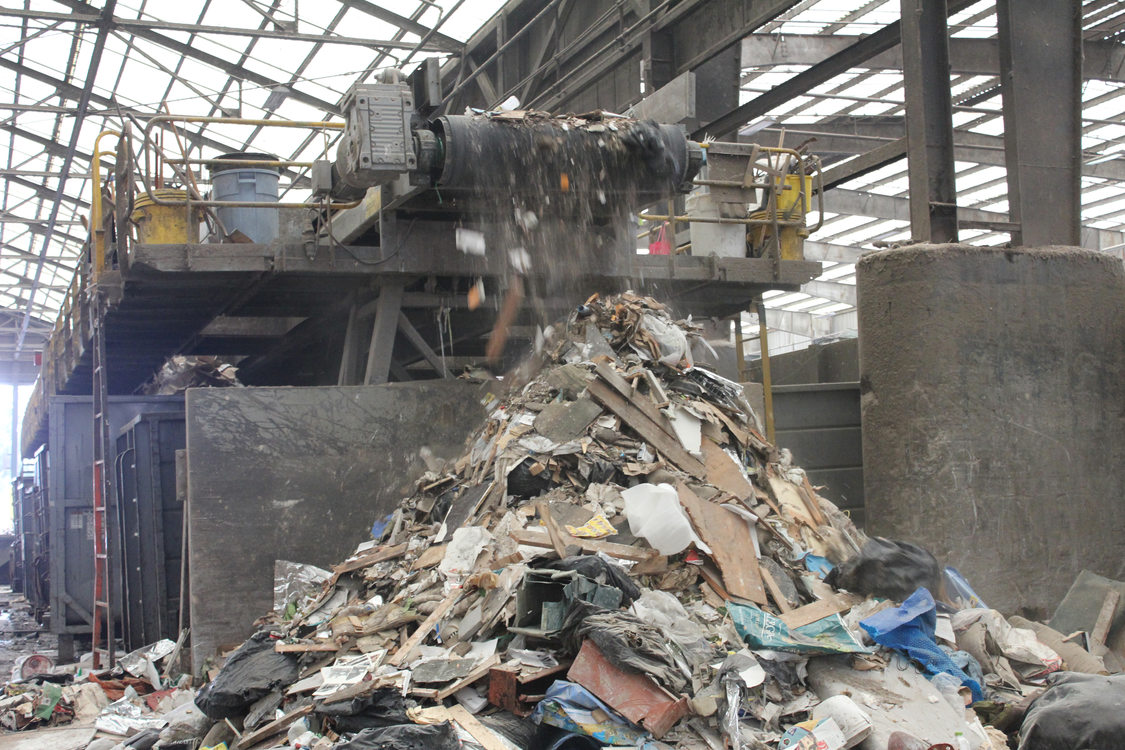 Unsalvageable dry waste drops off the end of the line where it has been picked through and sorted by Recology employees.

After it's sorted, garbage drops off the end of the line. 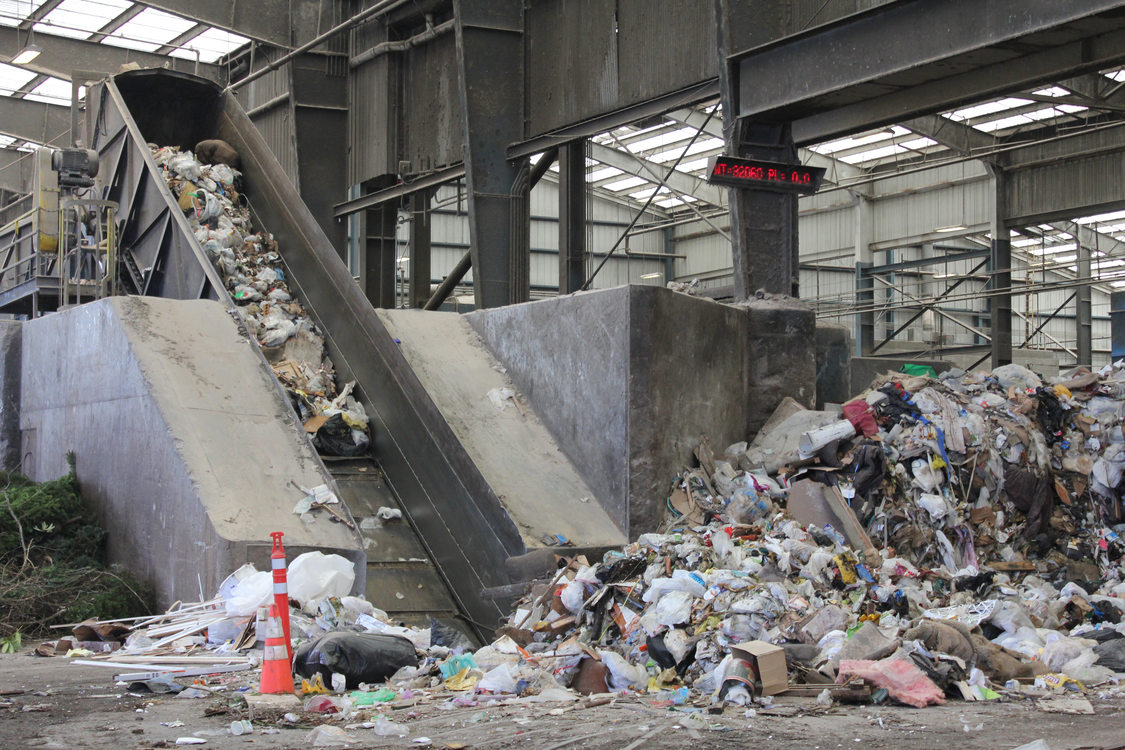 Non-salvageable waste is worked into a pit and up a ramp, where it will be compacted into a semi-truck trailer.

Garbage is worked into a pit and up a mechanized ramp into a compactor that loads it into a semi-truck trailer bound for a landfill in Eastern Oregon. 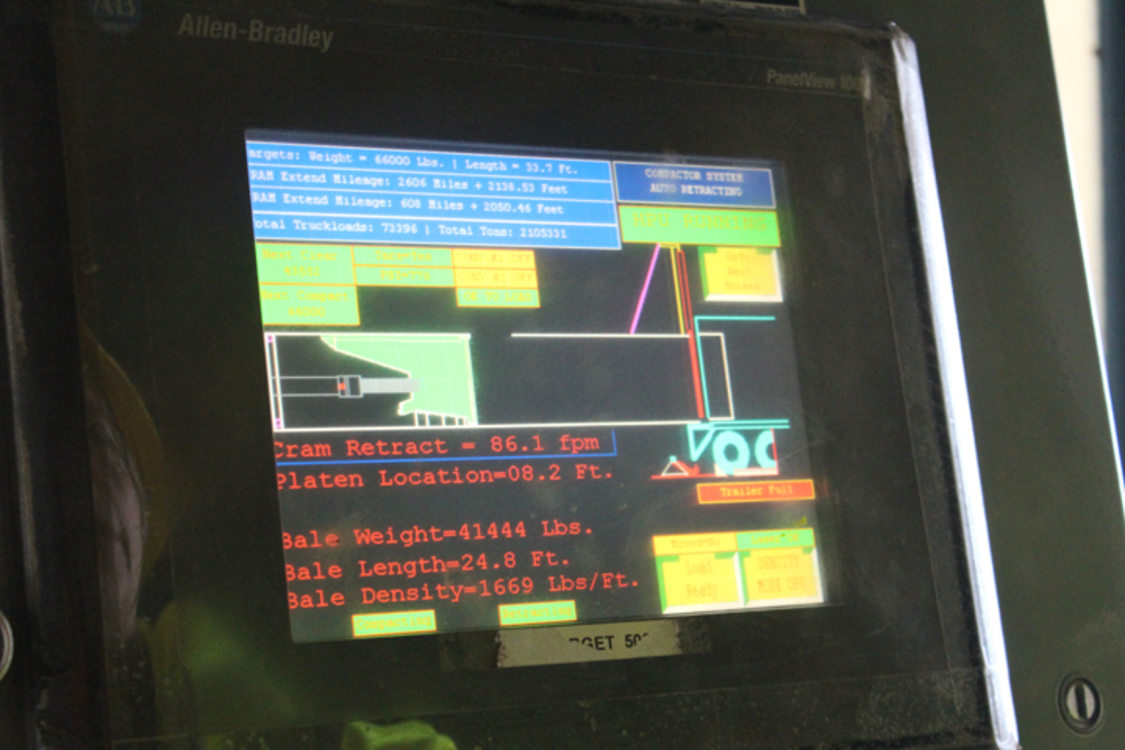 A screen depicts the compactor's location as it crushes garbage into a trailer.

A screen shows the compactor's location as it crushes garbage into a trailer. 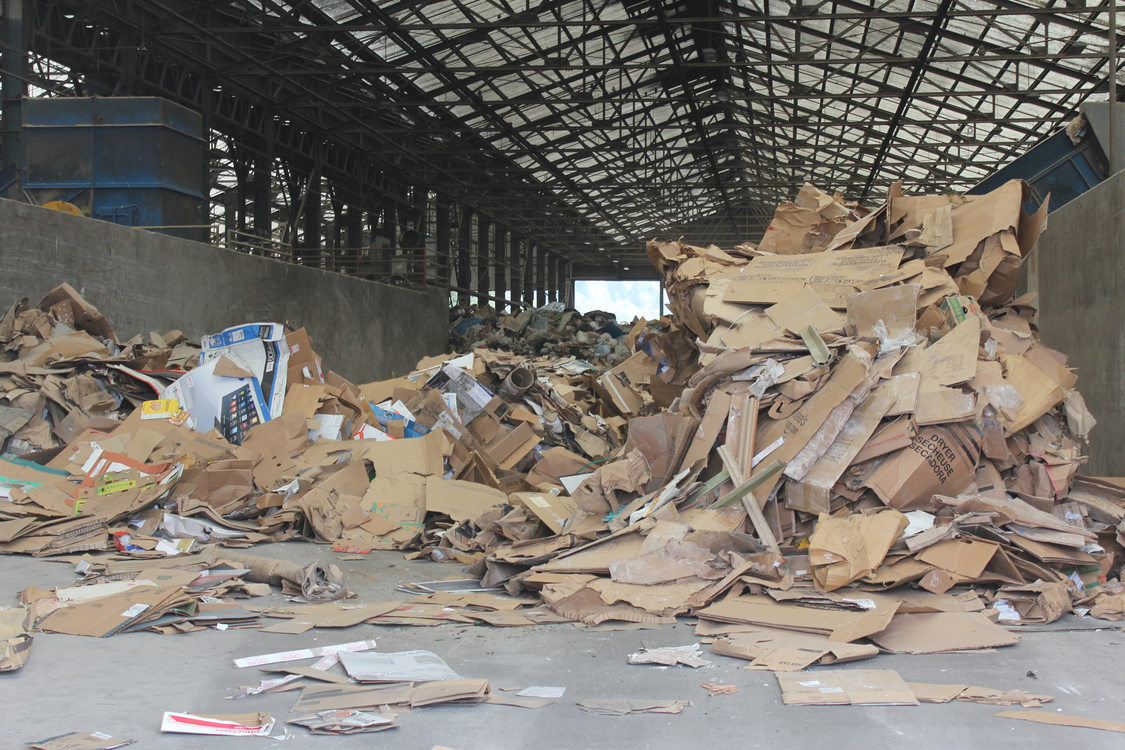 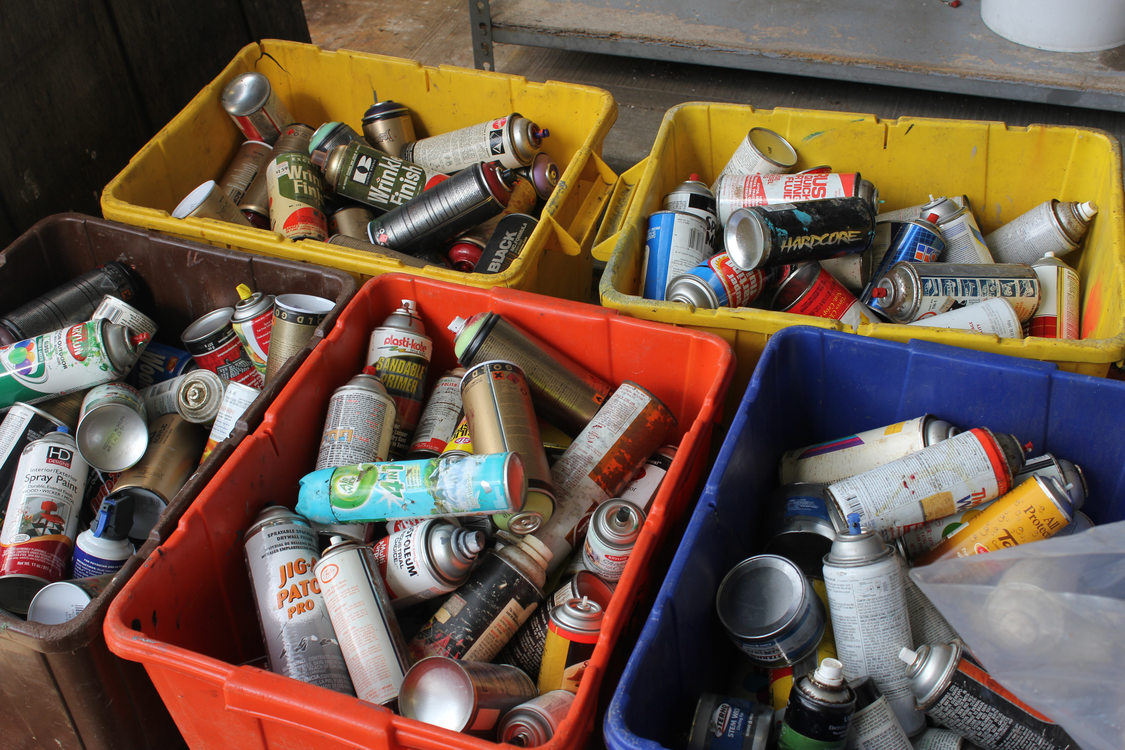 Metro's Hazardous Waste Facility, adjacent to the Metro Central Transfer Station, takes aerosol cans, batteries, pesticides and a range of other garbage that needs to be handled with care. 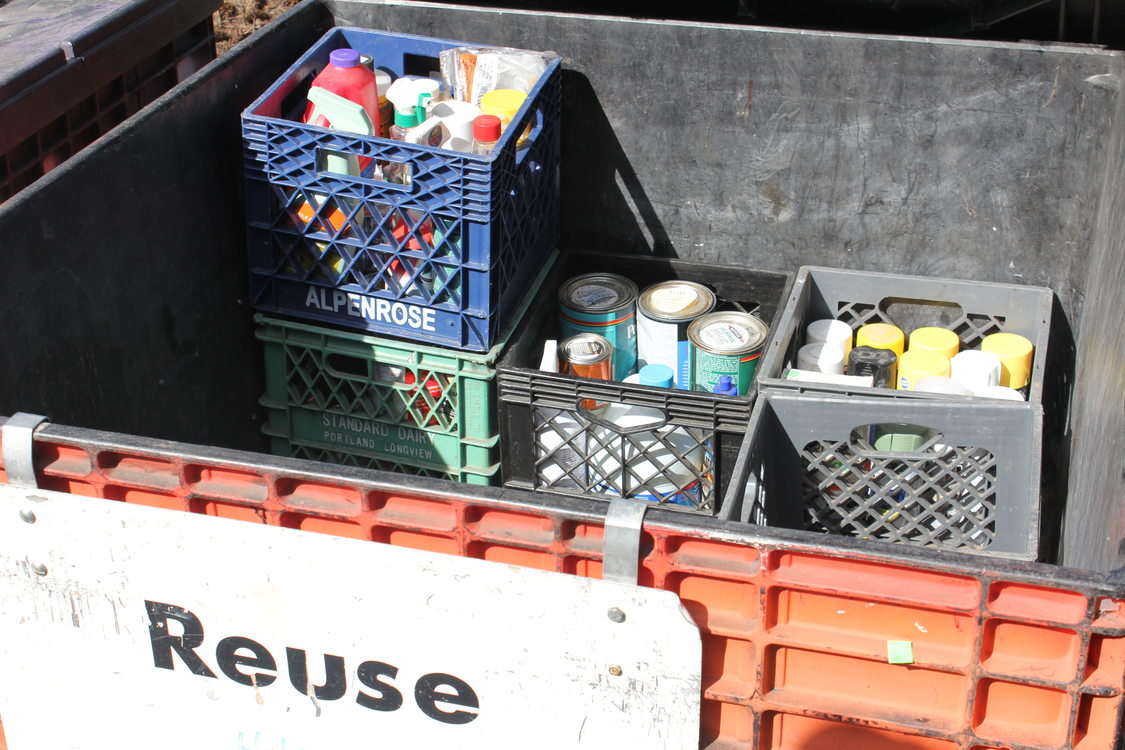 It’s a bright April morning as a pickup truck pulls up to a scale house. Daniel Miller opens the window.

“Howdy, just trash today?" Miller asks. "Any recyclables? Put that in the recycling section and you can get a little bit of money back on it.”

Miller is a scalehouse technician at the Metro Central Transfer Station, the halfway point between stuff people want to get rid of and where it ultimately ends up.

Metro Central is kind of like a sorting line for discarded items. Trash, recyclables and compost are filtered, picked through and sent to the destination most appropriate.

Sometimes, that's the landfill at Columbia Ridge, about 150 miles east of Portland. But a good deal of the stuff brought to Metro Central gets a second life instead of being buried in the ground forever.

Dale Rickert is the president of Decoprop, a property cleanup company that often brings truckloads to Metro Central.

“My attitude on life is, if in doubt, get rid of it,” Rickert said, as a toilet crashed to the ground nearby. “Otherwise, you end up with a cluttered mess of a house.”

Rickert is one of the hundreds of commercial haulers who use Metro Central every week. Their trucks are weighed, checked for cover – uncovered loads pay more – and then sent to a huge, open bay in the metal-clad building. That's where haulers start unloading their discards.

The station floor is littered with everything from mattresses to shingles, broken furniture to mailboxes, railroad ties to Tarot cards.

The dry waste – general trash that's mostly free of yard debris, food or liquids – is picked through by workers and other authorized people for recyclables, or even material that can make art.

What's left is pushed by a front-end loader to another bay, where it's loaded onto a long conveyor belt. Employees from Recology, which operates the Metro-managed transfer station, pick through the trash to look for anything recyclable – wood, wires, glass, rubble, cardboard and more. These items are then dropped into large collection boxes.

Even the building is recycled.

“It’s actually a good a example of recycling itself because the building was a steel mill plant that was constructed for (World War II),” said Penny Erickson, principal solid waste manager with Metro. “But actually the war ended before the plant started production."

The building is busy now. At the end of the conveyor, unsalvageable dry waste drops off the belt into a pile on the floor of Bay 2, where more bulldozers mix the garbage with wet waste - household waste picked up from the curbside - and push it onto another conveyor belt.

This belt leads to a compactor, which pushes the trash into a trailer that will be hauled by semis to the landfill.

“And keep in mind, this is in a region that has a high level of recycling and composting,” he added.

As this garbage has another 150 miles ahead of it to Columbia Ridge Landfill in Arlington, shipping by semi is a far more environmentally and economically attractive option than by traditional garbage truck, Philbrick said.

And so the transfer station is rid of what is deemed real “trash,” but there’s a lot more than that left behind.

“Out of all the discards that are being generated – and when I say discards, it could be garbage, it could be recyclables, it could be organic waste, just whatever we have that we need to get rid of – out of all that stuff, we’re recovering about 64 percent, which is pretty good,” Philbrick said.

Also brought to Metro Central is pickup of household compost and yard debris, and compost and hazardous waste from businesses.

Got remodeling, construction or demolition debris?

Compost is sent to Nature’s Needs in North Plains to be turned into topsoil, and to JC Biomethane, where it can be put through an anaerobic digester and burned to create methane to spin turbines and produce electricity.

Hazardous waste, which can include items ranging from cleaning chemicals to batteries to asbestos, has a process all its own.

Everything that comes in is meticulously sorted to find the best future for it.

Latex paint is sent to MetroPaint, where it is combined and turned into high quality paint that can be reused. Non-toxic substances that are still usable are saved and donated to Habitat for Humanity. Batteries are sorted out to be properly disposed of, empty and full propane tanks go to Universal Cylinder Exchange to be refilled and reused and aerosol cans are emptied and crushed to recycle the steel.

The most hazardous materials are specially handled by trained staff.

When customers are finished, their vehicle is weighed again on the drive out to see how much waste was removed.