Just 15 minutes from downtown Forest Grove and 20 minutes from Hillsboro and Cornelius, Metro has restored a ridgeline with sweeping vistas of the Tualatin River Valley and the Coast Range. 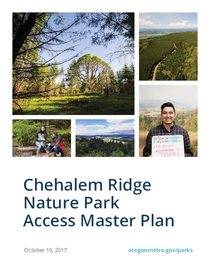 Metro purchased the main portion of Chehalem Ridge in January 2010 with money from the 2006 voter-approved natural areas bond measure designed to protect water quality, wildlife habitat and access to nature for future generations.

The property was formerly owned by a lumber company and before that, substantial areas were farms or orchards. Metro purchased additional surrounding parcels from willing sellers over the years. After a decade of conservation planning, restoration work, park planning, and input and inspiration from community members, Chehalem Ridge has been transformed into a nature park for all to access and enjoy.

Money from the 2006 bond measure and the 2013 parks and natural areas levy was used to acquire land, restore habitat and plan for public access. Planning got underway in early 2016. The Metro Council in October 2017 approved the master plan to guide future visitor amenities. Design, engineering and construction was also paid for with money from voter investments.

At more than 1,250 acres, Chehalem Ridge became Metro's second-largest nature park when it opened to the public in 2021. It provides the region’s residents and visitors access to nature while protecting water quality and wildlife habitat.

Like much of the western Tualatin Valley, Chehalem Ridge rests on the homeland of Kalapuya tribes and bands and the Clatskanie, and others. Chehalem Ridge and the lands surrounding it has sustained Indigenous people from time immemorial, and Indigenous cultures shaped the land and environment.

Chehalem Ridge has five year-round streams that flow to the Tualatin River, which provides drinking water to about 360,000 homes and businesses. It holds multiple habitats – including upland forests, oak woodlands and wetlands – and offers views of the Tualatin Valley.

When acquired in 2010, the land at the commercial tree farm was overgrown with dense stands of Douglas firs. Restoration work since then has strategically thinned the Douglas firs to allow sunlight to reach the ground. Oak and madrone woodland has space to thrive and wildlife is evident all around. Crews have removed invasive weeds and planted native shrubs, grasses and trees.