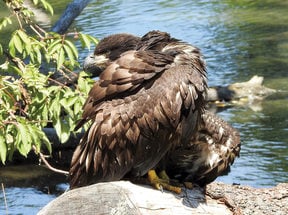 The bald eagle parents feed their chick before the heat wave that hit the Pacific Northwest in June 2021.

Eric Johnson is an avid nature lover and spends time observing its wonders both far from and close to home. He feels a strong connection to his Native American heritage, and through his mother is a tribal member of the Hunkpapa, part of the Lakota Sioux nation.

I was raised to have great reverence for bald eagles. I spend a lot of time observing eagles, and over the last several years I’ve discovered several nests in the Portland metro area. Last spring, a mated pair hatched an eaglet at the Crystal Springs Rhododendron Garden in Portland.

I visited the nest at least once a week, sometimes going up to three times. The eaglet, just a gray feather ball, grew fast.

Dad brought its eaglet squirrels to eat. Mom and the chick played tug-of-war with a fish skin. The youngster began beating its wings. Both parents brought the eaglet squirrels, fish and an occasional duck in an effort to keep the eaglet well fed.

Then, in June, the heat wave hit. The temperature reached 116 degrees. I checked on the eagle family. The eaglet was gone.

The heat had driven the eaglet from the nest. This happened to hundreds of birds of prey in the region. The eaglet couldn't fly, but it somehow made it 75 feet to the ground and then to the park's pond. It drank and cooled off.

With so much human activity around, including people walking dogs, there was a chance the parents wouldn't feed the eaglet. I talked with the park staff who graciously closed that section of the park. Another volunteer and I took shifts watching over the eaglet during park hours. Park staff subbed in on their lunch breaks.

Three days after the eaglet fled the nest, I witnessed one of the parents deliver a fish to the eaglet. There was also evidence the eaglet had been fed a duck.

It was still 90 degrees or hotter. The eaglet would go to the pond and cool off with a bath, then dry off on a nearby log. It explored its small section of the park, eventually settling on a stump as its favorite spot.


The eaglet began short flights of less than 12 feet, once reaching the back of a bench. On day 16 the eagle officially fledged with a 50-foot flight across the pond, where it crash landed on a branch about 15 feet above ground.

The next day it flew into a tree about 25 feet high. The following day, I discovered the youngster in another tree about 40 feet off the ground. Three days after it had fledged, I returned to find the eaglet back in the nest.

It was a powerful sight to see the eaglet, now a fledgling, back in its nest. It had been almost three weeks since the heat wave hit us, and it was clear the eaglet was going to survive.

I returned a few more times to find the fledgling in various trees around the park and across the street at Reed College.

A few days later I got one more look at this beautiful creature before it flew away.

A bald eagle family in crisis, planting 300,000 plants, invertebrates up close and more

Getting eye-to-eye with the tiny creatures that power Oxbow Regional Park.