For many, Columbus Day represents a day of commemoration for the troubling exchange between Christopher Columbus and the Indigenous people of the Americas. Now, many communities, including greater Portland, are reclaiming the day and putting the focus on Indigenous communities.

On Oct. 10, the Native American Youth and Family Center, Oregon Parks & Recreation Department, Multnomah County and Metro hosted the second annual Indigenous Peoples’ Day celebration at the Oregon Zoo. Visitors had the chance to participate in a variety of activities, including storytelling, dancing, crafts and a reception that followed performances.

“Metro recognizes that the public lands that we now manage on behalf of the public are historically ceded and traditional resource lands of the Confederates Tribes of Siletz, Grand Ronde, Warm Springs and Yakama,” Osife said. “It's important for local government agencies to take steps in the right direction to work with, listen to and celebrate the Native American histories of these places.”

Though Columbus Day is still recognized as a federal holiday, reexamining the day means a lot for people like Christine Bruno, who hopes Indigenous Peoples’ Day can one day be acknowledged at the federal level.

“To be able to have something else to call this day, this event – is really wonderful,” said Bruno, who has served on Portland Parks & Recreation's Native American Community Advisory Council. “When our kids were in school, there were always the coloring pages with ships and it was always really hard, so it’s nice to see this transition.”

Now in its second year of official recognition by Metro and the city of Portland, Indigenous Peoples’ Day is an important step for the region in recognizing the Indigenous community, Bruno said. Portland has the ninth largest urban Native American population in the country, with many people living across Multnomah, Clackamas, Clark and Washington counties.

“It’s definitely a step in the right direction,” Bruno said. “Unfortunately, the people that need to learn about it the most are probably ignoring it. Some of the myths and untruths about what this day used to be are still out there.”

This year, organizers focused on including a diverse range of voices at the event by inviting members of the broader Indigenous community, such as the Mexica Tiahui Aztec Dance Group.

“I feel like I get to bridge the Native American and the Mexica communities at a lot of events like this,” said the group’s board president, muralist Rodolfo Redstone Serna. “My family is Mexica, so I work with the Aztec dance community and we have another thriving community here as well, so I try to bring them together as much as possible.”

At the reception, Beaverton Mayor Denny Doyle gave a few remarks regarding Beaverton’s recent resolution in support of Indigenous Peoples’ Day. Beaverton adopted the resolution a few weeks ago to bring awareness to the city’s Native American, Alaska Native and Indigenous communities.

“I think back to the textbooks I looked at when I was in high school and then I look at life that I know now,” Doyle said to attendees. “I’ll be kind – they were not right. They hid a lot of things in so many different areas.”

Metro Council President Tom Hughes also spoke, noting that the region’s residents can’t ignore the fact that the metropolitan area is on land that used to belong to a Native population.

“I think we need to continue to remind ourselves of that we owe that back to the Indigenous people,” Hughes said.

In the past few years, at least 27 cities have adopted measures declaring the second Monday in October as Indigenous Peoples’ Day. Serna says this is a hopeful time of progression for many people.

“If you just think a couple years back, it was Christopher Columbus Day,” Serna said. “That means we’re progressing and hopefully people will start seeing the Indigenous peoples as who they truly are and recognizing us. I think it’s all good. It’s a historic moment.” 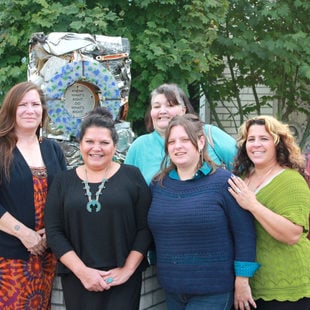