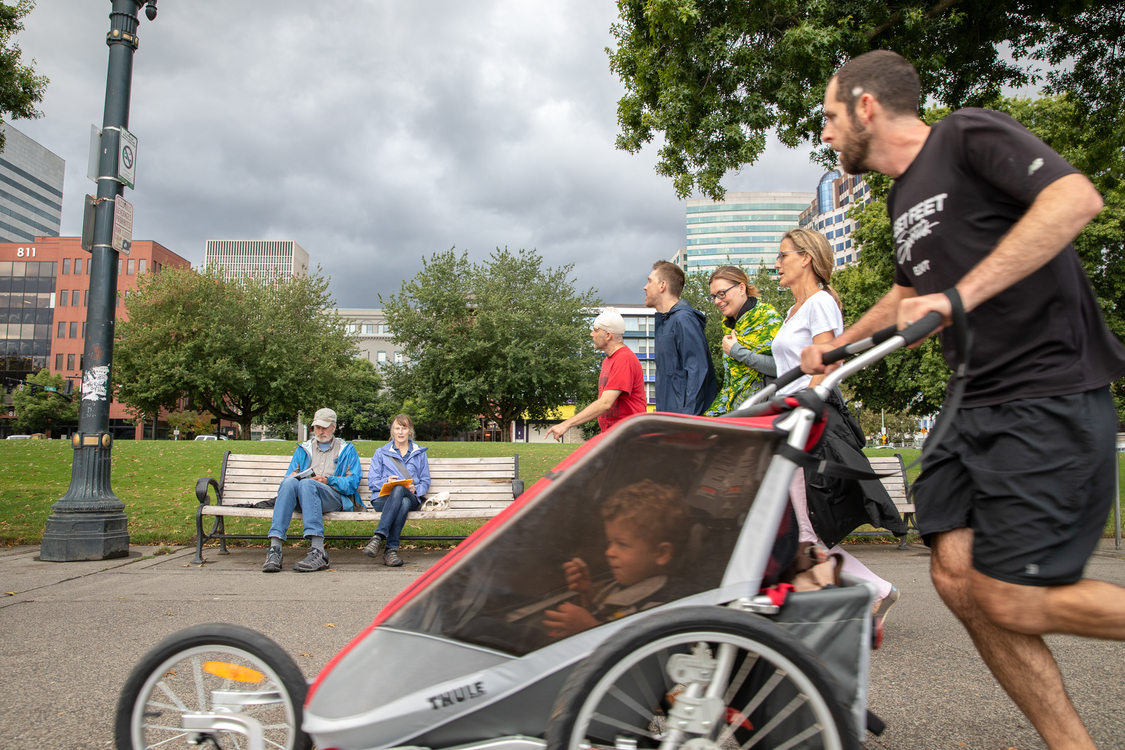 Greg and Elna Otto count cyclists and pedestrians along the Tom McCall Waterfront in Portland as part of an annual regional trail count.

Greg and Elna Otto (left) count cyclists and pedestrians along the Waterfront Park Trail in Portland. They are among more than 200 volunteers that help conduct greater Portland's annual trail counts. 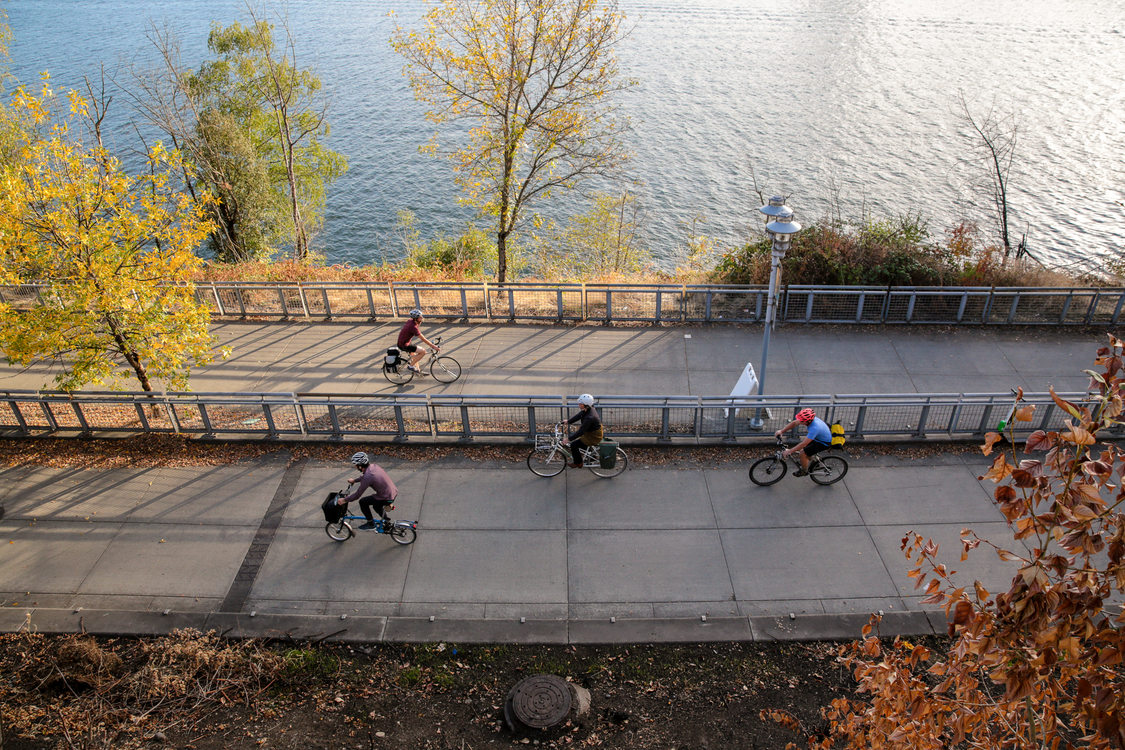 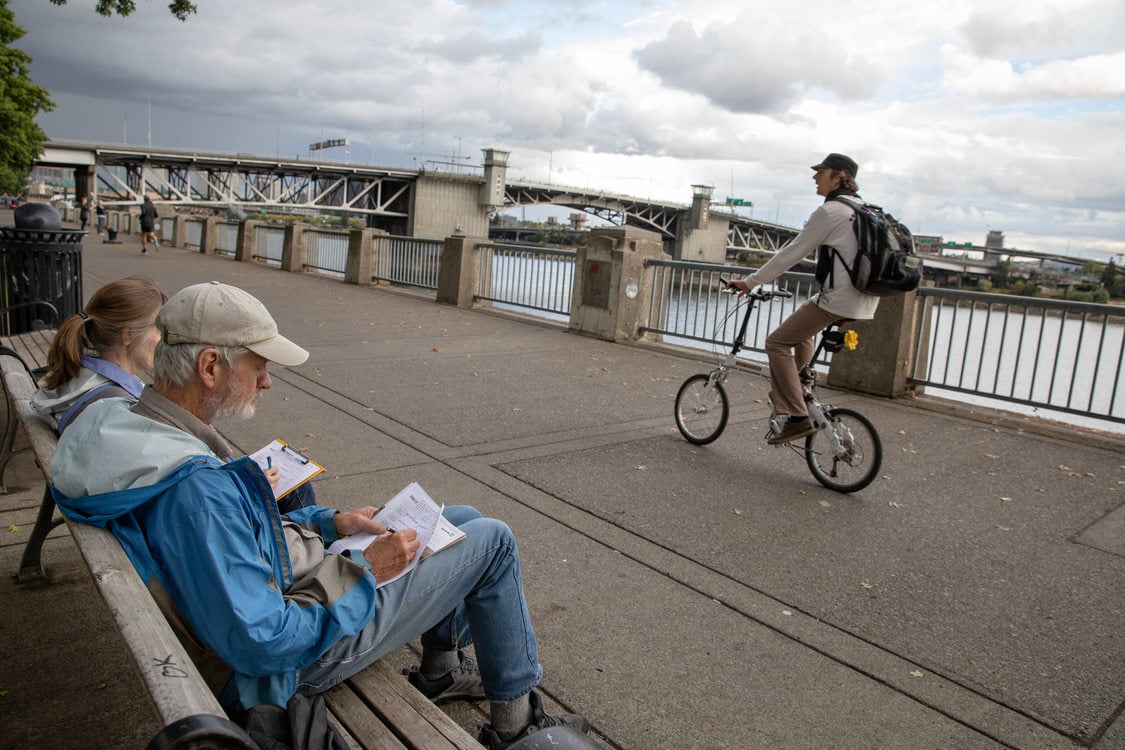 The Ottos have volunteered to help conduct trail counts for the last several years. They like counting on the Waterfront Park Trail because there's typically lots of traffic. This year they saw less action and thought it was likely due to the rainy weather. 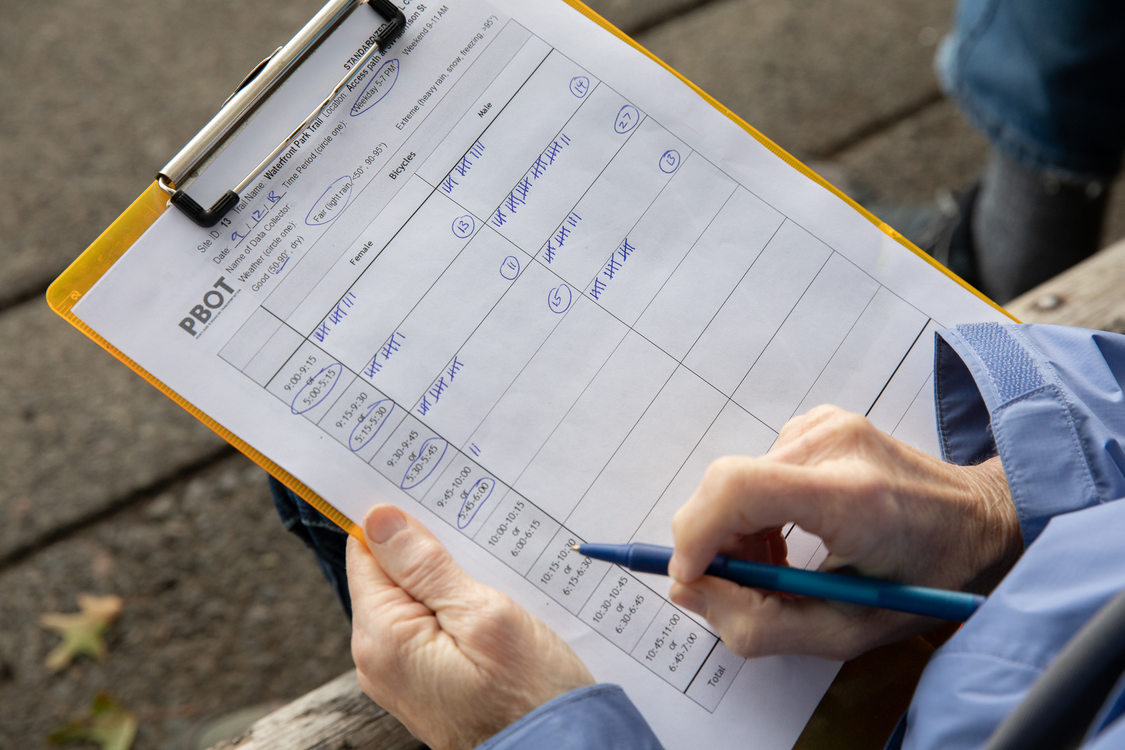 Trail counters can count manually or use a counting app that Metro created. Trail use catagories include bicycles, pedestrians, wheelchair users, and "other," which includes skateboards, scooters and more. 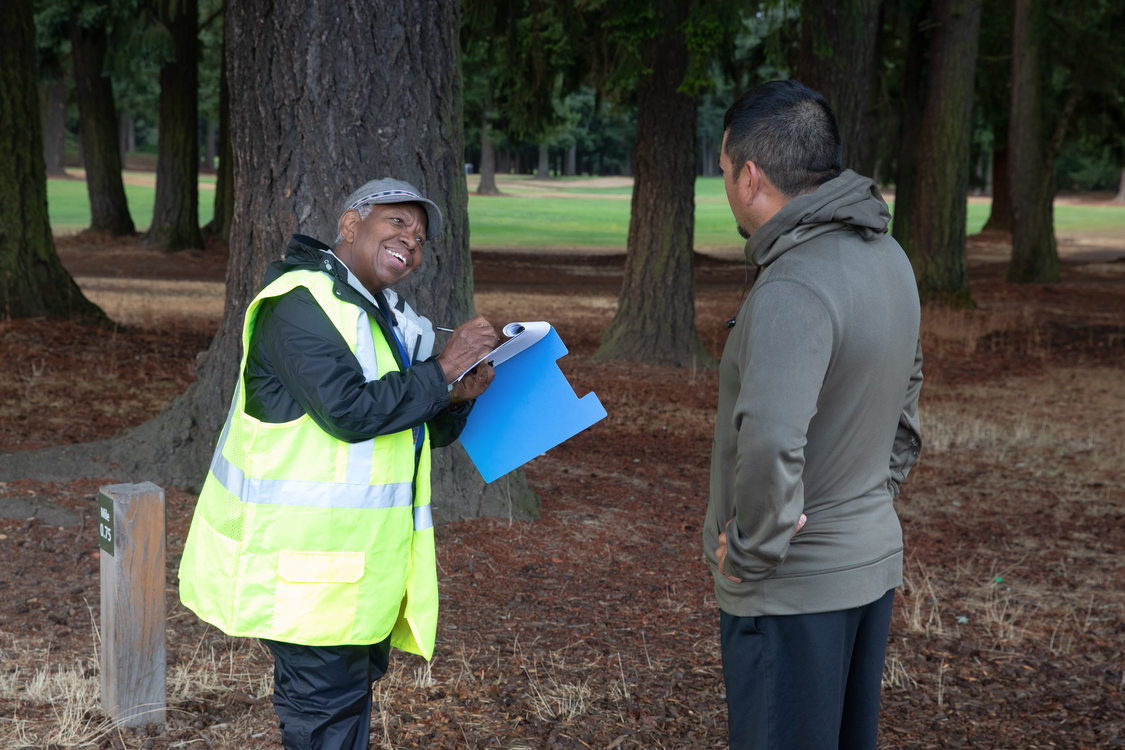 Regina Blake talks with a trail user on the Glendoveer Trail

Regina Blake, retired nurse and veteran trail counts volunteer, surveys a trail user on the Glendoveer Trail. The trail survey gathers demographic information and includes questions like, “What best describes why you are out here today?” and, “Why are you using this trail instead of walking or riding elsewhere?” 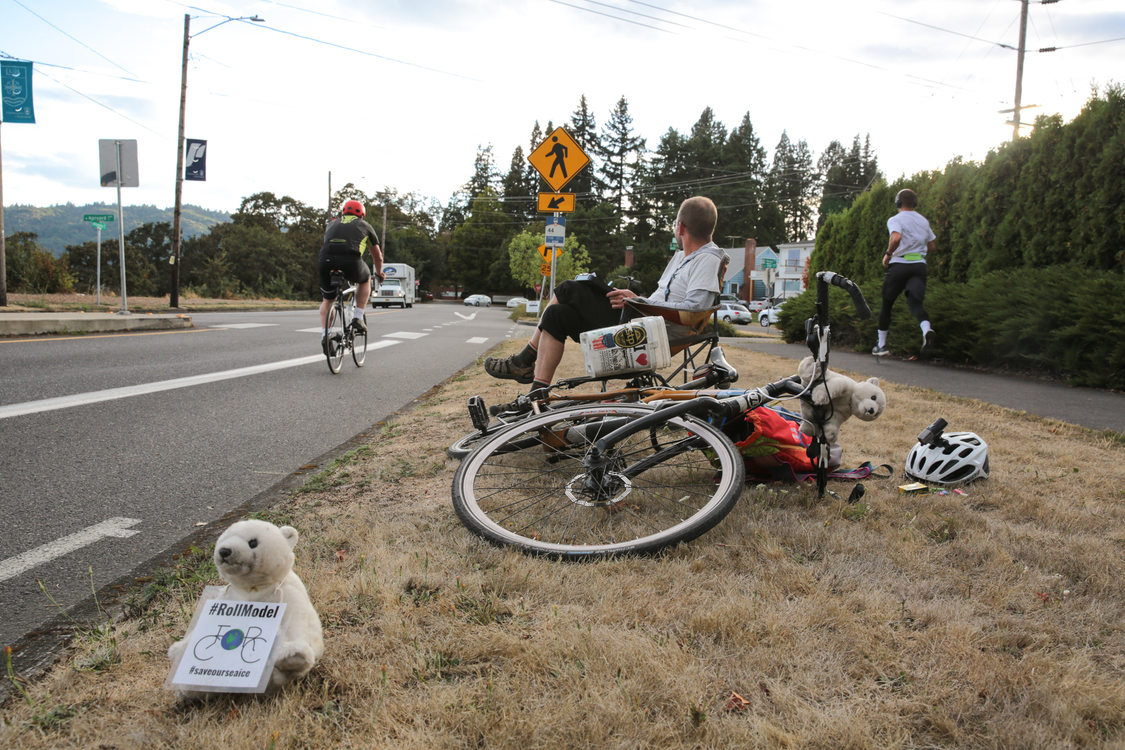 Trail counts volunteer Philip Fensterer (center) is an avid bicycle commuter and former zookeeper. He became an activist for climate change through his work with polar bears and is passionate about using the regional trail network for “active transportation.” 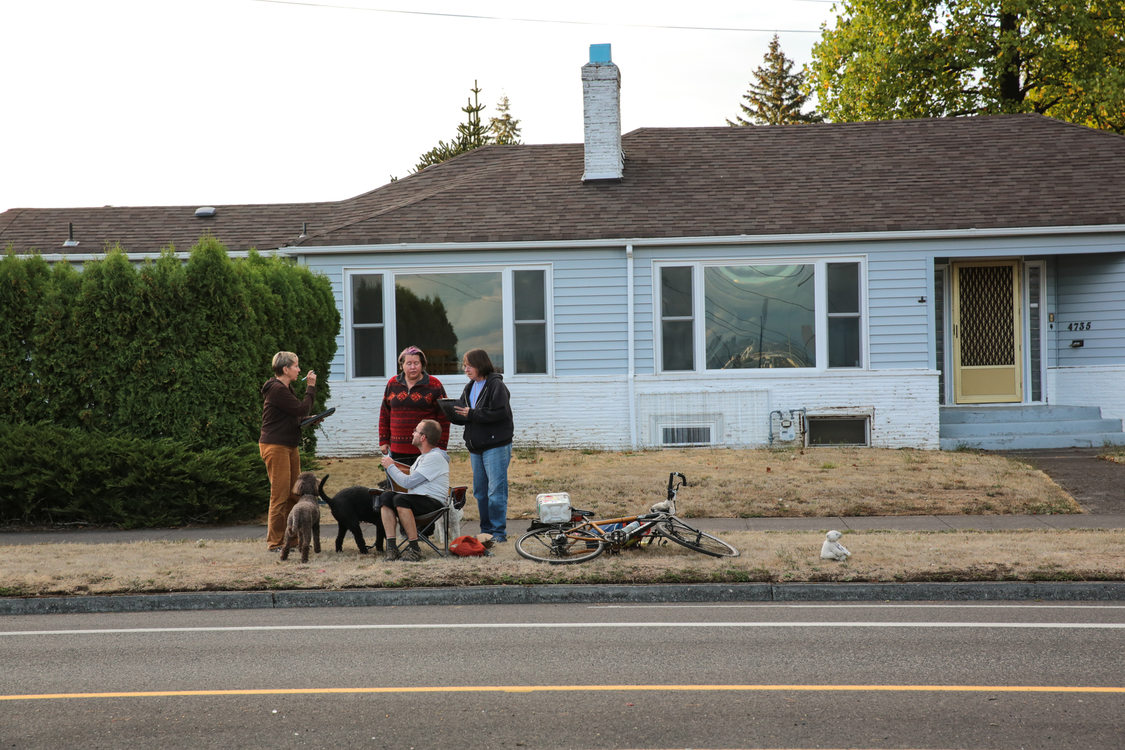 Philip Fensterer speaks to pedestrians on Willamette Boulevard during the regional trail counts. 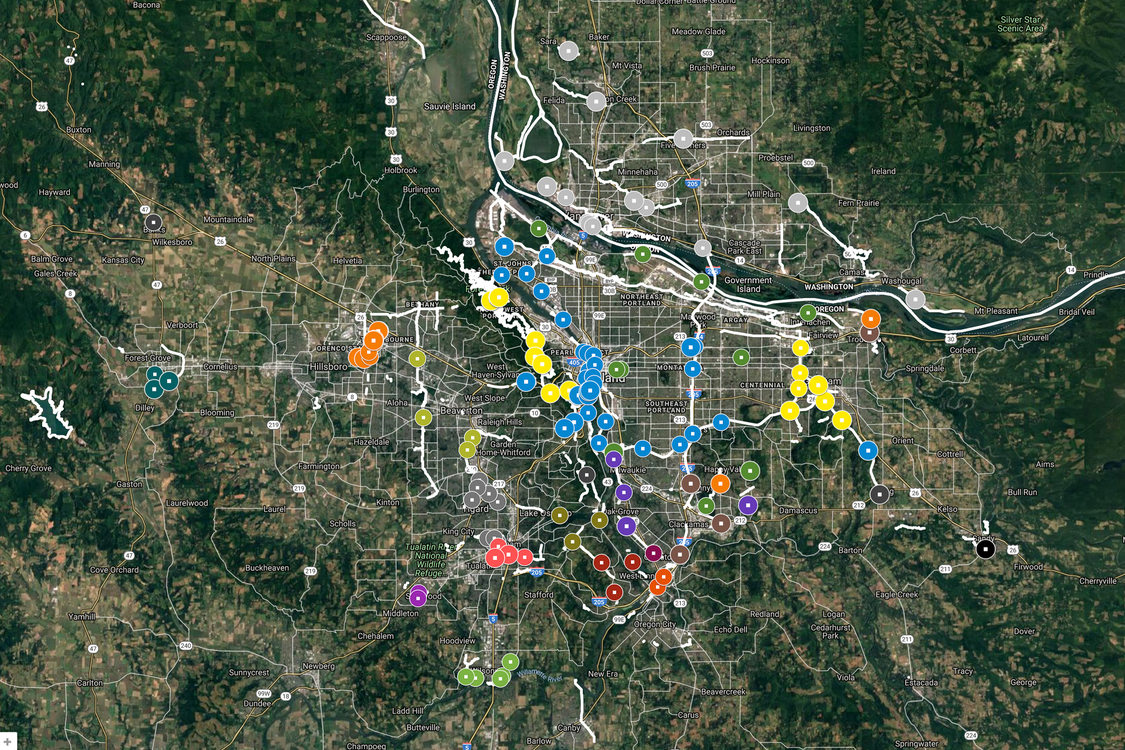 Map of sites where regional trail counts are conducted across greater Portland.

Over the last eleven years, the annual regional trail count has grown from tracking trail usage at 50 sites, to collecting data at 135 sites in 17 cities across greater Portland.

Despite blue skies, Regina Blake, 75, of Gresham, was dressed in head-to-toe rain gear. “Well it is Oregon,” she said.

After a visit to Portland in 1903, pioneer landscape architect John Charles Olmsted proposed a comprehensive system of parks and natural areas connected by parkways and boulevards. Terwilliger, Sellwood and North Willamette boulevards are each part of that original plan.

Olmsted’s idea was revived in 1982 and named the 40-Mile Loop, honoring the original concept’s proposed length. Since then, trail planners and advocates have updated the plan to meet the needs of a much larger metropolitan area and population.

Plans for the 40-Mile Loop now include all of Multnomah County. When it is completed, it will connect more than 30 parks along the Columbia, Sandy and Willamette rivers, Johnson Creek, and the Tualatin Mountains in a continuous 140-mile loop. The section from the Sandy River to the Springwater Trail is the last major gap in the 40-Mile Loop.

At several minutes to 5 p.m. on a fall Tuesday – clipboard in hand and umbrella by her side – Blake was seated on a park bench under a canopy of evergreen trees at Glendoveer Golf Course in Northeast Portland, ready for her volunteer shift. She was one of more than 200 volunteers at 135 sites in 17 cities across greater Portland who spent the week counting and surveying people on trails throughout the region.

Within minutes of starting her count, the sky darkened and it began to rain.

Blake spent the next two hours counting each soggy jogger and walker who crossed the three-quarter-mile marker on the nature trail encircling the golf course.

Every September since 2008 Metro, along with a growing number of local governments including the cities of Portland, Vancouver, Hillsboro, Gresham, Beaverton, Tualatin Hills Park and Recreation District and North Clackamas Parks and Recreation come together to conduct regional trail counts.

“There’s limited funding out there for transportation needs,” said Robert Spurlock, a senior regional planner at Metro. “Traditionally, people biking and walking haven’t gotten their fair share. One reason for this is that there hasn’t been good data.”

The data collected during the annual count – using nationally standardized survey and recording methods – provides insights around demand, usage and opportunities within the regional trail system. The results are integral to securing funds to build, connect and enhance trails.

Metro disburses federal transportation money in support of trail projects across greater Portland through the Regional Flexible Funding program, and grants like Nature in Neighborhoods.

“The counts help us to see what trails will have the most use and can inform planning, design and budget decisions,” Spurlock said.

Regional trail count data also feeds into the National Bicycle and Pedestrian Documentation Project, which measures the positive benefits of investing in these transportation modes nationwide.

Bicycles and e-scooters wizzed by along the Tom McCall Waterfront Trail just south of the Morrison Bridge where husband and wife volunteer duo, Elna and Greg Otto, were counting.

“We like to walk around the city and go on hikes,” Elna Otto said. “We go to Mount Tabor quite a bit and Laurlehurst regularly. I like Powell Butte and we've done the 4T Trail a few times.”

“So many trails, so little time,” she said.

At the busy waterfront site, the Ottos decided to divide and conquer their counting duties. Everyone who passed on foot, bicycle, scooter, skateboard, unicycle, or in a wheelchair had to be tallied.

Trail count volunteers also asked passing trail users to complete a short survey that gathered demographic information and asked questions like, “What best describes why you are out here today?” and, “Why are you using this trail instead of walking or riding elsewhere?” The survey highlights not just who is using the trails, but how and why.

Philip Fensterer perched in a camping chair at his volunteer post alongside Willamette Boulevard, where he waved to cyclists as they passed his count line.

Fensterer, an avid bicycle commuter, was a zookeeper at the Oregon Zoo for 18 years. He became an activist for climate change through his work with polar bears and is passionate about using the regional trail network for “active transportation.” Fensterer rides with a stuffed polar bear holding a “#RollModel” sign on the back of his bike to engage people in conversation.

“The best thing I can do is advocate for getting cars off the road,” Fensterer said.

The growth of commuting by bike or walking and the popularity of outdoor recreation activities like hiking, running, bicycling, skateboarding, paddling and wildlife observation has increased the need for quality regional trails.

Previous regional trail counts show that the number of pedestrians skews slightly female, while male cyclists have outnumbered females 3-to-2. But, Spurlock said, the gap is closing, which suggests an increased comfort and sense of safety on the trail network.

Trails across greater Portland are as varied and unique as the people who use them – from the quiet beauty of Troutdale’s earthen Beaver Creek Trail to the hustle and bustle of Portland’s Vera Katz Eastbank Esplanade. Some, like the I-205 Trail, are well suited for bike commuters seeking a fast route. Others, like the Wildwood Trail in Forest Park, offer recreational hikers a winding lush labyrinth.

“These trails are popular,” Spurlock said. “The overarching message we hear is that people want more trails and they want them to be better connected.”