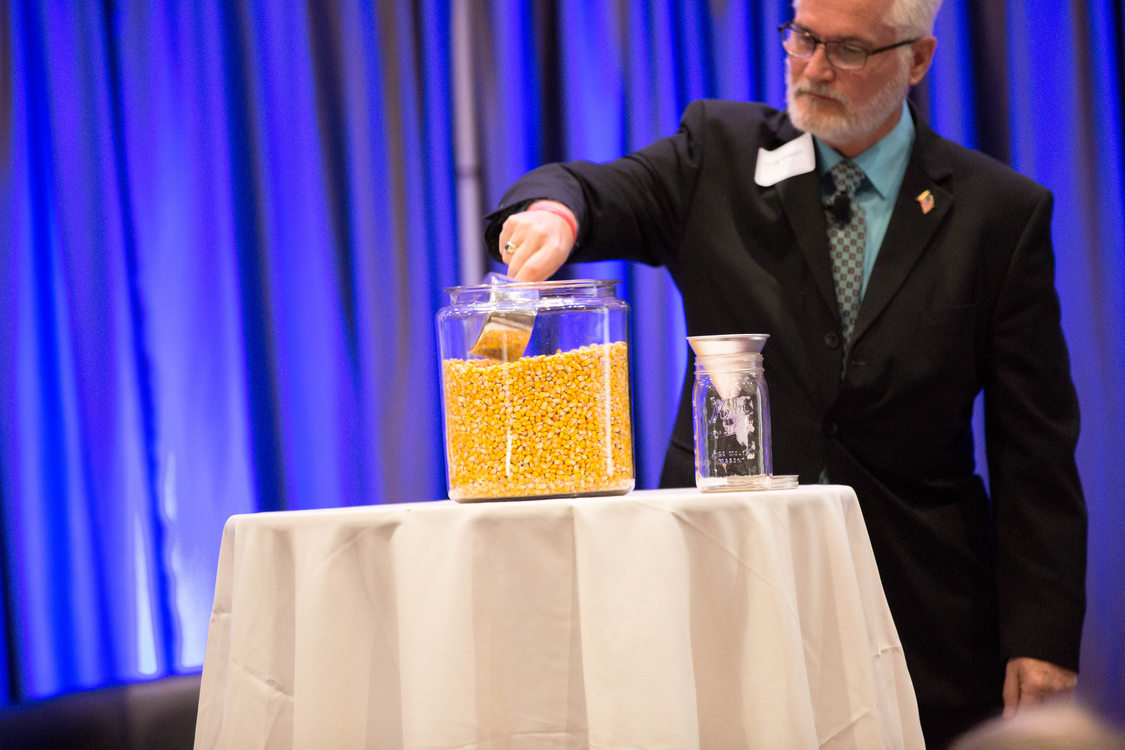 A diminishing jar of seed corn served as a symbol of the Portland metropolitan region's dry outlook for transportation funding at a forum of regional leaders Friday morning, as Metro Councilor Craig Dirksen removed scoops of kernels to represent a lack of money to deal with mounting needs. "Who in this room is satisfied that this is what we've got to work with for the next 25 years?" Dirksen asked. No one raised a hand. 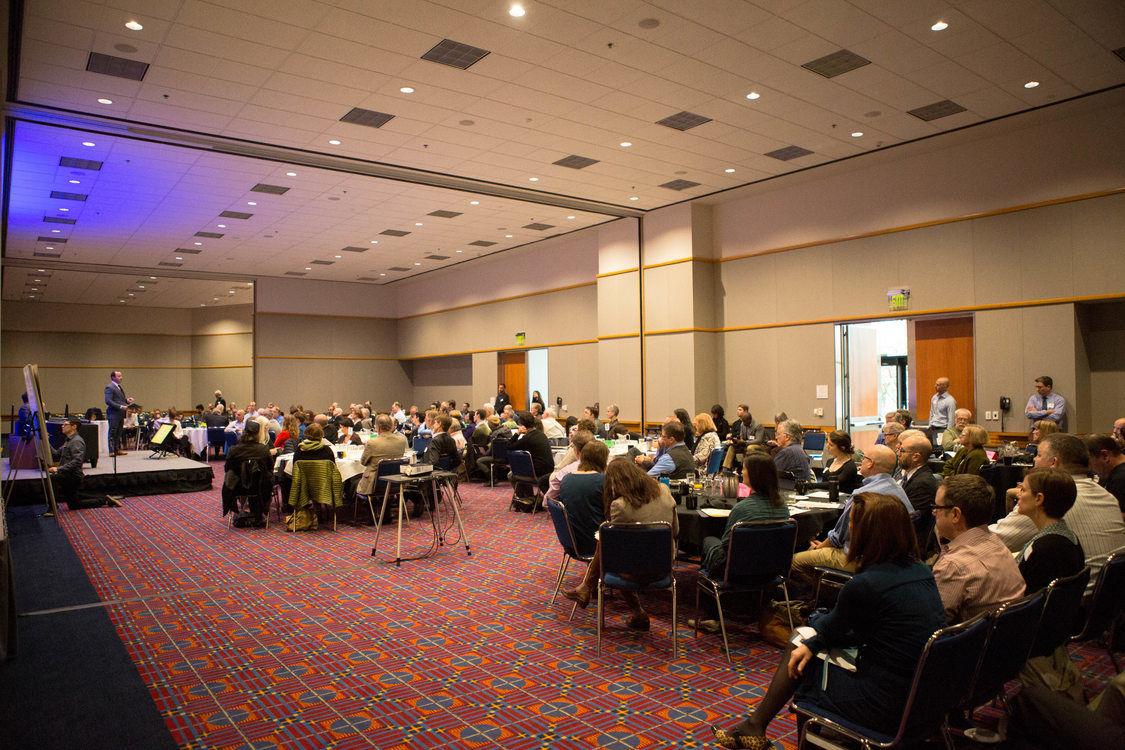 Scores of elected officials, community advocates and business representatives attended the forum Friday, Dec. 2, at Oregon Convention Center. Their mission: Plow into a very bleak outlook for transportation funding, and discuss some possible ways to move forward, likely with less federal and state support than in the past.

A video that was shown to attendees, featuring comments from local leaders and elsewhere about the region's needs and how a regional transportation plan can help.

For many, the topic of transportation funding evokes a dry wasteland of charts, graphs and acronyms.

On Friday, it found new expression: a large jar of seed corn.

Transportation shapes our communities and our everyday lives. Metro, the elected regional government for the Portland metropoltian area, is working with the public and local, regional and state partners to update a shared transportation vision and priorities for the next 25 years.

Metro Councilor Craig Dirksen scooped cup after cup of kernels out of that jar before scores of elected officials, community advocates and business leaders at the Oregon Convention Center.

Finally, with a once-full jar reduced to a few paltry inches of corn, Dirksen stopped scooping.

That, Gertler said, represents what the region has left to allocate – maybe $3 billion for transportation projects over the next 25 years.

That’s $120 million a year, less than half the cost of the new Sellwood Bridge.

The demonstration was part of Metro’s third regional leadership forum in support of a major update of the region’s 25-year transportation plan, which is expected to be complete in 2018. At previous forums, leaders from around the region have discussed big visions, emerging technologies and lessons from other places.

On Friday, the gathered leaders plowed into hard facts of paying for growing needs in an increasingly bleak funding outlook.

His scooping complete, Dirksen raised the nearly empty jar of corn to the room.

"My question is, who in this room is satisfied that this is what we've got to work with for the next 25 years?" he asked.

No hands were raised.

The outlook gets worse: There’s a drought underway. Much of the $31 billion leaders counted on in the last 25-year plan depends on revenue assumptions that either haven't happened or have very questionable futures. These include regular small increases in the gas tax and vehicle registration fees at the state level and federal funding continuing at current levels.

Instead, the gas tax is basically flat at both the state and federal levels – and because of inflation and more-efficient vehicles, it's actually worth less and less each year.

The federal government doesn’t look likely to rain the same amount of transportation funding most metropolitan areas have come to rely on over the years, Oregon Department of Transportation assistant director told the forum a few minutes before the corn scooping.

The current federal transportation bill expires in 2020, and its future is murky at best.

On the campaign trail, President-elect Donald Trump suggested that infrastructure would be a priority for his administration, Brouwer noted, but it may not be the kind Oregon is used to.

Here’s the difference: Funding is like a grant, though it’s often at least partially matched with local or state funds. Financing has to be paid back, often with interest.

That means the region and state should be prepared to raise a lot more money here, or take a new leap into toll roads and other pricing mechanisms. Also, financing tends to work only for big projects, not more mundane but vital things like maintenance, transit operations or walking and biking projects.

"Don't expect salvation from the federal government," Brouwer said. "I think for the most part, states and metropolitan regions are going to have to try to chart their own course and raise their own revenues to backfill this loss of federal transportation revenue."

More from this forum

See materials from this forum, including agenda, discussion guides and the transportation funding presentation, on the Metro event page. Go

Can the Legislature fill the gap?

One option: The Legislature could simply raise the gas tax or pass another funding mechanism. But that's never as simple as it seems.

There's reason for optimism in the 2017 legislative session, said Drew Hagedorn, president of the Oregon Transportation Forum, a coalition pushing for more state transportation revenue. His group, which includes business, environmental, transportation and labor groups, is proposing an as-yet unspecified gas tax increase in the Legislature next year.

Hagedorn said both the governor and legislators have held recent listening tours that revealed transportation is a major concern all over the state. Congestion and transit service are top priorities in both urban and rural areas.

It isn’t a partisan or urban versus rural issue, either. Congestion in the Portland metropolitan region vexes even Oregon's most rural corners, Hagedorn noted, because they depend on reliable freight movement through the state's economic center. Legislators pay attention to that, he said.

"I think we've got an awful lot of momentum toward a package," Hagedorn said. "This is our session to get it done."

But there are also reasons for pessimism about how much the state can help fill the Portland region's transportation gap.

A draft budget unveiled last week by Gov. Kate Brown included transportation as a top priority, but also revealed a $1.7 billion hole in the state budget, in part because of voters' rejection of Measure 97 last month. And legislators might be inclined to focus on education, housing and health care in raising new revenue.

Another reason for concern, at least for some: Automobile and freight advocates aren't comfortable with raising the gas tax too much. They can support a cap of around $300 million on a statewide transportation package, Hagedorn said, with the possibility of referral to voters if it tries to raise more from a gas tax or other user fee.

A call for more seed corn

That wasn’t sitting well with Oregon State Treasurer Ted Wheeler, who will be sworn in as Portland’s mayor in January.

“I’d like to stop us just kowtowing to all these organizations that say, ‘You know, you have a dramatic thoughtful reasonable vision – we’re not interested in that.’ Well, to hell with them,” Wheeler said. “We’ve got a state to run. We’ve got a region that is on its knees as far as transportation funding. Let’s go big. Let’s go to the public and talk about something that’s actually inspiring.”

Wheeler said the $300 million idea was business as usual, and neither he nor legislators would find it sufficient.

"I think we should go big and stop playing small ball, stop being cautious, stop being risk averse and acknowledge that actually we have real transportation funding needs in this state and region that are not being met and will not be met with a $300 million package," Wheeler said. "Frankly, it's a waste of our legislators' precious time and resources to be talking about a $300 million package."

Wheeler urged leaders in the room to develop a bigger transportation vision and organize a coalition that can push it to victory, whether at the ballot box or the Legislature, even if some traditionally powerful groups oppose it.

Metro Council President Tom Hughes shared Wheeler's impatience for small visions, but added that more work needs to be done to prepare a bigger vision and create momentum to pass it with voters.

How to do that groundwork – and apply it to the right priorities – consumed much of the rest of the morning's discussions.

They dug into which of the region's transportation challenges are most urgent, and which funding mechanisms would be most effective to address them – seeking more federal or state revenue, or looking to potential new regional or local funding sources.

Reporting back, table representatives expressed a common difficulty isolating any one transportation challenge as most pressing, because they all are intertwined.

"You can use any one of these as a lens to look at the others," noted Columbia Corridor Association executive director Corky Collier. Collier, along with several others, suggested equity might be the best place to start.

Kelly Haines, senior project manager at workforce development nonprofit Worksystems, Inc., suggested focusing on the opportunities a better transportation system can bring, as it's built and for years to come.

"What type of opportunity will be made available with that funding?" Haines said, pointing out that building a better transportation system means many construction and operations jobs, training opportunities and more. She noted that can improve equity as well.

"It could be something that benefits women and people of color getting into construction, getting good-paying jobs and having training opportunities and career pathways. So not just transportation benefits, but the economic opportunity that results from this activity that then goes back to the community."

Several attendees noted that a big vision with specific projects that serve specific populations – so that as many people as possible see benefit to themselves or their community – has been a common theme of transportation packages that have been successful in other places, including Los Angeles, Seattle and Alameda County, Calif.

But Beaverton City Councilor Marc San Soucie suggested while a good vision is specific and bold, it begins with an inclusive process to see what's important to all communities.

"As an Oregon resident, I would more likely want to pay for something if someone asked me what I needed," Pinzon said.

And while not committing to any specific transportation funding approach going forward, several people urged the room to remember that accountability matters.

In other words, perhaps, you reap what you sow. 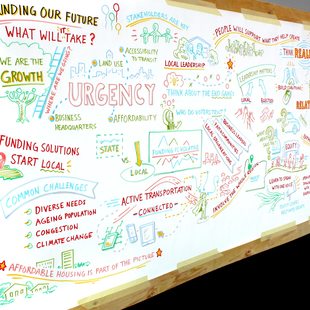 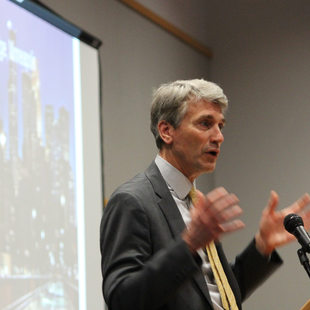