Cameron Johnson first came to Oregon looking for a change in scenery. His hometown of Cheyenne, Wyoming is, he said, “flat, windy, and very cold. The only trees are in like the two parks that are there.”

He settled in the Albany-Corvallis area, and enjoyed the time he spent exploring his new state. But soon, the move sparked a desire for bigger changes. That drive led him to Oregon Health & Science University, where he later joined a Metro-sponsored program for entry-level employees seeking careers in healthcare.

Cameron’s wife, an immigrant who hails from Rio de Janeiro, Brazil, longed for life in a bigger city. She missed the energy of city life, as well as the amenities.

“She told me she needed to live somewhere with at least a bus line,” Cameron said. “So I said, ‘fine, get a job in Portland, and we’ll move there.’ Well, I put my foot in my mouth real quick.” It wasn’t long after that conversation that Cameron’s wife came home one day and announced that she’d gotten a job at the courthouse.

Until then, Cameron had been working in logistics and distribution for various companies. He was happy to have work, but he wanted to be in a field that had a greater mission.

“I wanted to help people more than just, you know, a CEO's pocketbook,” he said, “so I thought the change to health care would be the route to go for that. I wanted to have that better feeling of self when I got home in the afternoon, knowing that I was actually helping a person instead of just a production line. So that was one of the big things for me when I came to OHSU.”

“It opens up so many more avenues just to be able to get ahead, maybe even buy a house one day instead of just rent.”

He has worked there now for almost two years. Shortly after he started, Cameron learned through his union, the American Federation of State, County and Municipal Employees, about a partnership between OHSU and Immigrant & Refugee Community Organization that would allow him to learn new skills and pursue a new path.

A representative from AFSCME, he said, “encouraged us to apply, telling us about a similar program they had run the previous year called the Northwest Promise, and they said, if you want to change your career, make sure you apply.”

The program, known as Promise for the Southwest Corridor, identifies lower-wage individuals in entry-level jobs at OHSU and trains them for healthcare roles in which there is a critical need for new workers. Cameron is now training to become a pharmacy technician. The program also offers training for patient access specialists and sterile processing technicians.

Demand for qualified employees in these areas is growing, and this is what makes the program a life-changing opportunity. OHSU will transition successful participants into paid positions where they will receive continuous training, and the potential for growth comes with an immediate wage increase. “Even starting out, it will be a roughly 7% or 8% boost,” said Cameron.

Metro supports this program as part of its Southwest Corridor Equitable Development Strategy. This geographical connection to where he lives is part of what drew Cameron to the program. He lives in Hillsdale, and values having an easy commute to OHSU.

“It’s about trying to get that work/life balance for me,” he said, noting that “taking the bus out to Tigard, for example, at 5 p.m., it can take an hour and a half.” That would add hours to his workday, and Cameron doesn’t want to spend all that time just sitting on a bus. “But trying to stay closer without spending too much money,” he pointed out, “isn’t always the easiest thing.”

Cameron’s new career will allow him and his wife to continue to live close to their workplaces. It also offers more job security. According to the U.S. Bureau of Labor Statistics, the demand for pharmacy technicians is projected to grow 7% from 2018 to 2028 — faster than the average for all other professions.

“This program shows Metro and OHSU’s dedication to helping people who might not have all the resources available to them, but who want to stay in the area,” said Cameron.

“It opens up so many more avenues just to be able to get ahead, maybe even buy a house one day instead of just rent.” And that, he said, is even more than he hoped for when he moved to Oregon. “I thought I would drive a forklift for the rest of my life, but then I decided to pursue this healthcare experience, and things have completely turned." 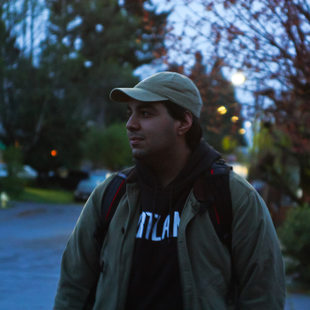