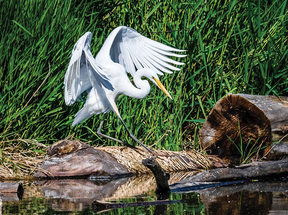 Vivek Shandas, the essays author, stands at an asphalt-filled corner in inner Southeast Portland. Neighborhoods like this can be 25 degrees hotter than shady neighborhoods. (Photograph by Fred Joe.)

Vivek Shandas is a professor of climate adaptation and director of the Sustaining Urban Places Research Lab at Portland State University. Through his research, teaching, and community service, Professor Shandas supports the creation of built environments that align with ecological dynamics and center social justice.

I'm helping my father find a home in Portland. As a recent widower, he’s looking for a small, single-family residential home. As an octogenarian, a single-story he can easily move about is important. As a recent arrival to the Portland region, he wants to be in Northeast Portland, near me and my family. As somebody who immigrated to the United States over 40 years ago and mostly lived in suburbs, he insists on having a backyard.

While all of his requirements seem reasonable, the one I cannot understand is his insistence on having a backyard. Our debates revolve around whether he will spend time in the backyard, if it’s practical given his ambulatory challenges, and whether it’s a priority given all the other needs and the limited supply of available homes during the ongoing pandemic. A backyard, to me, seems like a trivial feature since local parks can offer opportunities for outdoor time and connections to nature.

Why, I ask him, is a backyard such an important space?

My father’s love for the backyard is no accident. He grew up in India, where such personal outdoor spaces rarely exist in dense cities. The same was true in the United States not too long ago. In fact, before the 1950s, a backyard in any U.S. city largely served practical purposes, including food production, livestock, storage – it’s where the outhouse sat. It was a farm in miniature, not a garden refuge. When indoor plumbing, refrigeration and appliances began to fill homes, and larger grocery stores showed up, the role of the backyard transformed.

Throughout the 1950s and '60s, carefully crafted messaging suggested that a backyard is more than a physical space: It’s an emblem of middle-class success. Ad campaigns still offer these messages, reinforcing the importance of finding leisure, recreation and family life within a backyard. Fencing, lawn fertilizers, barbecues, patio furniture and a host of other products are sold as the tools to create backyards that support a wholesome life.

The backyard offers a fresh breath. It can even offer a feeling that transcends our immediate thoughts and strengthens our relationship to nature.

In many ways, the backyard reflects a love affair with virtue and freedom – hallmarks of American rhetoric. The backyard is quintessential to the marketing of the American Dream. It’s part of what my father and many in his social circles accepted as symbols of achievement and having arrived at a better life than the one he left in Asia.

There’s a lot of meaning in those few hundred square feet behind his ideal home. Even beyond the perceptions of social class and virtue, the backyard offers a fresh breath. It can even offer a feeling that transcends our immediate thoughts and strengthens our relationship to nature.

Yet in looking for homes, and despite our arguments about his need for a personal outdoor space, I’ve quickly come to see that the quality and distribution of backyards mirror long-standing policies that have shaped many of our cities across the United States.

As a professor and environmental consultant, the search for my father’s home has raised questions about whether a simple feature of the outdoor space is also emblematic of the systems of land allocation that privilege some above others.

What created such inequities in the availability of personal outdoor spaces within and across the neighborhoods? How are those past wrongs leading to harm today? Could the areas with bountiful backyards help reduce the pernicious effects of climate change?

As I looked into the areas with more and less backyard space, I observed that areas of greater Portland with historically little investments indeed had less available backyard space and also fewer (and smaller) parking strips where trees and other large vegetation could be planted. Upon digging further, I observed that age-old urban planning policies, even some officially rescinded by the civil rights acts of the 1960s, are still in play today.

The most obvious and well-documented example of our planning system privileging specific neighborhoods is the federal codification of neighborhood-based segregation practices, commonly known as redlining. Starting in the 1930s, redlining began as a means for defining risks for federally backed mortgages during the Great Depression. The program generated hundreds of city maps that delineated neighborhoods as “hazardous” or “definitely declining” and others as the “best.”

The difference between a neighborhood marked blue or green for good, and qualified for federally backed mortgages, and one marked red for bad, and disqualified from those mortgages, was who lived in each. White, wealthy residents lived in the green and blue neighborhoods, while the redlined neighborhoods were home to people of color, low-income white people and immigrants from southern and Eastern Europe.

Turns out that redlining and other racist housing policies led to lower land values in those neighborhoods. Houses were built on smaller lots with smaller backyards. Industrial sites, big-box stores and major highway projects took advantage of the low land prices.  Those land-hungry developments created landscapes of asphalt and concrete, reducing opportunities for greening these neighborhoods.

As a region, we can do much better to address historic inequities while making our home more resilient to climate change. A strategy of creating or preserving a wide array of green spaces may be an answer.

As our region faces the twin crises of houselessness and affordable housing, our collective task will be to develop novel approaches that enable greater and more affordable densities while also supporting more trees, green spaces and parks.

A year after the 2021 “heat dome” that killed over 100 Oregonians and over 1,000 people in the Pacific Northwest, green spaces are an increasingly precious line of defense against the effects of climate change. During that extreme weather, air temperature in neighborhoods with bigger backyards were 25 degrees Fahrenheit cooler than those with little or no backyards.

As our region faces the twin crises of houselessness and affordable housing, our collective task will be to develop novel approaches that enable greater and more affordable densities while also supporting more trees, green spaces and parks. Yet, one already clear challenge is that the same areas that were historically disinvested – and thus remain less costly and have fewer resources to, rightly or wrongly, oppose new developments – are now undergoing a proportionally greater transformation into higher-density housing.

One approach is increasing the diversity of green spaces in neighborhoods seeing an increase in housing density. Using diverse types of greening is a proven method for absorbing the sun’s radiation during summer. Outside of investments in parks – small and big – we need to also consider green spaces like green walls, ecoroofs, pea-patches and roadways that support more street-scale plants in parking strips, pocket parks and bioswales.

An immediate solution is identifying the scattered, undeveloped and unintentionally green tax lots within the region’s historically disinvested neighborhoods. By whatever accidents of history, these lots were never filled in. There are hundreds of disinvested lots across the region, for example, that contain large trees. With the right investments, these are potential parks and community gardens – green treasures in increasingly dense neighborhoods.

Metro’s 2019 Parks and Nature Bond will invest almost half a billion dollars to protect and restore land and center criteria to address racial equity, community engagement and climate change goals.

The bond added all of greater urban Portland to the areas where Metro can spend up to $155 million to buy land that supports natural areas. While laudable, only a few of these urban natural areas are where people who face the most acute impacts from climate change now live. The bond also provides $92 million to the region’s 27 park providers to purchase land and direct investments into urban areas. This is a chance for the region to turn its attention to create urban green spaces where they are lacking instead of adding to the greenery of already-green spaces.

To support the centering of the racial justice goals of the bond, we also need planning tools that integrate our understanding of race with reducing climate impacts and promoting economic prosperity. Relevant tools are beginning to appear, including King County’s Equity Impact Review Tool, California’s Cal EnviroScreen, and the federal government’s Justice40 Initiative. Our own recently passed HB4077 will help to create such a tool for Oregon, which is a first step to addressing historical environmental injustices.

We are reckoning with the systems of investment that continue to amplify racial injustices. We are also at a turning point of climate change and the severity of its impacts for the region. These two issues are part of my search for a house for my father. His desire for a backyard may turn out to create a climate refuge that supports the whole neighborhood. Everyone and every neighborhood deserves these refuges. We need to see a region where anyone looking for a place to live can escape into their nearby green spaces, whether small, large, high, low and all different kinds.