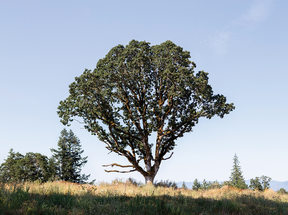 Fire, particularly fires started by people, have shaped the Willamette Valley’s ecosystems since time immemorial. Indigenous people in the region use fire to cultivate and harvest first foods like acorns, tarweed seeds and many others. The regular fires helped create the oak woodlands and savannas that covered the region when white colonists began arriving.

Those people-lit fires along with lightning-created fires also played a role in reducing fuel buildup like dead grass, plants and trees, a benefit that has become more evident as massive wildfires become ever more common.

At Graham Oaks Nature Park in Wilsonville, staff are “trying to make up for the absence of fire on the landscape,” says Andrea Berkley, a natural resources scientist at Metro.

Metro acquired the area that is now Graham Oaks Nature Park in 2001 using funds from a voter-approved bond measure. At that time, it was mostly farmland. Before that, the area contained a diversity of habitats – particularly Oregon white oak savanna – that relied on the presence of fire to thrive.

Over the years, Metro staff have been restoring and managing the landscape, both to create healthier habitats and to reduce the risk of catastrophic wildfire. At a few other natural areas in the region, Metro has used controlled fires, called prescribed burns, as part of the restoration toolkit. But because of the neighborhoods nearby, prescribed burns aren’t a preferred option at Graham Oaks.

“Fire is a management tool,” says Berkley. "There are times when we use fires to manage prairies and savannas, but at this site we look to other tools in our toolbox.”

Instead, staff are removing invasive species, like Himalayan blackberry, that provide quick fuel for fires, and planting native trees, grasses and flowers in their place.

“We have a lot of different techniques to reduce fuels like grass,” says Adam Stellmacher, a lead natural resource specialist at Metro. His team partners with Berkley to care for the park’s landscape. “We’ve hired farmers to cut, bale and remove hay in the open savanna areas between planted trees and pathways, which reduces fuels and thatch on the site and allows flowers to grow.”

And, although it may seem counterintuitive, staff are cutting down trees in strategic locations to help improve habitat health in addition to reducing the amount of fuel available if there were a wildfire. This includes creating fuel breaks near homes and thinning past plantings that have become overly dense.

Trees that were planted 15 years ago are now “20 feet tall and crowding each other, which will lead to many dead trees. If they’re thinned now, they’ll be healthier, more resilient to climate change, and more resistant to pests and disease,” says Berkley.

Thinning out trees also provides space for a diversity of habitats. For example, despite their beauty and iconic status, too many Douglas firs can be too much of a good thing. They grow quickly, and in the absence of wildfire or active management, they crowd out the light that forest floor shrubs and flowers, or slower growing Oregon white oaks, need to survive.

Oregon white oaks, which are significantly reduced from their historic numbers in the Willamette Valley, are an important part of a fire-resilient and ecologically diverse landscape. With deep root structures and thick bark, they’re resistant to wildfire. When they are killed by fire they often re-sprout, and first form a shrub, but eventually return to tree form, providing important habitat for a number of species. The gaps between trees in oak savannas – habitats with prairie between widely spaced oaks– help provide a natural fire break, especially when those areas are managed to reduce fuel.

“We’re making sure that fire burns in a mosaic where there are openings like meadows or areas that have been managed before. If there’s a fire, it won’t be carried to its most extreme,” says Stellmacher.

All of this work is possible because voters in the greater Portland area have made investments to protect clean water, restore fish and wildlife habitat and provide opportunities for people to experience nature close to home.

Big bears and teeny chipmunks are our best known hibernators, but lots of other animals curl up tight for the cold months.

Get out and explore nature.