A steering committee for a rapid bus project between Portland and Gresham will wait a little longer before making a final recommendation for a route and station locations.

Meeting at an East Portland church Monday, 11 of 17 members present were ready to recommend a route that would largely follow the route of today's 4-Division, with roughly three stations a mile.

The committee was asked to recommend a mode, route and general station locations as a step in approving what's known as a locally preferred alternative, or LPA, a key milestone in obtaining a $100 million federal grant for the $175 million project.

The proposed project, known officially as the Powell-Division Transit and Development Project, is for the first bus rapid transit line in TriMet's system. It would use longer buses that stop less often, board faster and use traffic signal technology to provide a faster, more reliable trip than today's bus when it opens in 2021.

Although most committee members said they were ready to move forward, four members said that concerns over housing and economic development in the corridor – though not technically part of the transit project – would likely lead them to withhold support, unless they can get firmer commitments to advance and fund other local housing, transportation and economic plans, particularly in East Portland and the Jade District.

Meanwhile, several east Multnomah County representatives expressed renewed support for the project moving forward. They cited discussions with TriMet and Metro over recent weeks that have resulted in a nearly-finalized agreement to improve local bus service to Mt. Hood Community College in Gresham, since funding limits will prevent the rapid bus line from extending all the way to the campus.

Planners have also proposed adding five stations to the project – four in East Portland and one in inner Southeast Portland – in response to concerns about stations being too far apart for some riders. With the new stations, roughly 85 percent of today's 4-Division riders will access the new rapid bus line at the same place they get on and off the bus today.

Most of committee ready to move forward

When the time came Monday to raise colored cards as a way of gauging support for the project moving forward, most committee members were ready to lift green cards of support.

Some members acknowledged the project they were approving was smaller in scope than what many had hoped for – but said the benefit was still worth it.

"I think it's hard not to feel that there's been a loss because of the very lofty place that we began, but I still view it as a gain," said PCC Southeast president Jessica Howard. "It's a big investment in East Portland and so I must support it."

"I think that on the whole this is a really important milestone and has strong impacts for not only physical mobility but I think economic mobility as well," said Mt. Hood Community College board member Michael Calcagno. "It would be a huge disservice not to go forward with it."

Multnomah County Commissioner Diane McKeel agreed – but added there will be more work ahead.

"I think that we have through this group opened up a lot of discussion and I feel like there will be much more discussion to answer people's concerns," McKeel said.

The red-card members acknowledged that many of their concerns are out of the specific scope of the locally preferred alternative for the transit project – and that some of the issues had been addressed in other local and regional plans and policies. But they pushed for stronger local commitments nonetheless.

They also sought additional assurances that East Portland would receive reallocated service hours freed up by discontinuing existing 4-Division service once the rapid bus line begins running. TriMet has stated that they will reinvest the hours in the Powell-Division corridor, creating the ability to improve north-south and other important connections in East Portland and Gresham, but they will not decide how to allocate those hours until a public process occurs in a couple of years.

"I care a lot about transit," said OPAL associate director Vivian Satterfield. "So I take no joys in putting up a red card for a project that delivers more transit to our region."

But Satterfield said she felt planners had not been forthcoming enough with data and information about the project, and added that she doesn't see a strong enough commitment to improving sidewalks and other transportation in the corridor.

Lori Boisen, representing Division Midway Alliance, called for a better commitment to affordable housing, community members on the decision-making committee for the next phase of the project and mitigation for businesses affected by the transit line's construction.

"We do need better transit," Boisen said. "But we need to make sure that East Portland is not run over."

Representing the Asian Pacific American Network of Oregon, Raahi Reddy suggested her organization might be moved away from opposition if it could have stronger commitments to affordable housing and economic development.

The committee's recommendation does not have to be unanimous, Metro Councilor Bob Stacey, co-chair of the committee with Metro Councilor Shirley Craddick, said agency staff should take a couple more weeks to try to address the dissenting members' concerns and hopefully move their red cards to yellow, or even green.

"I want this to be closer to consensus than we are today," Stacey said.

Metro project staff said they are now working to set up more meetings to discuss the dissenting members concern and seek solutions.

The committee will next meet Nov. 7 to hear how those discussions went. At that meeting, they'll learn more about the feasibility of the two bridge connection options to downtown Portland before making a final recommendation on a route (including the bridge) and general station locations for the project.

Their recommendation would then advance for consideration by leaders at TriMet and the Oregon Department of Transportation, Portland and Gresham city councils, Multnomah County Commission and the Metro Council. 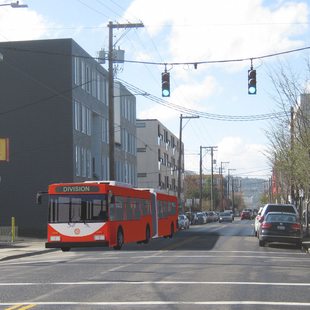 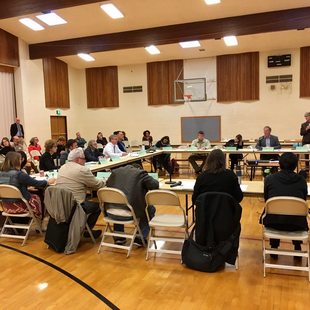