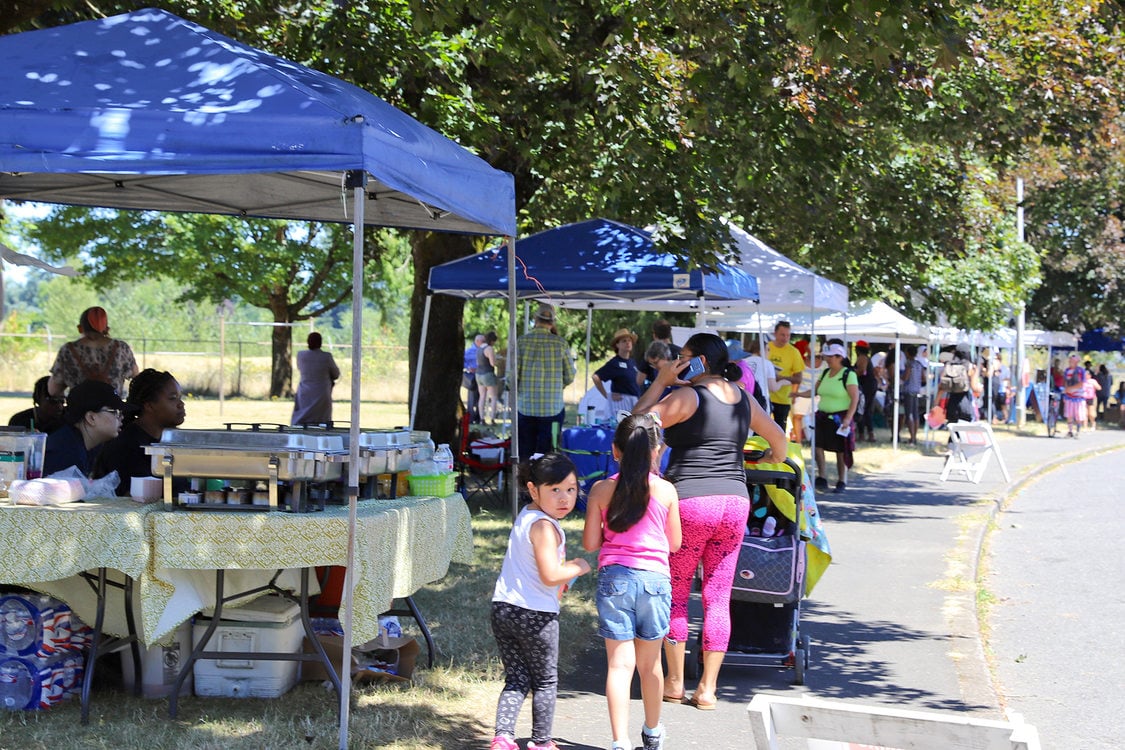 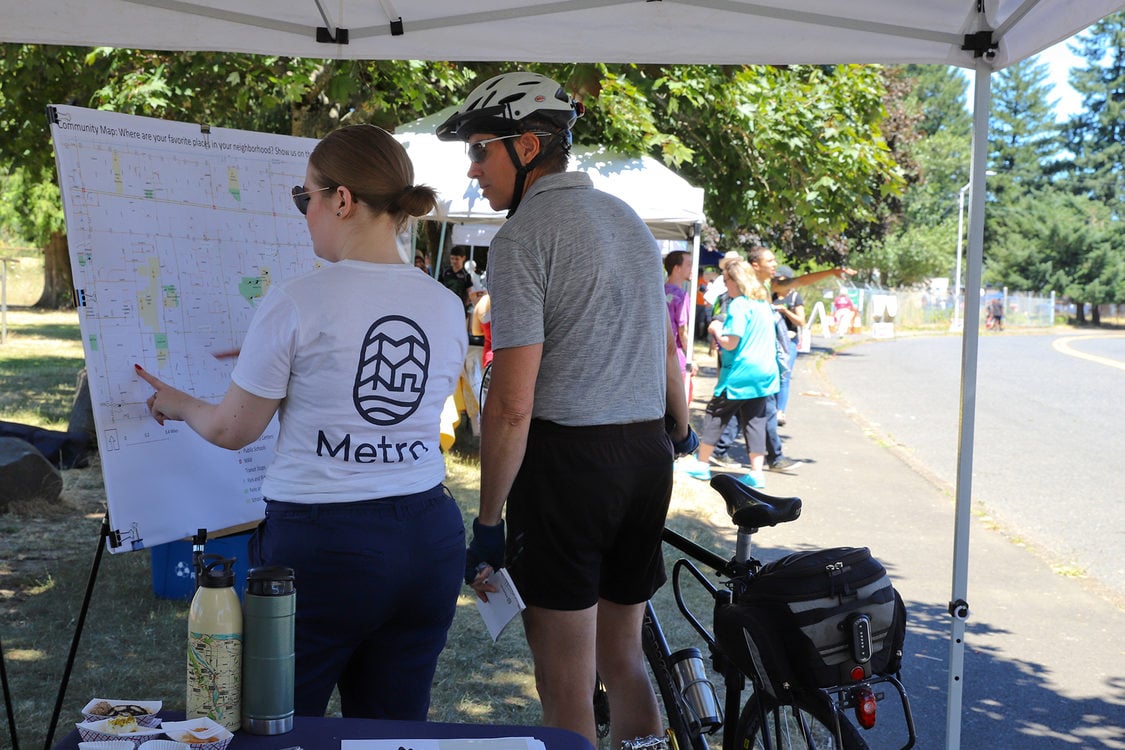 A Metro planner shows destinations on a community map of the Rosewood neighborhood.

A Metro planner shows destinations on a community map of the Rosewood neighborhood. 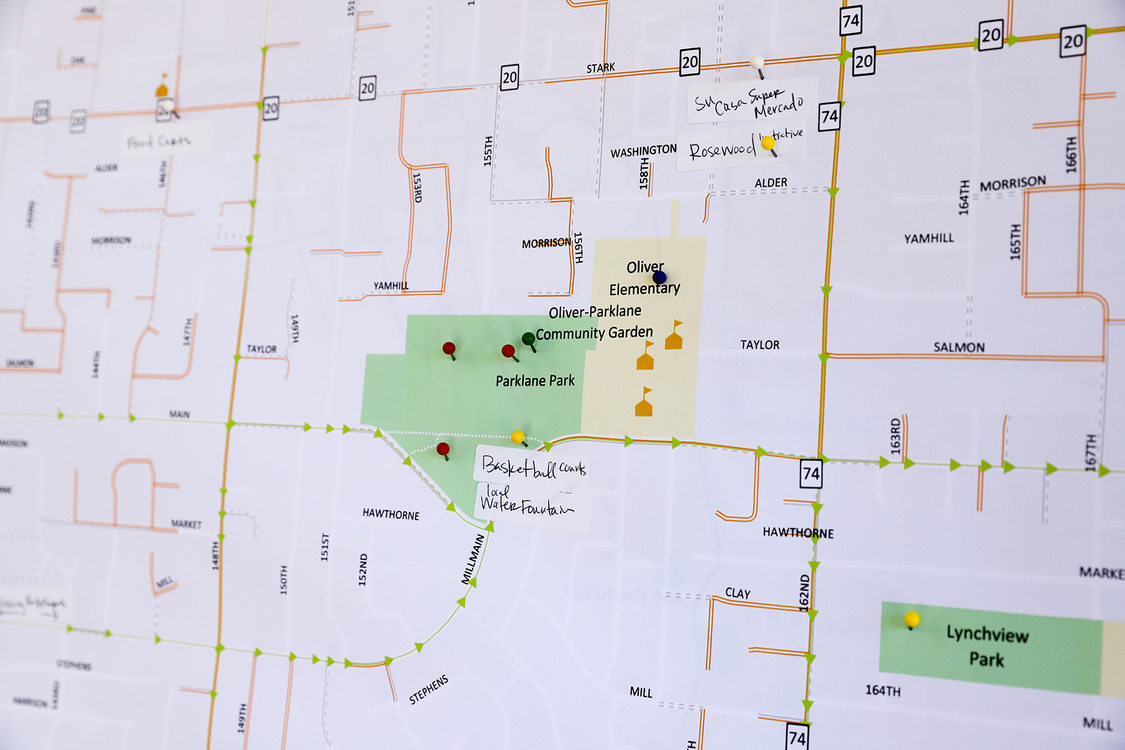 Metro staff show destinations on the community map of the Rosewood neighborhood.

Metro staff show destinations on the community map of the Rosewood neighborhood. 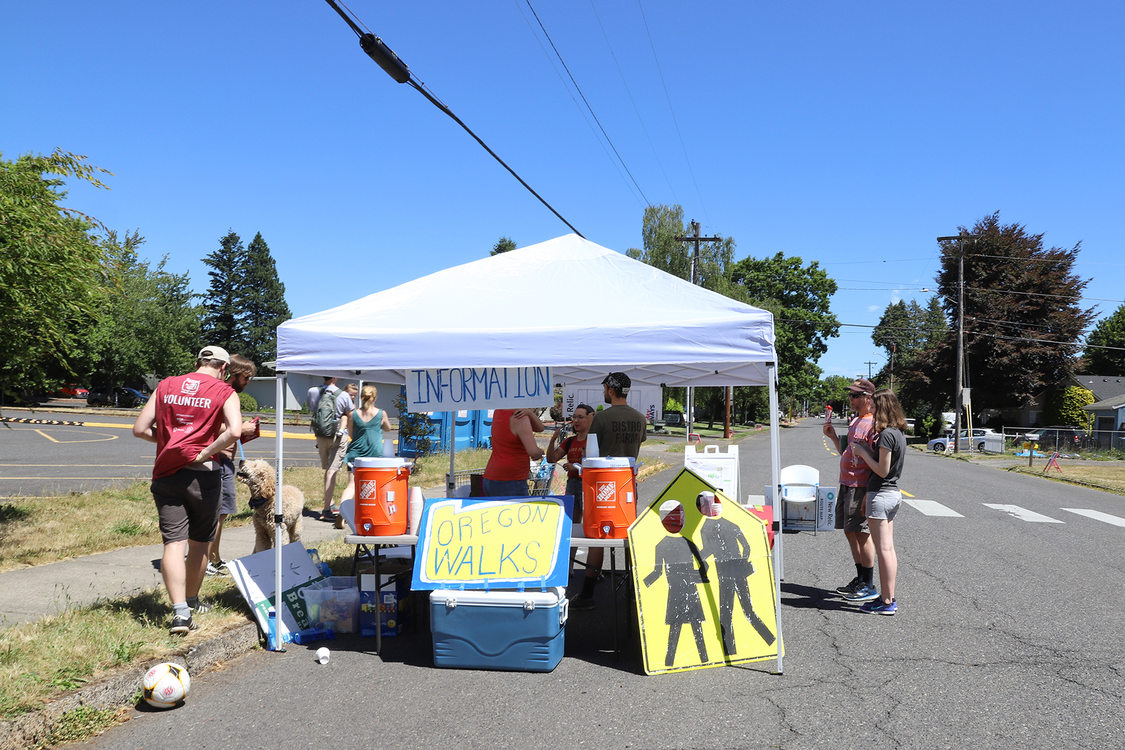 The nearly cloudless sky was a brilliant blue as the sun shined on Parklane Park in East Portland. Children ran between playground equipment and a brightly-colored inflatable bounce house.

Their parents walked along the grass, sampling savory Thai and Somali dishes.

Despite the July heat wave, it was an ideal day to block off the streets and celebrate the diverse community that lives on border between Portland and Gresham.

"People like to walk; people like to cycle,” said Kem Marks, director of transportation equity at the Rosewood Initiative. “They just don't feel safe or realize that it can be possible out here. This [event] promotes that and gets people to, hopefully, get more involved in advocating for that, those kind of investments and changes."

Rosewood Walkways helps people feel safe to be active in their neighborhoods, said Jenny Glass, the executive director of the Rosewood Initiative, which partnered with Oregon Walks.

"It's just an opportunity for communities to take over the streets and not have them be car-centric for a day, but have them be people- and neighborhood-centric,” Glass said.

The Rosewood neighborhood has often been overlooked by decision-makers. But the Oregon Walkways event shows the area's growing visibility due to efforts by community members who have long advocated for improvements.

Metro data from 2010 to 2014 show seven serious injuries took place at the intersection of Southeast Stark and 162nd Avenue:

Data from 2010 to 2014 show the following deaths and injuries took place on Stark between Washington/Thorburn and the East Historic Columbia River Highway:

21 fatal and near fatal car crashes

2 fatal and near fatal bike crashes

7 fatal and near fatal pedestrian crashes

In February, Oregon Walks and the Rosewood Initiative pushed for an emergency speed reduction on Southeast Stark Street, which reduced the speed from 35 mph to 30 mph. In the last two years, seven people have died from collisions on Stark.

The roadway has been identified by Metro as a high-injury corridor, a street where deaths and life-changing injuries are more likely to occur. The junction in front of the Rosewood Initiative, at Stark and 162nd Avenue, is a high-injury intersection.

Kem Marks, director of transportation equity at the Rosewood Initiative, said planners designed the roads in East Portland for cars, without considering safety for people walking and biking.

Road-centric streets make it difficult to fulfill Vision Zero goals to have zero deaths and life changing injuries from traffic collisions by 2035. Despite the campaign’s education efforts, Marks believes Vision Zero is not possible on the streets in Rosewood.

“People are still going to drive fast because this is how these roads are made,” Marks said.

Marks believes Portland reflects two different cities: one Portland that has the roads for safe walking and biking and another that does not. He said community members want slower speeds, more crosswalks and a road redesign that protects the people who share the roads with cars.

Another recent win for the neighborhood is the new TriMet bus line 74 - 162nd Ave. Before the bus route launched in March, there were no north/south buses running between 122nd and 181st avenues, a three-mile stretch in the heart of East Portland.

Glass said people living in East Portland would have to make a horseshoe-shaped trip, heading east or west to catch a bus running North or South. A Rosewood intern who lived only a mile north would have a two-hour commute by bus.

“In a car it would have taken her two minutes, but it took her almost two hours to get to work because she had to take the Halsey bus to 122nd, 122nd down to Stark and then Stark down to Rosewood,” Glass said.

The new service runs every 30 minutes, five days a week from 7 a.m. to 7 p.m., but Glass hopes for more frequent service that extends into weekends and evenings. She said this would benefit people who work in the Columbia Corridor industries, the warehousing and freight jobs that have early, late and weekend shifts.

Hadi Mohammed, who lives in Rosewood, sat in the park on a red blanket. Nearby the Rosewood Baking Club served platters of Middle Eastern sweet treats, almond cakes drizzled with honey and rolled filo dough topped with pistachios.

He loves his neighborhood, he says it is a nice, quiet and peaceful place to live. But the neighborhood is in need of improvements.

Mohammed is a community volunteer with Metro who surveyed fellow residents about their travel habits. When he answered the survey for himself, safety was a big concern. He suggested slowing driving speeds and educating young children how to cross the roads. He likes that the fair promotes street safety and reflects the neighborhood’s rich diversity.

On the afternoon of the event, Mohammed met and surveyed people from Kenya, Libya, Syria and Somalia.

"This [neighborhood gathering] is like a bunch a flowers… because there are different kinds of people and all of them smiling and treating each other friendly and nicely,” Mohammed said.

He found friendship and safety in Rosewood, things that he had lost after the Iraq war in his home country. He worked as an interpreter for nearly seven years and came to the United States with his family as refugees.

“And I am very, very happy to see such society, although mixed from different nations, but it is united," Mohammed said.

“Essentially, although we are different, maybe in our backgrounds, maybe in our religion, we really want the same things,” Marks said. “We want families. We want jobs. We want education. We want to live peacefully next to our neighbors. That's really what it gets down to."

It also comes down to safe streets.  “We want to see safe streets, where people can walk their dog or take their kids to school without having to worry about being seriously injured or dying.”