Each trail name is connected to the its natural, cultural or geologic features to help visitors better understand the space. These names reflect input from Parks and Nature staff and partners, including the Confederated Tribes of Grand Ronde, Confederated Tribes of Siletz Indians and community members who helped design the park.

As the first trail at the park entrance, the Woodland Trail is the path most traveled by visitors.

The trail travels through what is now almost exclusively Douglas fir trees planted when the site was a tree farm. Woodland describes the forest condition we hope to achieve over time – a mixed woodland of fir, oak and madrone – with ongoing site management to support forest health.

Castor means beaver in Spanish. This short trail earned its name because of beaver activity in the area in years past. A beaver dam and den were seen in the small creek below Timber Road, just steps away from this trail. Slide trails, from beavers dragging logs and branches to their dam, have also been seen  on the hillside of what is now called Castor Trail.

Ammefu means “mountain” in Tualatin Kalapuya language. Along this short detour off Timber Road, visitors are awed by a panoramic view of several Cascade peaks on a clear day, including Mount Saint Helens and Mount Adams.

The Ayeekwa Trail meanders along a seasonal stream. A portion of the stream maintains water throughout the year, which is critical to numerous species of wildlife, including black bears, cougars and the ayeekwa, which is the Tualatin Kalapuya word for bobcat. The trail name is a reminder that visitors are hiking through a wildlife area.

Mushroom scavenger hunt, anyone? During the fall, this trail is abundant with several species of fungi, including the bright orange witches’ butter (Tremella mesenterica).

Zorzal is Spanish for thrush, a bird family that includes robins and the varied thrush, an orange beauty that thrives in woodlands. The area along the Zorzal Trail is frequented by several bird species including warblers, flycatchers, hummingbirds and thrushes.

Madrona is Spanish for madrone. This trail descends the ridge before following an existing segment of road to one of the most beautiful areas of the park. The northern part of the site is a diverse forest with some of the largest trees found on the site, including several of the unique and striking madrone tree.

Related stories
The story behind Three Elders at Chehalem Ridge 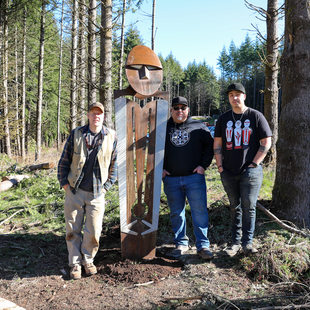 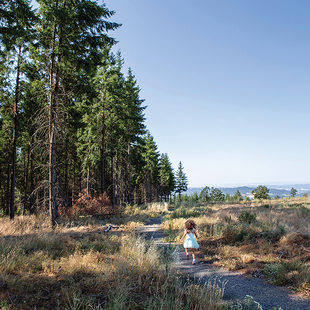