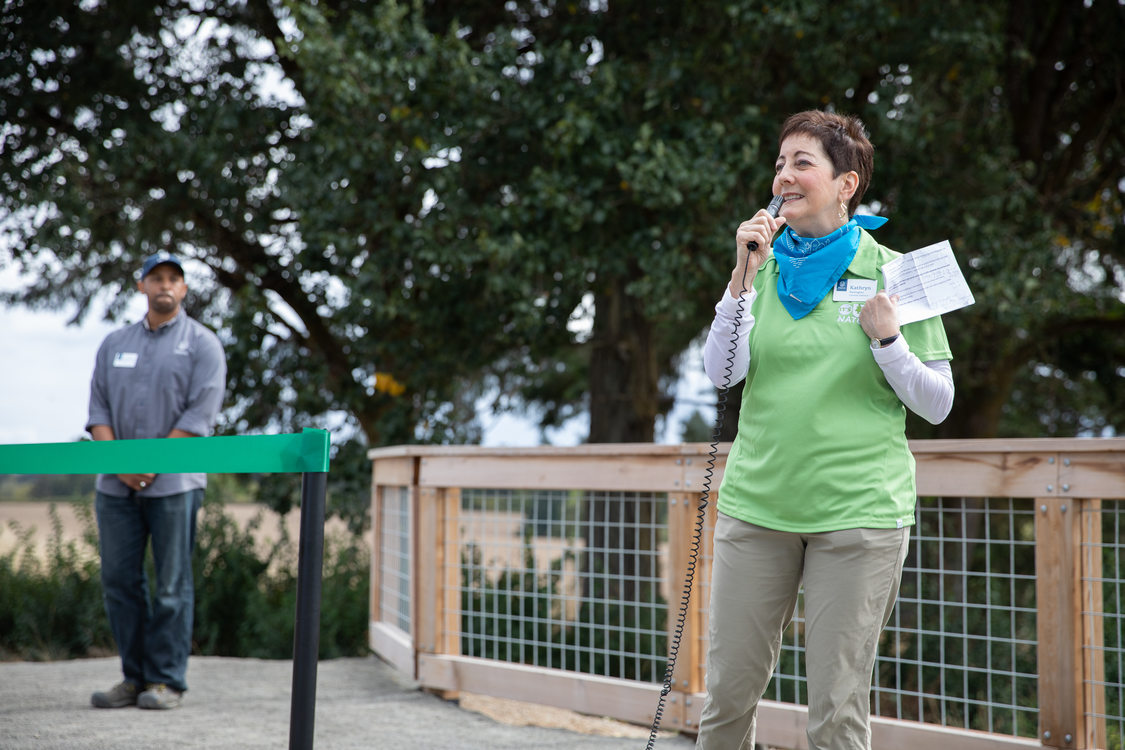 Metro Councilor Kathryn Harrington speaks to the crowd at Killin Wetlands. “Its places like this that help us understand the fragility of nature and how important it is that we work together for future generations so that they have a healthy planet.

Metro Councilor Kathryn Harrington speaks to the crowd at Killin Wetlands. “Its places like this that help us understand the fragility of nature and how important it is that we work together for future generations so that they have a healthy planet." 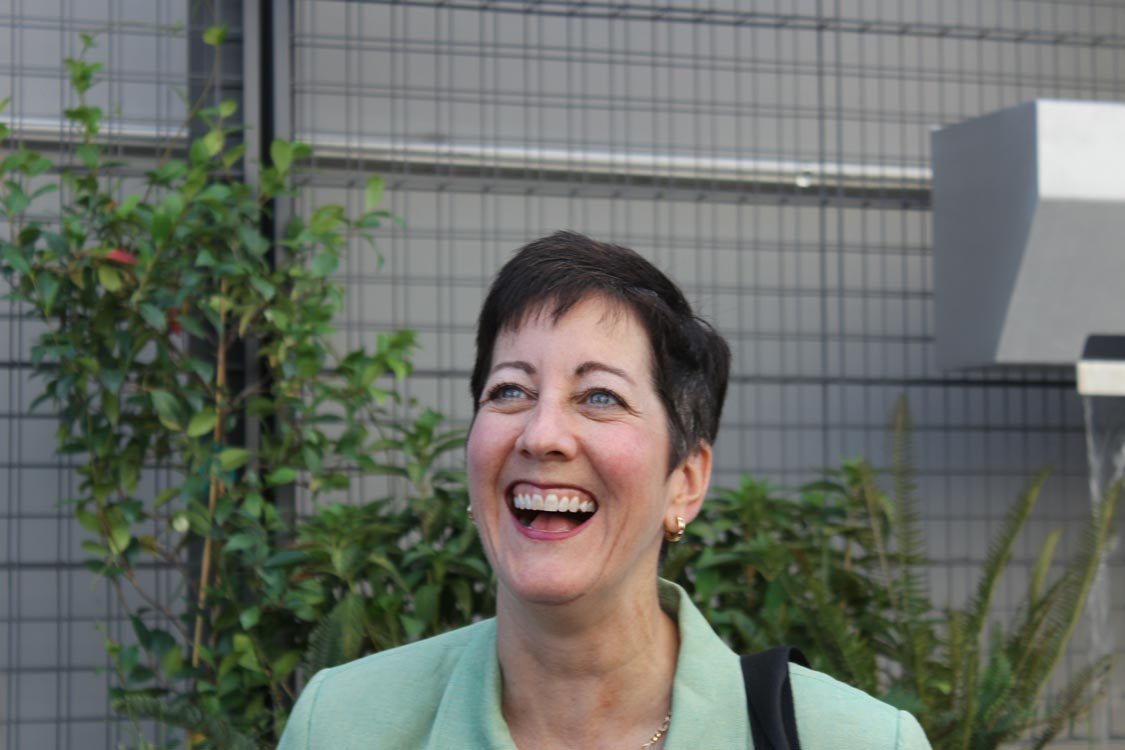 Kathryn Harrington, who was elected to the Metro Council in 2006, looks back on 12 years at the regional government as she prepares to start her term as Washington County Chair. 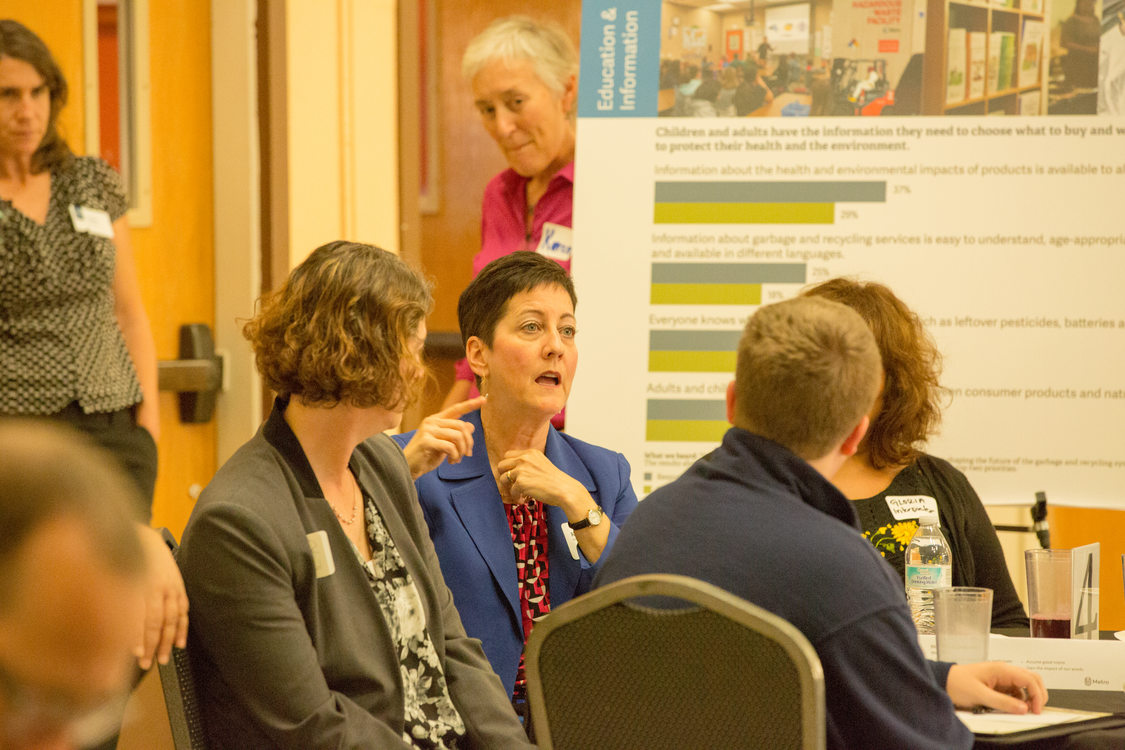 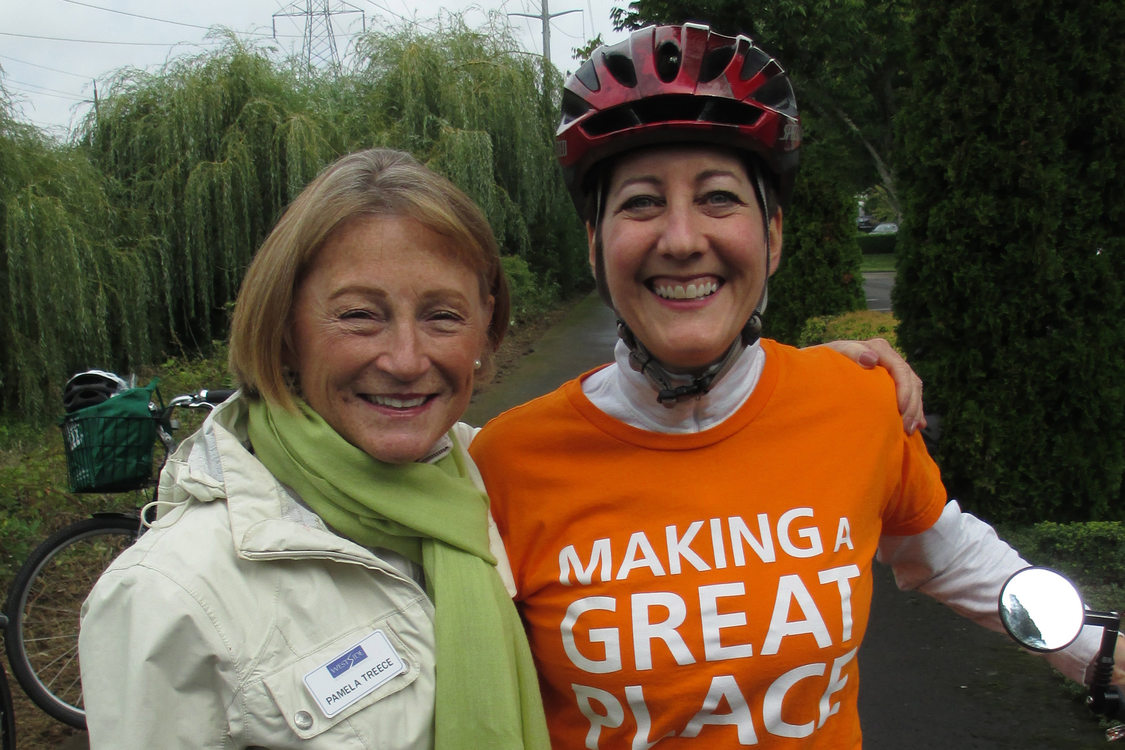 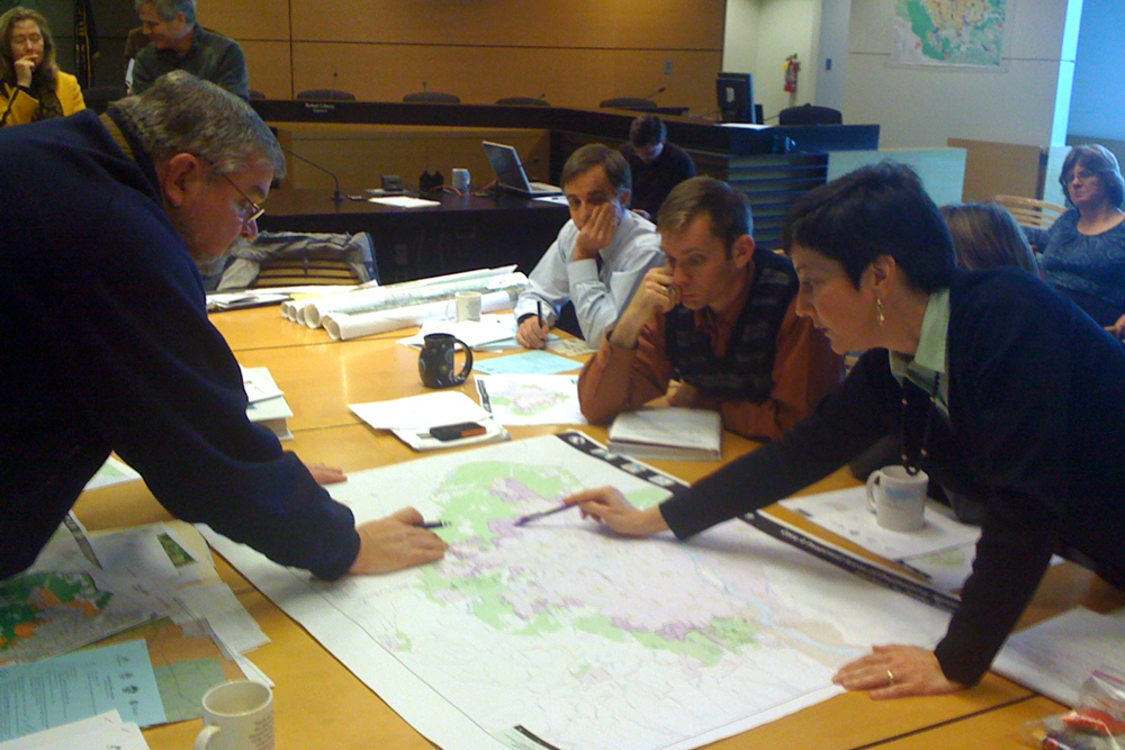 In 2006, retired engineer Kathryn Harrington decided to begin a career in public service, with a particular focus on accountability, transparency and honest public engagement. Twelve years later, she's served a full three terms on the Metro Council, the most allowed under the Metro Charter.

Harrington has worked on several key initiatives, particularly relating to the way the greater Portland urban area interacts with its rural surroundings. The establishment of a 50 year urban and rural reserves plan was led by Harrington. Work to protect the Killin Wetlands near Banks and Chehalem Ridge south of Forest Grove all took place with Harrington's help. Harrington won the Weston Award in 2013 for her advocacy for pedestrian safety.

Here's some of Harrington's highlights from her decade-plus on the Metro Council. Some answers have been edited for brevity.

The employees of Metro are incredibly special people. Everyone to a person embraces the Metro mission and feels passionately about the work that we do. It's not just a job, it's a passion, and I really like how people have been able to have careers here at Metro and do different things.

But another aspect of this that I really like about Metro, being a regional government, we members of the council are – elected six district councilors are elected by districts to make regional decisions, which means we're in this together. I think that's part of what is the Metro culture – we're better off together. We work together. We have a shared future. We have a shared airshed. We have a shared environment. And being a Metro councilor making regional decisions, I've gotten to know the hopes and aspirations of all 24 cities and the urban areas of our three counties that make us a region. And I just love it here. I thoroughly enjoy being an elected Metro councilor and part of this agency.

What is the thing you're most proud of from your 12 years on the Metro Council?

Well, developing and adopting the strategy to advance racial equity, diversity, and inclusion. And it's not just the formation and adoption of that, but how we've put that into practice as an agency and really tried to do a better job of being a government that serves everyone here in our region and makes people's lives better. It took a lot for us to take a serious look at what we were doing and how are we doing it and were we doing it well enough and what is our place in history. How did we find ourselves? And so choosing to develop that strategy, and it took us a few tries over about five years, but we adopted a strategy that is real meaningful for our region, and we've put it into practice and seen the action plans for the different departments now really shows how we're putting into practice this new way of doing business in our communities.

What's your biggest regret from your time on the council?

I don't regret anything. Things that we've tried that didn't work out – those were things we learned from.

You've often said that you're elected locally to serve regionally. What does that mean to you?

Well, it really goes back to the Metro Charter. That the district councilors are elected by the voters of their district, but we have a voter-approved regional charter. So I'm making decisions for everyone in the region, not just for my constituents in District 4. But at the same time, I am very close to my community in Washington County. Not only the communities of District 4 – the four cities and the urban unincorporated areas, but all of Washington County. So it really gets down to that, embracing the regional charter of Metro and making sure that I understand all parts of the region and how to make good decisions for everyone in our metropolitan area.

Why did you run for county chair?

I love Washington County. I absolutely do. It's been a real honor to serve my community. And I feel that my work in serving the community is not done. And when Chair (Andy) Duyck told me he wasn't running for re-election a few years ago that gave me a lot of time to think about what I would do next after my Metro term was up.

It just seemed like the right thing at the right time in the right place, and I pursued it. I'm really pleased that the voters have chosen me to work for them as the chairperson of the Washington County Board of Commissioners, but it's because of that love for Washington County that I chose to run for this position.

How do you expect the relationship between Washington County and Metro to change once you are country chair?

Well, we in the region do collaborate well with one another. I think that the voters in Washington County have made it clear that they do expect improvements in Washington County. They expect us to be more open-minded about doing the work of government here in the 21st Century. That the status quo isn't good enough. So when it comes to the relationship between Metro and Washington County, I think both because of the voters' choice but also because of my time being on Metro, I will likely be far more open-minded to try and understand what are those things that Metro is trying to get us to consider as opposed to being skeptical about it. So I think there is opportunity there. Any transition in leadership is always an opportunity, and I'm really looking forward to it.

When you look at an issue now, how does your Metro Council lens look different from your Washington County Chair lens? Or, are they the same? Do you apply the same set of values and perspectives to these questions or do you expect to?

Well, I think it's a little bit different because being a member of the Washington County Board of Commissioners, you're responsible for the rural areas in a way that Metro isn't. Certainly, Metro has interest in the rural areas, protecting the valuable farm and forest land. Certainly, ownership of a lot of natural areas, nature parks, and whatnot, and biodiversity is definitely in Metro's wheelhouse.

What's your hope for (incoming Metro Councilor) Juan Carlos González, and what advice do you have for him?

Oh, I think he brings a lot to the Metro Council that we haven't had. Having a Latinx on the Metro Council is a great thing. Having a younger Metro councilor is another good thing. I think that being a younger person and helping that younger person understand that we're making long-term decisions – 20-year and 50-year decisions. But the advice that I have for him is to be present in the community and be willing to accept invitations to things that may seem unordinary or not part of Metro's scope and responsibilities. Because the community wants and needs to know what Metro's role is and how Metro works. And since our region continues to grow, we have new people moving here all the time of different ages and there isn't another elected regional government in the country. It's incumbent upon us as Metro councilors to be out in the community and help people know what it is we do and why it's important to their lives.

If you had a magic wand, what's one thing you would change about the Greater Portland region?

Well, I don't really have an answer to this question. For a while, I thought, "Well, would I wave a magic wand and ensure that we had tremendous transit support that was free all across our region, much more available in various parts of the region that it is today given geographic and ridership challenges, or that we would have more connectivity. And then I thought, "Well, wouldn't it be great if we didn't have any more affordable housing challenges or issues with poverty.”

But the reality of it is I don't have a magic wand. And the reason why we do this work is try and make our communities better and practice democracy. And so I don't really have a good answer for you in this. But I think about the future, and I think the future is bright. And I think it's a valuable, incredible opportunity for us to continue working together.

So sorry, I can't give you much more on that question.

What else are you proud of from your time at Metro?

We're a learning organization and always trying to do better for our community. We try to be incredibly open and transparent as an agency. People can call the front desk and they can actually talk to real people who are doing work in parks and nature or working on a transportation plan or urban growth boundary decision or on solid waste. Having the recycle information center. People can talk to real humans that speak various languages. It's a people-to-people relationship. It isn't just some big scary government. So I'm really proud of that. It costs money to do, but we're doing the people's work, and the people have a right to know what it is we're doing, how it is we're doing it, why it is we're doing, and it needs to be accessible to them. And that's just a tremendous gift. And one of the things that I carry with me as one of my most valuable lessons as a Metro councilor to always endeavor to be open and transparent.