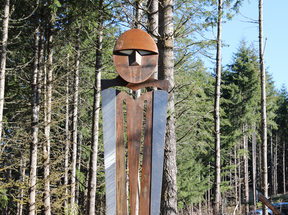 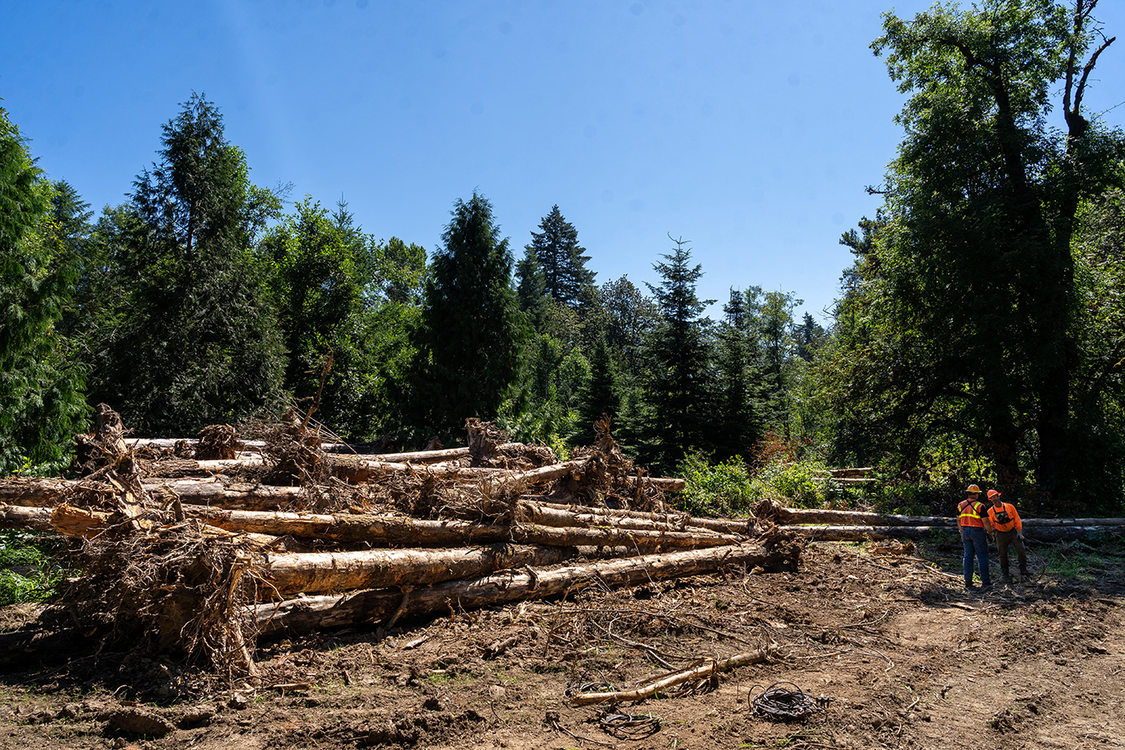 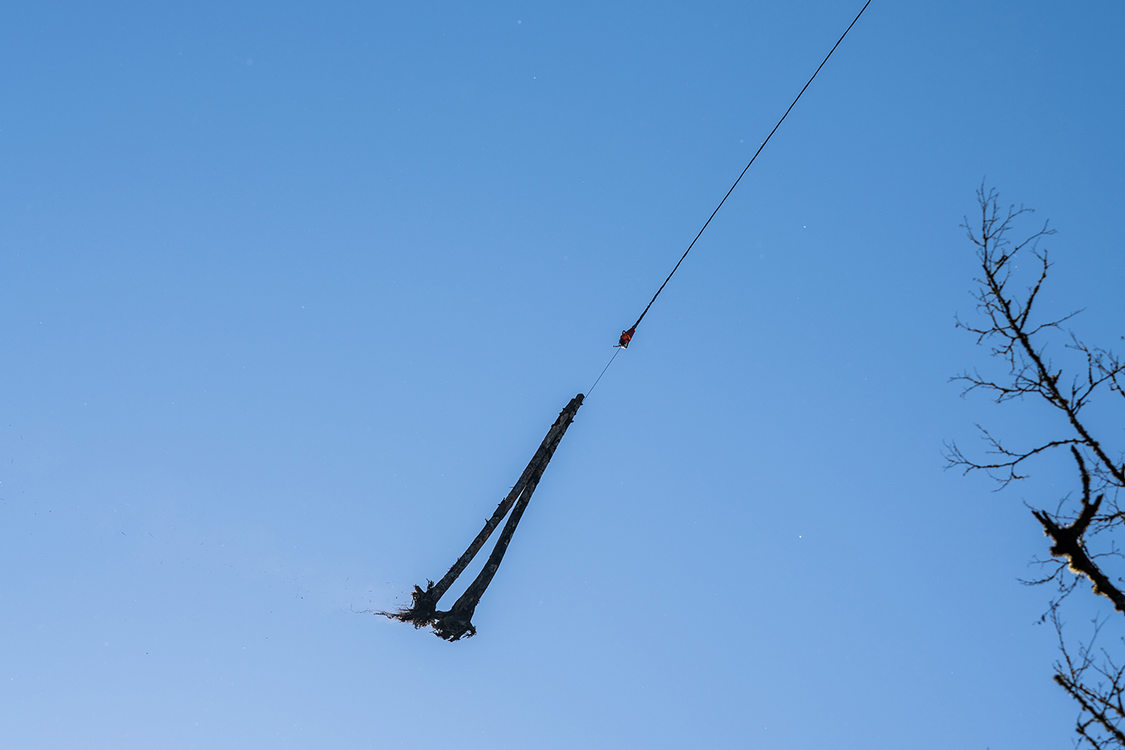 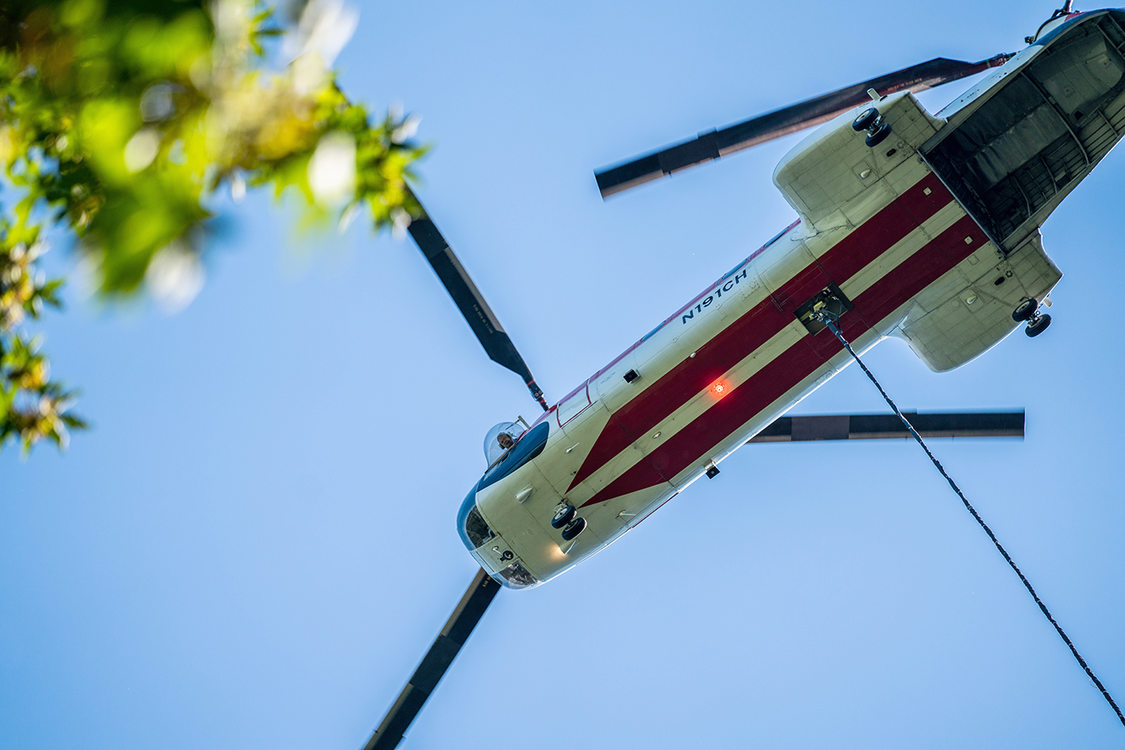 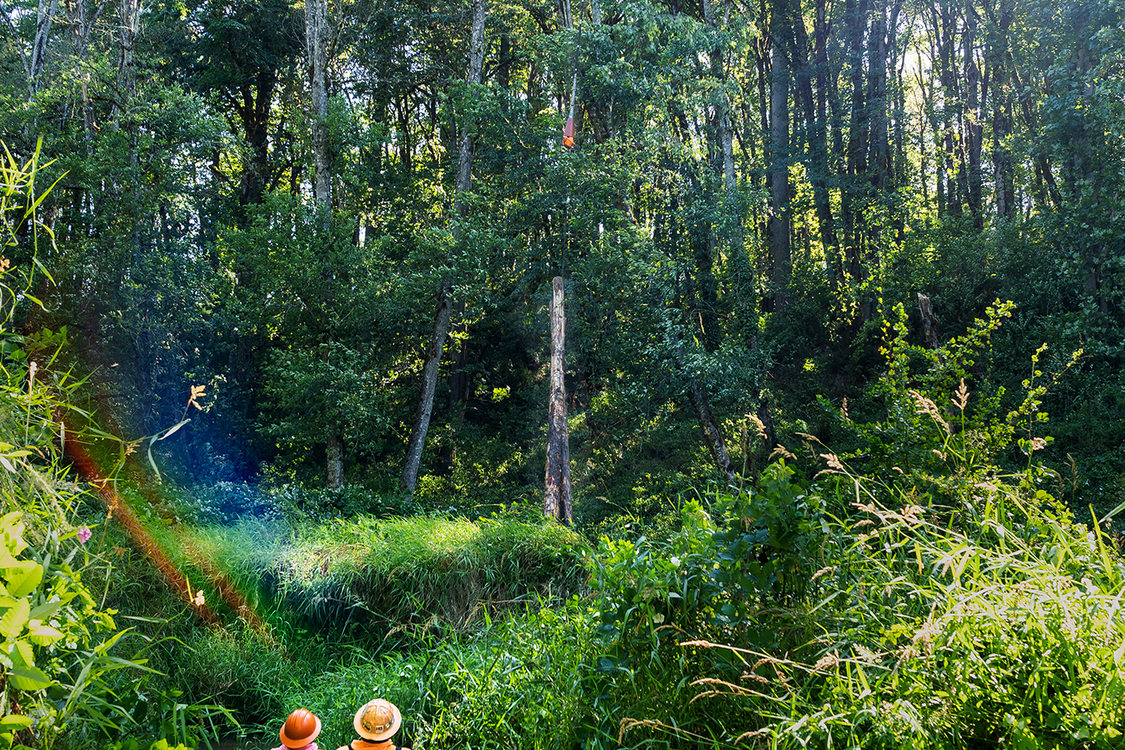 Few people ever see the bottom of North Newell Creek Canyon Natural Area in Oregon City. Even though the property lies just across State Route 213 from one of Metro’s newest parks, Newell Creek Canyon Nature Park, it’s not exactly welcoming to visitors. Unlike its nearby neighbor, it’s not a park, but rather property that Metro owns as part of its conservation efforts. There are no trails, and no easy entry points. To get to the creek, you have to scramble and slide down a steep slope through sword fern, stinging nettle, brambles, fallen branches and mud.

Normally, it’s peaceful down there under a canopy of trees, listening to the birdsong mix with traffic noise from the nearby highway. But on a recent day in July, both sounds were drowned out by the roar of twin turbine engines as a red-and-white Vertol helicopter with two large rotors appeared above the trees—and dangling from it, a 260-foot cable ending in a hook that carried two 30-foot logs, roots and all.

The chopper hovered above a curve in the stream marked on either bank by colored flags, then descended fast, the force of the rotor wash making the trees and the conservation construction crew in the creek bed sway. The swinging logs narrowly avoided the surrounding trees as the pilot positioned the logs between the two sets of flags and then pressed a button to release them. They crashed down into the stream with admirable precision.

These were the first logs placed by the helicopter in a project to build 36 logjams that will serve as shelter for endangered native fish populations and improve water quality in the 66-acre natural area that includes the confluence of Newell and Abernethy creeks. The project is a partnership between Metro, who provided $250,000 in funding, and the Greater Oregon City Watershed Council, who secured $176,000 in grant funding from the Oregon Watershed Enhancement Board.

Brian Vaughn, senior natural resource scientist at Metro, was on site to manage the work and coordinate contractors. These included Columbia Helicopters, whose team would safely place over 100 logs and bundles of brush in the creek that day; Biohabitats, responsible for building a staging area for the helicopters to pick up logs as well as constructing the four logjams on Abernethy Creek; and Inter-Fluve, who do modeling, engineering and design for freshwater restoration projects like this.

Vaughn explained that helicopters are used to place logs in Newell Creek because the canyon walls are too steep for land vehicles. Excavators will build jams along larger Abernethy Creek, which is easier for land vehicles to access. Altogether, he said, jams will be built along 5,800 linear feet (about one mile) of the creeks. This winter, shrubs and trees will be planted along the banks, to help shade and cool the water.

In the canyon, after the helicopter dropped each load, fisheries biologist Mackenzie Butler and ecologist Emily Alcott—both from Inter-Fluve—waded into the creek to check that the logs and brush bundles were optimally placed to provide cover for fish to hide in and around. Logjam designers consider the life stages of fish that use them, what time of year they will be there and how they use them.

Newell Creek originates near Clackamas Community College, flows through the nature park and a culvert under Highway 213 to the natural area, where it joins with larger Abernethy Creek. Abernethy Creek then flows into the Willamette River about one mile below Willamette Falls. Together the creeks are crucial geography for the recovery of coho salmon, steelhead, cutthroat trout and Pacific lamprey that spawn and live in these waters as juveniles before making their way to the ocean for part of their lives.

The logjams help form deep pools and riffles and trap the sediment and gravel that salmon need for spawning. Fish also use logjams to hide from predators, and from water that is too warm or flowing too fast.

“Newell Creek has temperatures that are about 4 degrees colder than Abernethy Creek during the summer months, and the Willamette is generally even warmer,” said Alcott. “This makes Newell an important cold-water escape for fish in summer.”

Alcott is an expert on how rivers move and change over time and on how landforms, water and sediment interact. (Her official title is “fluvial geomorphologist.”) Her aim is to build “logjams that work with the river, to improve habitat immediately but also to provide habitat that the river continues to build on as it moves and changes.”

To do this, she tries to imagine how Newell Creek would have behaved before logging and urbanization, when it still had large trees along its banks, and some of those trees were uprooted by floods or landslides and ended up in the river, forming natural logjams.

Unfortunately, for many years humans viewed logjams as inconvenient or unsightly debris that needed to be cleared out. Logging and development have also decreased the number of trees available to fall into rivers. As a result, young fish are finding shelter scarce. That’s why human-made logjams are necessary.

“We can’t wait 50 years for a tree to grow, get washed into the stream and do its important structural work,” said Jonathan Soll, science and stewardship manager at Metro.

“We need to jumpstart those processes because the salmon can’t wait,” Soll said. “The salmon have told us that there are big problems by the decline of their populations.”

These fish, he continued, are fundamental to the lifeways of the region’s Indigenous communities and tribes. “Tribes have made it clear [to us] that one of their very highest priorities for Metro to invest in is salmon, steelhead, trout and lamprey,” Soll said. “By doing this work we are honoring our commitment to them and to Metro’s core mission to protect clean water and wildlife habitat.”

Tom Gaskill, executive director of the Greater Oregon City Watershed Council, came to the canyon to watch the helicopter at work. “Coho numbers are pretty good this year,” he said, “so now is a great time to improve habitat.” And not just for fish: “Improving the health of the creeks is a benefit for all the wildlife in the canyon.” These include insect pollinators, red-legged frogs, birds, black-tailed deer, coyote, beaver and other creatures who call the natural area home.

“Oregon City is growing very rapidly,” Gaskill said. “If we can get in front of that growth, ultimately we all benefit from a healthier watershed.”

“This,” he said, gesturing towards the canyon, “is the kind of thing we need to be doing more of.”