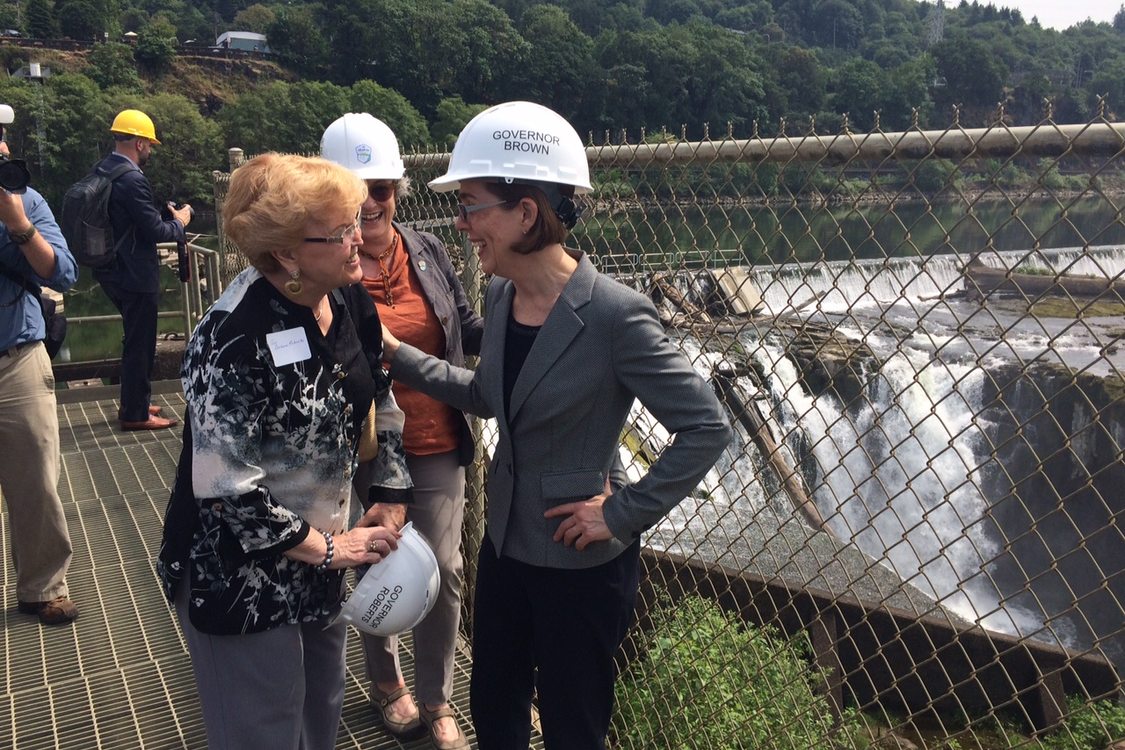 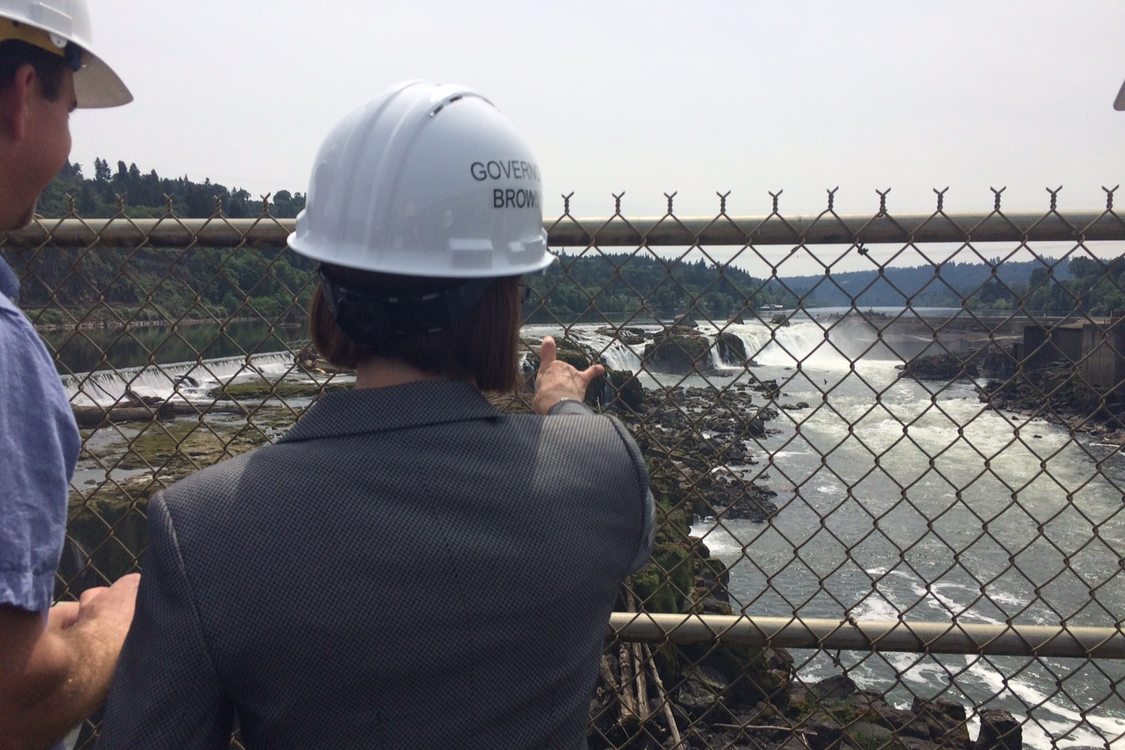 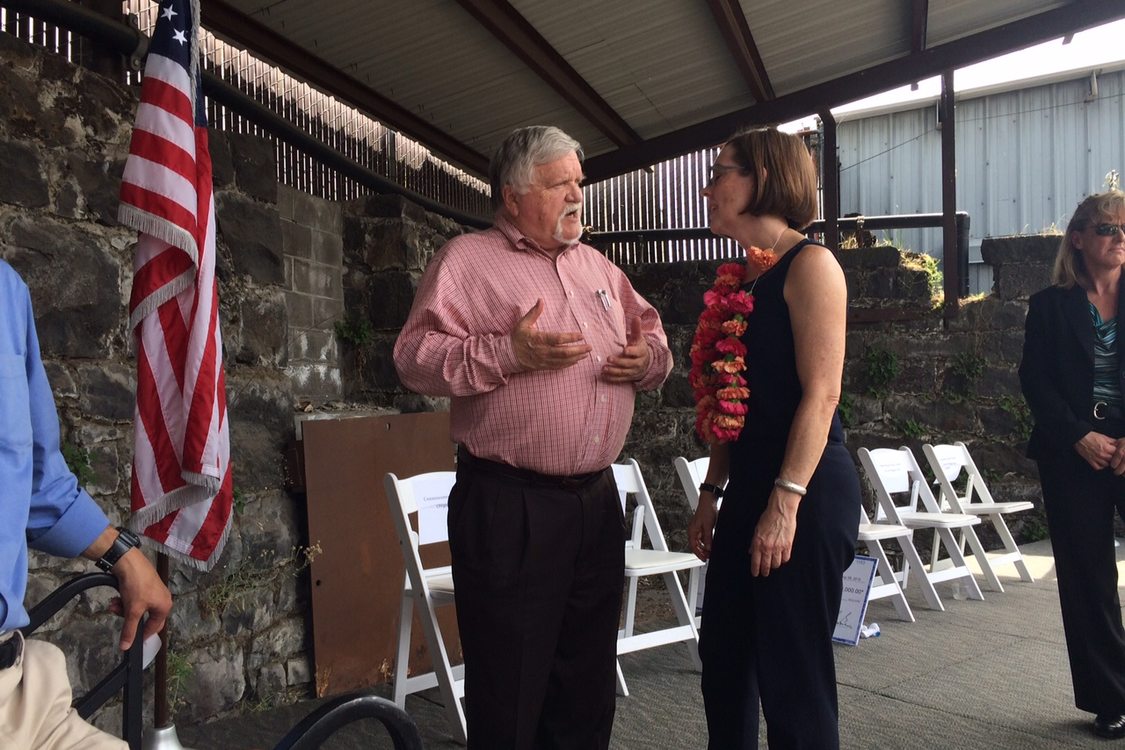 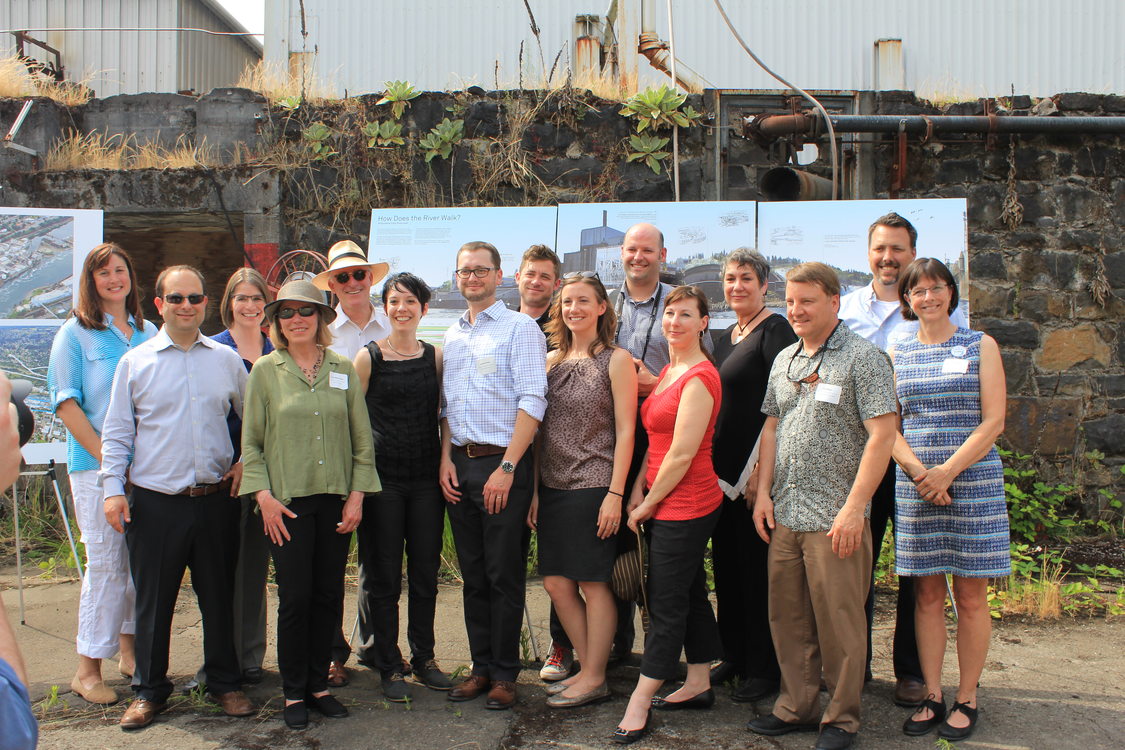 The team of Mayer/Reed, Snøhetta and Dialog, pictured here with Metro staff, will design the Willamette Falls Riverwalk.

The team of Mayer/Reed, Snøhetta and Dialog, pictured here with Metro staff, will design the Willamette Falls Riverwalk. 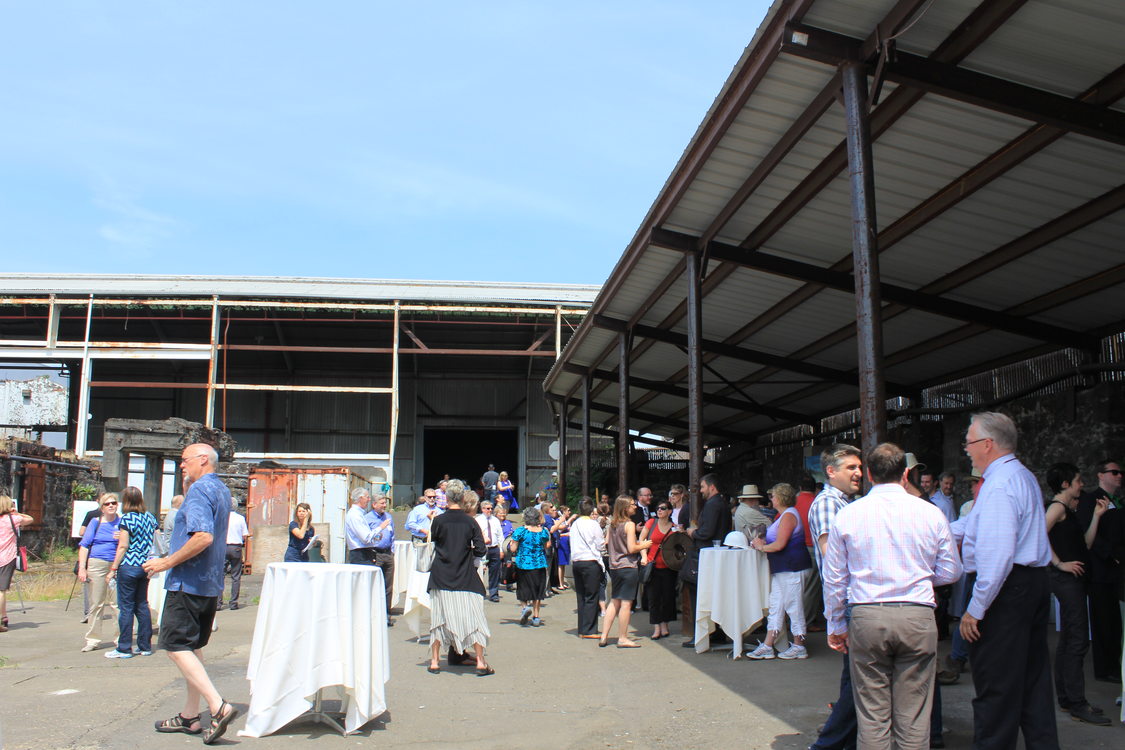 About 150 people attended the reception at the former woolen mill, where Gov. Kate Brown announced the winning team that will design the Willamette Falls Riverwalk.

About 150 people attended the reception at the former woolen mill, where Gov. Kate Brown announced the winning team that will design the Willamette Falls Riverwalk. 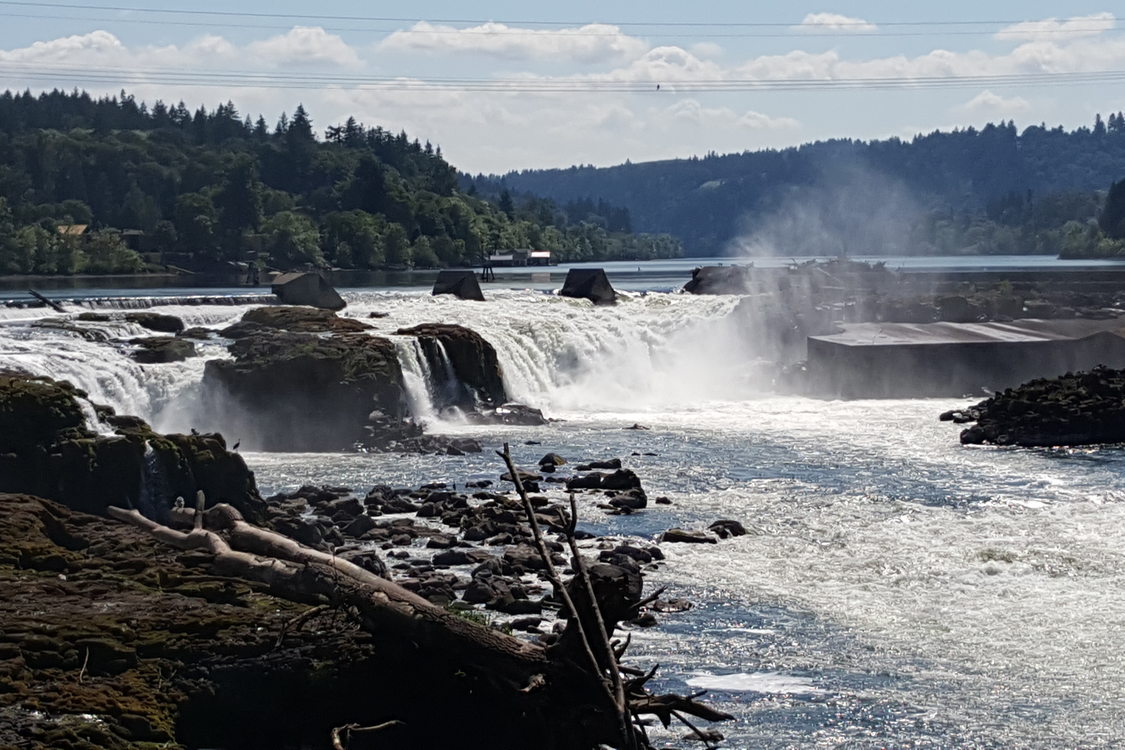 The hulking, rusted buildings of the old Blue Heron paper mill loomed overhead, but it was a great blue heron – the bird, not the company – that caught everyone's eye.

Gov. Kate Brown scrambled on top of a concrete wall to get a better look at the bird, perched on the Portland General Electric dam at Willamette Falls.

The majesty of the falls – one of North America's largest plunges – is itself a scramble, seldom accessible and always requiring a hard hat. But after her tour of the falls Friday, Brown said she hopes that soon changes.

In a reception at the site's historic woolen mill, Brown announced that the four leads of the Willamette Falls Legacy Project – Metro, Oregon City, Clackamas County and Gov. Brown's Regional Solutions Team  – had selected a team to design a riverside promenade to bring the public to the lip of the falls.

The team of Mayer/Reed, Snøhetta and Dialog will design the public walkway along the Willamette River, connecting downtown Oregon City to Willamette Falls.

It's also the birthplace of modern Oregon.

"This is where Oregon began," said Rep. Brent Barton, D-Oregon City, at Friday's event. He compared it to Celilo Falls and Multnomah Falls as places that have been the heart and soul of Oregon since before it was called Oregon.

"This was the place where we came together in trade and built our identity," he said.

Brown, in a speech at the site, also cited Willamette Falls' history.

"Oregon's statehood began here,” she said. The falls are the true end of the Oregon Trail. John McLoughlin made his home here. We milled wool and paper and fed our papers for more than 100 years. This amazing place was the birth of industry in the west, and the site of the first long-distance power transmission in the world."

It's now up to the design team to capture that history. All three names on the team are familiar to Cascadia.

Mayer/Reed designed one of Portland's signature projects, the Vera Katz Eastbank Esplanade. Dialog designed the redevelopment of the Granville Island public market in Vancouver, B.C. And Snøhetta is designing the James Beard Public Market in Portland. Snøhetta is internationally renowned for its work on the Oslo Opera House in Norway and the Alexandria Library in Egypt.

"We think this will become an attraction that people from all over Oregon -- and all over the world -- will come to see," said Noah Siegel, manager of Metro's Regional Infrastructure Supporting our Economy initiative. "The integrated habitat and architecture just made us sing. They thought about bird habitat and fish habitat. They thought about seasonal changes on the river, that the riverwalk should be durable to flooding.”

“They're a truly integrated team that represented the core values of economic development, habitat, historical and cultural preservation and public access to the falls. This was the team that captured it the best."

As the team works on the design for the falls' public access, local leaders continue to piece together funding to build the riverwalk that the design team will propose.

At Friday's reception, Barton called on the Legislature to support the project with money from the Oregon Lottery.

"The governor's presence really reflects her shared belief that it's an important natural phenomenon, and one that needs to be nurtured," Hughes said. "You get the cash because people are inspired by the project, and the inspiration comes from the natural beauty of the phenomenon. Without the collaboration, we'd never be able to coordinate the gathering of that cash and the application to a public project."