The recovery rate is a measure of all the waste thrown away, and then how much of that is recycled, composted or used to produce energy, including everything from food scraps and construction waste to home recycling.

Nearly half of what Portland-area residents and businesses threw away in 2016 was recycled, composted or used to make energy. At 48 percent, the number is down five percentage points from 2015.

The number is what’s known as the recovery rate. It’s a measure of all the waste thrown away, and then how much of that is recycled, composted or used to produce energy, including everything from food scraps and construction waste to home recycling. The Oregon Department of Environmental Quality works with local governments around the state to track the numbers year to year and released the 2016 report this week.

The numbers for greater Portland include Clackamas, Multnomah and Washington counties.

If you look back at 2015, you’ll see the recovery rate was reported at 59 percent. That’s because up until now, recovery rates included credits for operating state-certified waste prevention, reuse and residential composting programs. But because of changes in state law, 2016 is the first year the department of environmental quality is not applying credits for those programs. Those credits accounted for a boost in previous years’ rates of about six percent. So, for comparison, the 2015 rate, calculated according to the new formula would have been 53 percent.

But 2016’s recovery rate is still down from 2015 by five percent. Matt Korot, Metro’s resource conservation and recycling manager, says that’s largely because greater Portland saw a big drop in the amount of wood waste that was recovered in 2016. In fact, numbers show wood recovery alone down by about 98,000 tons — a drop of 44 percent since 2015.

Korot explains why: In late 2015, the WestRock paper mill in Newberg closed. That mill used to buy much of the wood waste collected in the greater Portland area and burn it to power its papermaking operations. When it closed, some of that wood waste was, and still is, routed elsewhere, but the overall amount that could be recovered was reduced.

While the Portland area may continue to see a decline in demand for wood waste as a fuel, more opportunities are emerging to salvage some wood for reuse. The City of Portland for example, now requires that houses or duplexes built before 1917 are fully deconstructed rather than demolished, and that reusable materials are salvaged.  As deconstruction rates grow, so do outlets that buy and sell reclaimed building materials including painted wood.

Taking into account the new rate calculation formula and the changes in wood recycling, this year’s recovery rate is “in a holding-steady pattern” says Korot.

Some numbers are still puzzles to solve

There was a surprising drop of 16 percent in the recycling rate of corrugated cardboard — the stuff used to make cardboard boxes. This waste category has grown along with online shopping, and generally tracks with the economy – as it grows, people tend to both buy more, and throw more away. Because of that, this number was expected to continue rising as it has in recent years, or at least hold steady. “Frankly, its counter-intuitive,” says Korot, “we’ll be working with DEQ to figure out what happened.”

The state’s 2016 numbers also show a 39 percent increase in food scraps recovery in greater Portland, while Metro’s data indicate essentially no change from 2015 to 2016. “We’ll be looking into why our numbers are different,” says Korot. Slow growth in food scrap recovery rates is one of the reasons Metro is looking at requiring some food-related businesses to separate food scraps from garbage.

And what about the big item on everyone’s mind – plastic? Recent changes in global recycling markets mean that plastic clamshells – those hinged containers that hold cherry tomatoes and deli salads – can’t be recycled. The market changes so far haven’t affected most of what we recycle, so there won’t be much of an impact on the 2017 recovery rate. But, says Korot, for Metro, keeping plastic out of the waste stream is a high priority. “We’re focused on planning for this and getting as much ahead of it as we can.”

The amount of overall waste in 2016, that is, everything that is thrown away regardless of what bin it goes in, is also higher this year – both in greater Portland and throughout Oregon, with an increase of nearly three percent statewide. At the same time, that number declined on a per person basis in greater Portland. That doesn’t necessarily mean that each person is throwing away less – those numbers aren’t tracked – it means that the total waste divided by the number of people living here resulted in a lower number this year.

Korot says that recovery rates “are a proxy for the environmental benefits that come from recycling.” Keeping cardboard, plastic, scrap metal and other materials out of the landfill, he says, is good for the environment because it reduces the demand for energy and raw materials needed to make new products.

And reducing impacts on climate, says Korot, is the most important benefit.

The state recovery report includes calculations of energy saved and greenhouse gas emissions avoided by putting materials to use instead of sending them to the landfill – which ultimately reduce impacts on climate change.

Korot extrapolates from those numbers: In 2016 in greater Portland, greenhouse gas emission reductions from recycling, composting and creating energy were comparable to eliminating the tailpipe emissions from approximately 350,000 passenger vehicles. 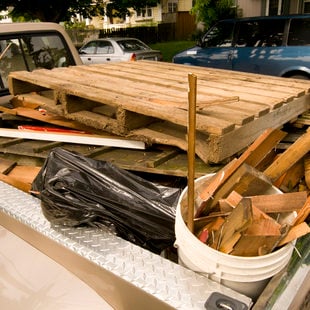 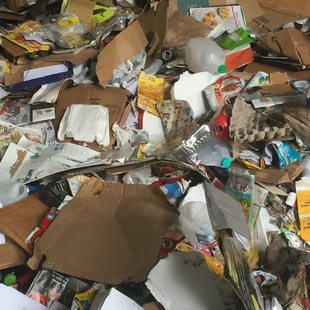 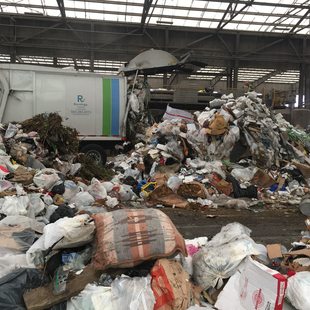