Survey: Help choose stations for a better bus between Portland and Gresham 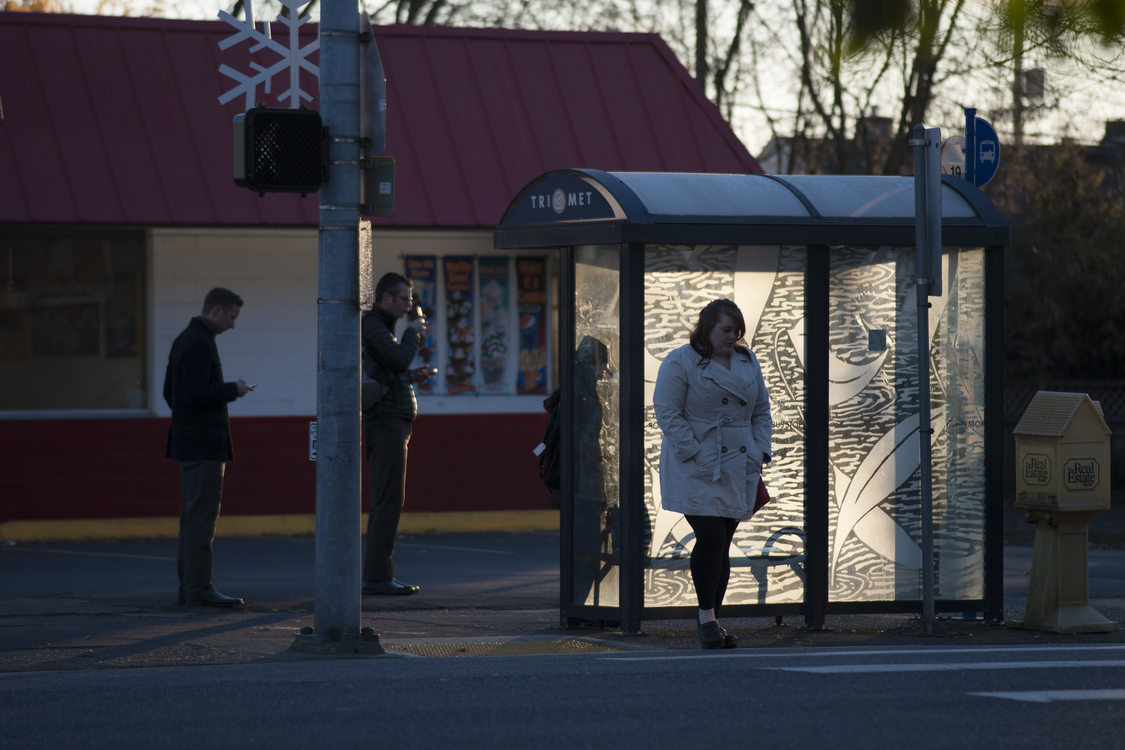 The quality of bus stops vary widely. Some have shelters, benches and lighting. Some don't. Bus rapid transit brings a more comfortable, reliable station experience. But where should it stop between Southeast Portland and Gresham?

The quality of bus stops vary widely. Some have shelters, benches and lighting. Some don't. Bus rapid transit brings a more comfortable, reliable station experience. But where should it stop between Southeast Portland and Gresham? 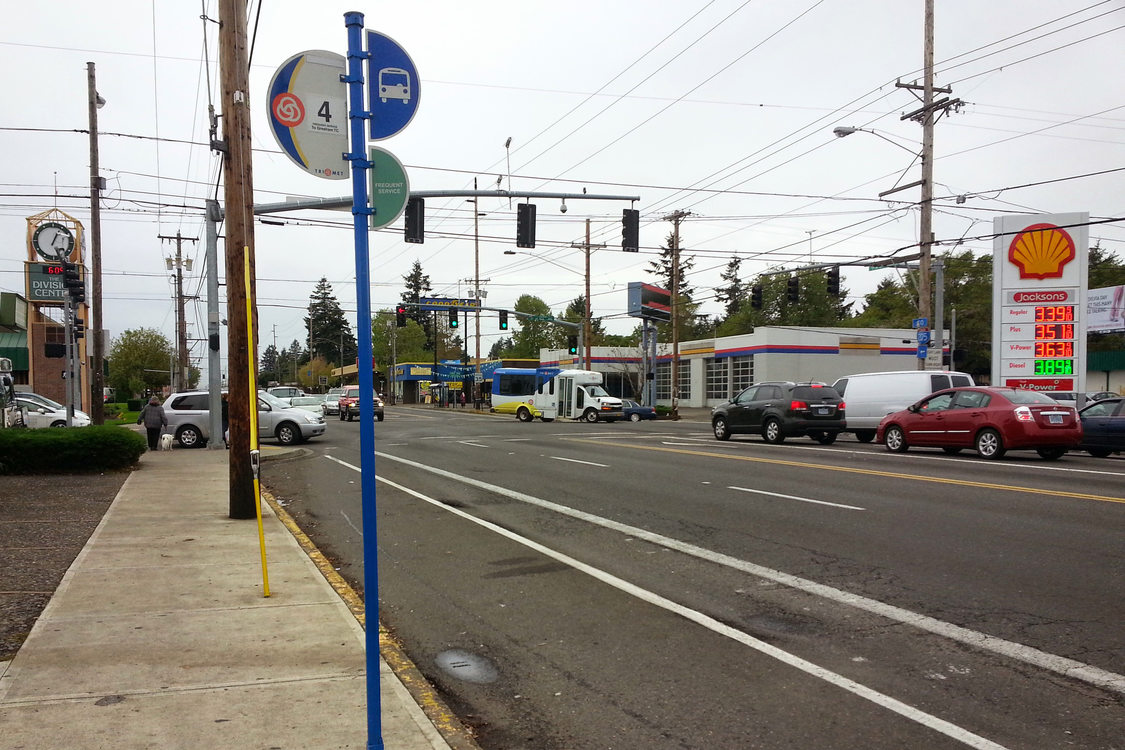 Many bus stops in the Powell-Division corridor look a lot more like this one: a blue post, maybe with schedule information, but nowhere to sit or take shelter from the rain. Bus rapid transit stations would have shelters or other weather protection, benches and better lighting, as well as easier access to get on transit vehicles. 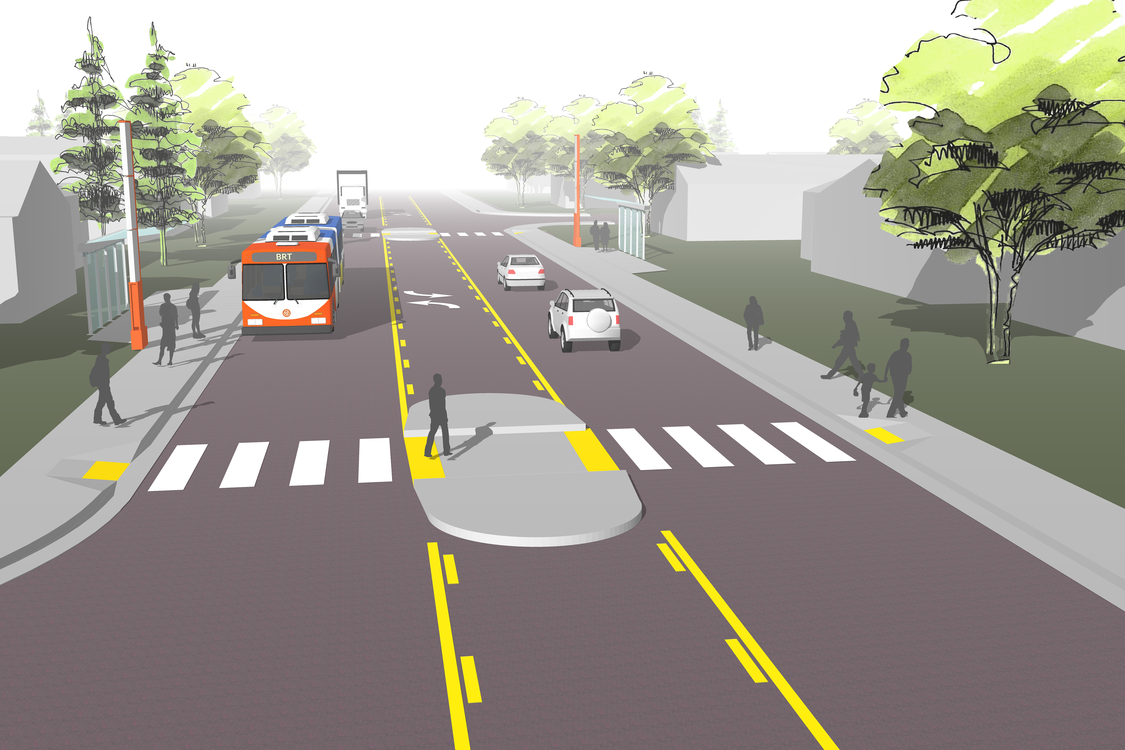 A potential stop design for right-boarding three-lane configuration being considered for Cleveland Avenue.

A rendering of a potential bus rapid transit station and bus in Gresham. 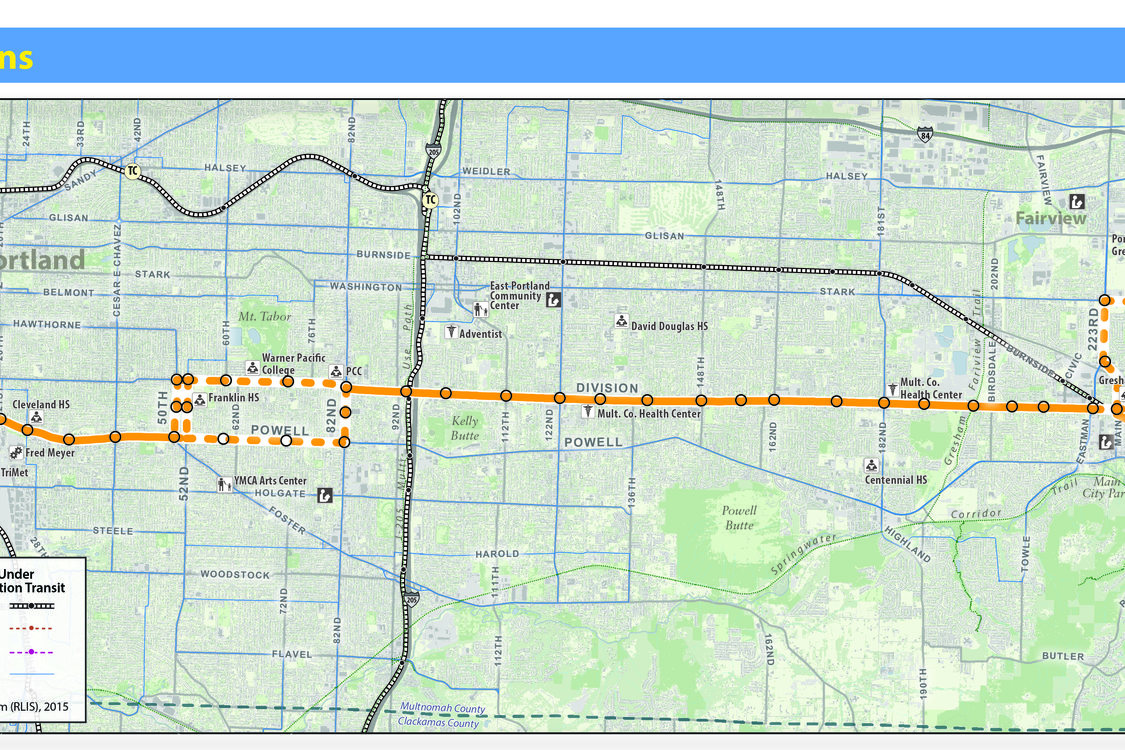 Schools, colleges and major commercial destinations are all part of a map of the potential route and station locations for the Powell-Division bus rapid transit line. Weigh in now through Jan. 8.

Powell-Division bus rapid transit would use inner Powell Boulevard and outer Division Street, plus part of Stark Street in Gresham, to connect downtown Portland to Mt. Hood Community College. Planners have identified several dozen potential station locations based in large part on where bus riders currently travel in the corridor. (This is a detail of that map; see the full map below.) Riders and community members can share their reactions and ideas in a new survey.

Survey: Help choose stations for a better bus between Portland and Gresham

A faster kind of bus transit could soon come to the region's eastside.

Bus rapid transit could help people get to class, work and other destinations more quickly and comfortably along inner Powell Boulevard and outer Division Street between Portland and Gresham, as well as part of Stark Street to Mt. Hood Community College.

But where do riders need stations to get where they're going?

Leaders and planners for the Powell-Division Transit and Development Project hope community members and transit riders in the corridor will help answer that question over the next several weeks.

People can weigh in through an online survey now through Jan. 15. The survey is available in five languages.

Weigh in: How can bus rapid transit help you?

The station location survey is open through Jan. 15. It is available in five languages.
Take the survey

People can also order a paper copy of the survey in these languages by calling 503-238-7433 and selecting option 5.

TriMet plans to post signs promoting the survey in several languages on every bus stop on the potential route of the bus rapid transit line, which would be the first in TriMet's system.

Planners from TriMet and Metro have released a proposed map of stations they say would serve 74 percent of today's bus riders at the same locations they get on and off now – just with an improved experience. The rest would find a new station within around three blocks of their current bus stop.

But what do riders and travelers think? Are these the right locations to consider? What would help people get to the new stations? Would some people be willing to walk further for a faster trip?

A better bus, a different experience

Most of the bus rapid transit line would be along the inner portion of Trimet's No. 9-Powell bus and the outer portion of the No. 4-Division, but also parts of other lines, depending on what route is chosen.

TriMet isn't yet making plans for changes to existing bus service on the new bus rapid transit route, but we do know this: all of Powell and Division will continue to be served by transit every 15 minutes or better.

After the bus rapid transit line is approved and funded, TriMet will lead a more extensive conversation with the community, including exploring the possibility of more north-south lines to connect to jobs and homes in other neighborhoods.

Some have shelters and benches. Some are well-lit. But most are simple: blue poles beside a busy street, sometimes without a safe crossing to the other side or easy access for people with disabilities.

A bus rapid transit station looks and feels different for the rider. Every station has benches, better lighting and shelters or other weather protection. They are easier to access. When a transit vehicle arrives, riders can get on more easily and comfortably.

​The experience is more consistent and more reliable, helping people better plan the trips they need to make to class, work or other destinations, with more confidence they will arrive on time.

To achieve that higher service, bus rapid transit spreads its stations further apart than the average bus stop, in part because pulling over repeatedly every few blocks slows a bus down considerably.

Today, the average bus rider along what could become the bus rapid transit route goes a little more than three miles, though some riders travel shorter distances and some go farther.

Planners started studying potential station locations by identifying key destinations and transfer points in the corridor today and researching where riders get on and off the bus now, with additional attention to places where buses' wheelchair ramps are deployed.

People taking the survey can:

The project's 22-person steering committee – including community representatives and elected officials from throughout the corridor – will discuss input at its Feb. 1 meeting. The committee is expected to recommend a final route and station map by March.

Construction for the line could begin in 2018, with opening expected as soon as fall 2020.

Note: This story has been updated to reflect a one-week extension for the station survey.